The falcon above Blakeslee Vineyard in Sherwood circles intently, riding an air current and occasionally flapping her long wings before diving toward earth. She plummets not toward an unsuspecting songbird or rodent but to the leather-clad arm of Alina Blankenship, a master falconer and owner of Sky Guardian Falconry. Blankenship has called the falcon back for a reward during its long day doing its job: flying over vineyards and other agricultural sites to provide a natural, humane form of pest control.

There are certainly organisms that are helpful in the process of making wine — the yeasts that cause fermentation being the most obvious example. But there are plenty of critters that are not so helpful. Throughout the year, voles, gophers and other rodents may disturb soil and make it harder to grow commercial crops; while starlings, robins and other birds love to munch on juicy, ripe grapes.

To help keep these nuisance birds under control, some vineyard owners have either brought birds of prey to their sites during harvest or encouraged birds to live on the property year-round. An additional benefit to having these winged beauties on site is their ability to delight wine club members and provide educational opportunities for community members.

Blankenship has been using her falcons professionally for five years now; her business partner, Justin Robertson, has engaged in this practice since 2010 through a company called Max Yield. A person who aspires to a career in falconry-based avian abatement can’t just go out and buy a bird of prey. They have to complete a two-year apprenticeship with another master falconer, carrying on a tradition that began in the Middle East. Once a person has completed their apprenticeship, they can apply for a license — in Blankenship and Robertson’s case, from the Oregon Department of Fish and Wildlife — to own a raptor.

Lila, a gyrfalcon waits for a signal from Justin Robertson of Sky Guardian Falconry. ##Photo by Kathryn Elsesser

“Falconry was known as the sport of kings and dates back almost 4,000 years and is the oldest field sport known to mankind,” says Blankenship. But in addition to hunting and recreation, the birds can be used to scare other winged creatures out of places they aren’t wanted: warehouses, shopping malls, downtown areas and places where people grow food.

Because the threat of being eaten by a bird of prey is very real to smaller birds, they scatter quickly as soon as one of Blankenship or Robertson’s falcons enter the sky. The challenge? The smaller birds aren’t scared off for long.

“The birds are smart enough to figure out that when my falcon is sitting on a pole, he’s less of a threat than when he’s flying, and he’s less of a threat than when he’s hunting,” Blankenship explains. She likens it to a robber thinking about holding up a store at the mall. If that person sees a security guard one time, they know they’ve found a good target. If they see the guard sitting by the same door all the time, they’ll find another door.

“If you see that security guard chase down a robber and shoot him, they’re going to find another mall,” she says. That’s the threat her birds pose when sailing through bright blue skies.

To keep birds from eating vineyard crops, Blankenship has to spend an entire harvest season — which can be four to six weeks when she’s working with grapes — flying the birds to give the appearance that they’re looking for food. She works dawn to dusk, seven days a week to make sure predators don’t settle in. “It’s a pretty arduous job for a falconer to maintain those hours,” she says. “But it is what it is. You cannot protect a jewelry store on Monday, but not on Tuesday and expect to have anything on Wednesday.”

Susan Crum, owner of Tanager Vineyard and a master falconer since 2019, is able to keep falcons on the property year-round. She learned about the tradition through spending time in the Middle East during her career in the U.S. Air Force. The hunting part of falconry didn’t appeal to her, she says, but the birds did.

In 2011, Crum worked her first harvest at Tanager, located in the Yamhill-Carlton AVA and under a long-term vineyard lease with Ken Wright Cellars. It was a late year, and birds ravaged the crop. “My career was in the Air Force and the security forces, and it bothered me that something was stealing from right underneath my nose,” she says. “I was talking to Ken, and he mentioned they were using bird of prey in California over vineyards.” She completed a two-year apprenticeship with Kort Clayton of Portland’s Integrated Avian Solutions in 2014, after which she was able to get a license to own falcons.

“We’ve been protecting the crop that way ever since,” Crum says, who now has four birds. “It’s been very successful.” When starlings or other pests see the shadow of a falcon overhead, “it’s easier for them to leave and dine somewhere else. It’s like seeing a flying scarecrow that can actually kill you.”

Falconers use different birds with different personalities and abilities depending on what needs to be done. “Robins cause the most problems,” Crum says. Her Peruvian aplomado falcons are great at flying through the vineyard rows to chase them away.

At Sky Guardian, Blankenship and Robertson own 30 raptors because “we need the right golf club for the swing,” she says. “Each species and each individual has its own specialties and capabilities. A different bird is employed when there is a flock of 30,000 starlings than when there are a handful of robins hiding in the rows.”

Besides her falcons, Blankenship enjoys taking her Harris’s Hawk into the field. “It doesn’t behave like a hawk should, according to the local birds. He’s nimbler and he has the ability to scare and confuse them. The surprise element is why I use the Harris’s Hawk.” Blankenship has also taught some of the birds to fly with drones so they can work together to defend crops. 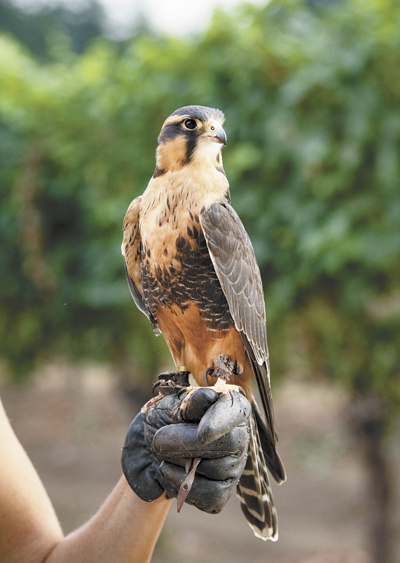 From vineyards and other agricultural companies that can’t or don’t want to hire an avian abatement company, Blankenship consults with them on ways to attract raptors to the site permanently. Outside Eugene, King Estate has done just that. Managers have put out nesting boxes to provide areas where owls and other birds feel welcome. The winery has also partnered with the Cascades Raptor Center, a local wildlife rehabilitation center, to release raptors on the property.

Ray Nuclo, director of viticulture for King Estate, appreciates raptors’ help in deterring birds for the three or four weeks around harvest. “We also want to utilize their predation of various moles and gophers and voles,” he adds. “Voles have been a really big problem throughout the Willamette Valley the last three or four years in a number of crops, including grapes. That’s more of a year-round battle.”

As a scientist, Nuclo is remiss to say for certain that having resident raptors helps with pest control. However, “it certainly can’t hurt, and they need a place to be released and the idea is it must be helping,” he says. As a Biodynamic farm, King Estate is not supposed to bring outside inputs onto the farm, so any help with pest control is much appreciated.

Owners Scott and Annie Shull at Raptor Ridge Winery also work to support birds of prey on their Chehalem Mountains estate. “(We are) a sustainably-focused winery, and as such, we encourage our birds-of-prey neighbors to live here and provide natural balance to the environment,” says Wallace McKeel, national sales manager.

The site is naturally a prime nesting and hunting location for red-tailed hawks, peregrine falcons, ospreys, bald eagles and other raptors. It’s also home to birds such as barn swallows, which eat mosquitos and other bugs. To attract them, the winery has put up nesting boxes around the property, much to the delight of the local birdwatching groups that enjoy spending afternoons on the winery’s appropriately named “Flight Deck.”

The birdwatching at Raptor Ridge occasionally goes beyond natural sightings, too. The winery has partnered with groups such as Wings over Wine and the Portland Audubon Society for special events. “In 2016, we were the site of a red-tailed hawk release, and in 2019, a rehabilitated barn owl was returned to the skies at Raptor Ridge,” said McKeel. In May, the winery held an educational “meet and greet” with several birds. Guests enjoyed a picnic lunch and had a chance to interact with the birds one on one.

This ability to learn more about the world’s natural processes — whether they harm or help create the wine people like to drink — remains an important part of Blankenship’s mission as a falconer. “It’s so impactful for guests at the winery,” she says. “It changes everything with how they think about nature and these birds.”

It can also affect the way they think about wine. “I like people to remember, when they open a bottle of Tanager Pinot Noir, that the Pinot security was done by two falcons,” says Crum. “I consider that to be special.”

Home Videos The WORLD of WINE – Wine News. Cheap wine, tasting notes and cooking with wine The World of Wine – May 2021 … END_OF_DOCUMENT_TOKEN_TO_BE_REPLACED

How to visit Napa Valley on a Budget. In this video Carson and I explain a few ways to enjoy Napa on the cheap. Tip and advice about how to visit Napa … END_OF_DOCUMENT_TOKEN_TO_BE_REPLACED

Home Videos Get To Know Argentina Wine | Wine Folly If you love Malbec, Argentina is your ultimate wine region. But that’s not … END_OF_DOCUMENT_TOKEN_TO_BE_REPLACED