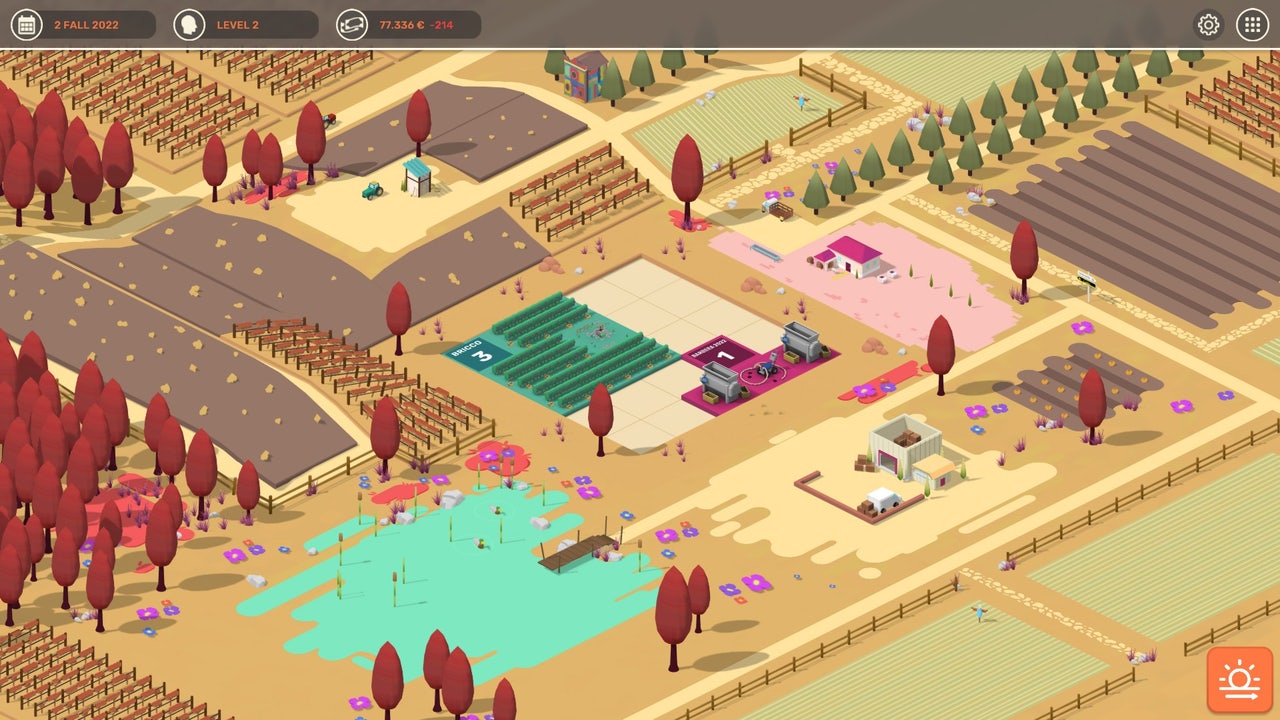 When you first fire up Hundred Days, one of the first people you meet is the head of the harvest. He’s not the chief winemaker, but he may as well be — because he bluntly and immediately reminds you that you know absolutely nothing about wine, and it’ll probably be shit.

Hundred Days – Winemaking Simulator is a new indie game from Broken Arms Games, out now on Steam, Epic Games Store and GOG. It’s the story of Emma, who escapes the exceedingly grey monotony of office life when she receives a letter from an oenologist.

Bepe, or the Old Man, is coming to the end of his days. But rather than giving over his vineyards to established winemakers, Bepe wants to put a complete novice in charge. “While we need to treasure our tradition, we also need to make room for innovative solutions, newcomers to fill our ranks,” he opines in the game’s opening.

So that opens the door for one of the nicest pitches in video games: A chill, low-key simulator about making wine.

The actual act of playing Hundred Days is best described as turn-based Tetris. As you progress through the days and seasons of the year — the game gives you five days per season, totalling 20 days a ‘year’ — you’ll play cards, each of which occupy a certain amount of spaces on the board.

The more money you make (or borrow), the more you’ll be able to expand your grid each turn. But in the first few hours, and as you begin to navigate the requirements of your first few grapes, you don’t really need that much space. Hundred Days is a meditative exercise in being methodical: making sure your vines are treated before the winter comes, making sure you follow your arsehole harvester’s suggestions on sweetness, tannin and acidity, and making sure you don’t fall the trap of trying to shovel gigalitres of swill to ALDI.

That last part isn’t a joke, either. The game pretends to give you the choice of deciding whether you want to produce lower quality wine at bulk, or smaller batches of higher quality wine. But you’re on a random vineyard in what appears to be Italy. There is no room for $4 Sauvignon blancs; make the best possible wine you can, otherwise you will be drowning in debt.

You start out with a single vineyard with barbera grapes, and Hundred Days slowly introduces you to the winemaking process. After acquiring the land, the area are cleared, watered, attached to poles, terraced and plowed (if you’ve unlocked all of those things). Then it’s time to plant the actual vines, starting the cycle of suckering, whereby unnecessary shoots are cut from the vines.

Trimming cuts off extra parts of the vines that could produce grapes, which ensures more flavour is concentrated into the grapes that remain. Crop thinning follows a similar philosophy, reducing the overall size of the crop to intensify the flavour of what’s left. The actual harvest is the process of picking the grapes and then turning it into wine, which generally involves crushing the grapes, fermenting the grapes, then pressing the grapes to produce wine for bottling. You can also postpone the bottling process in lieu of a second fermentation, known as malolactic fermentation, which reduces the acidity of the wine. It’s at this point you can also age the wine in certain barrels, although whether that’s recommended really depends on what grapes you’re working with, what wine you’re trying to make and what characteristics you want to highlight at the end. (It’s worth noting that white wine and red wine have different processes, although in Hundred Days it’s mostly the same except for a change in when the grapes are pressed and fermented.)

Hundred Days replicates this entire process through its card-based system. You play the fermentation card on your plot of land, and a couple of turns later you’ll be able to start the next process. As you play through, some cards will take fewer turns to complete depending on what upgrades you unlock. Buying an old tractor helps speed up the harvest, finishing it in two turns instead of three. But that tractor will eventually break down. So you’ll have to spend time and money repairing it, which involves playing another card on your grid-based board.

Some work can’t be done when it’s snowing or raining, for instance. And that’s a large part of what the early phase of Hundred Days really is: discovering the methodical rhythm as to when and how you should make wine, learning what periods are best to schedule your vine treatments, identifying which upgrades and maintenance can be delayed into the future, and leaving yourself room for the inevitable heatwave or crop disease.

There’s three modes to the game: a story mode, challenge mode and an endless mode, but it’s the story that you’re best thrown into. It’s here you’re introduced to a cast of characters: a nosy neighbour who adores you and effectively does guerrilla marketing on your behalf; a shadowy syndicate couple who are wary of a newcomer to the region; a rugged journalist wanting to tell the stories of winemakers in the region; local wine bars run by others who moved into the area, appreciative for the efforts of the player as another outsider; and your trusty workers, who range from the very chill tutorial farmhand to a vineyard specialist that looks and talks like he has an Instagram account for wellness pics and motivational quotes.

Some of the writing is surprisingly funny at times, and there’s a little bit of fourth wall breaking, but it’s mostly perfunctionary. You’ll get a title card after hitting the 100 days mark (or 5 in-game years), and the opening loading screen has a nice line about the difference between courage and stupidity. Hundred Days actually has a really interesting story underneath it all, with the developer saying they might buy back their father’s vineyard if Hundred Days takes off.

Apparently the entire idea for Hundred Days came from a small piece of advice given to the developers by someone else in the industry: “Note your background.” Broken Arms Games’ lead designer Yves Hohler grew up with wine, so that’s what the studio made.

There’s a lot to like about the idea of Hundred Days, but the actual act of playing it has its fair share of frustrations. I ran into a quirk once where the game wouldn’t properly trigger the fermentation process for my wines: the cards were played on the board, but something bugged out that caused them to not spawn the next stage of winemaking, so I found myself literally without any wine to sell.

That’s just an annoying bug, mind you. The bigger quirk is the lack of proper guidance about how your vineyard should expand once you get access to multiple grapes. Your trusty advisors don’t openly tell you that aging is the best upgrade you can buy early on, because aging can maximise the body of the wine you sell, which can transform your starting Barbera from a 70/100 wine to the high 80s or even 90’s. That’s not a small deal either: it’s the difference between making a thousand or two a turn versus several thousand, which then directly affects how much money the bank will loan you, and just how quickly you can spin up new upgrades and new sales.

The upgrades, too, can be a bit clumsy. It costs money to unlock everything — new tractors, new grapes to plant on vines, new pruning techniques, barrels — but you actually have to pay twice for those upgrades. The problem is that Hundred Days isn’t clear about the full cost of an upgrade until you commit. For instance, if I want to upgrade my warehouse with a shop to expand my sales, I don’t just have to pay 10,000 euros for the upgrade: I also have to pay 20,000 euros to build the shop itself.

All your buildings have their own Tetris grid, too, so if you don’t have room there you either have to sell something or upgrade the building to the next level. That takes more time and costs more money, and the upgrade has to be played on your main Tetris plot of land — triggering another set of decisions about what to sacrifice over the coming days. You can plan ahead for all of this, and after a few restarts you get into the habit of knowing what times are best to make certain moves. I just wish Hundred Days eased you into that process a little bit better. The fun of management sims like this is having the data in front of you and being able to make the mental calculations upfront.

Visually, however, Hundred Days is a delight to look at. There’s a lovely, gentle soundtrack underpinning your wine conglomerate, and the animations and transitions of life on the yard are well done. The story seems to peter out after those first 5 in-game years, with the game’s systems carrying on as you expand and gather even more and more profits. Maybe there’s a final story to be reached once every upgrade is unlocked, or once you’ve finally gotten a proper 100/100 wine, but after 10 hours I certainly hadn’t reached that point.

I did, however, start to sell some properly decent wines like the Barbera above. I’d named it Chardon, a shortening of Chardonnay, because I’d gotten to that stage in the simulator where you start to play on auto-pilot. When you reach that stage, the different challenges and endless modes are there for more replayability, although even in my longest runs there was still plenty of crops to acquire, new grapes to unlock and new marketing campaigns to run.

It’s an experience that, unsurprisingly, was greatly enjoyed with an actual glass of wine. Not because of the wine itself, and not because of Hundred Days‘ portrayal of the winemaking process, but because some games are best enjoyed slowly, almost serenely. Hundred Days makes for a fun second-screen experience if that’s your flavour, and the minimum PC requirements are low enough that just about everyone (new M1 Macbook owners included) should have no problems running the game. The real problem: can you make a wine good enough before diseases strike and you have to uproot the entire vineyard? If not, I hope you’ve got some cash stored in the bank. The business of wine, even on a small scale, is a costly business.

Home Videos The WORLD of WINE – Wine News. Cheap wine, tasting notes and cooking with wine The World of Wine – May 2021 … END_OF_DOCUMENT_TOKEN_TO_BE_REPLACED

How to visit Napa Valley on a Budget. In this video Carson and I explain a few ways to enjoy Napa on the cheap. Tip and advice about how to visit Napa … END_OF_DOCUMENT_TOKEN_TO_BE_REPLACED

Home Videos Get To Know Argentina Wine | Wine Folly If you love Malbec, Argentina is your ultimate wine region. But that’s not … END_OF_DOCUMENT_TOKEN_TO_BE_REPLACED