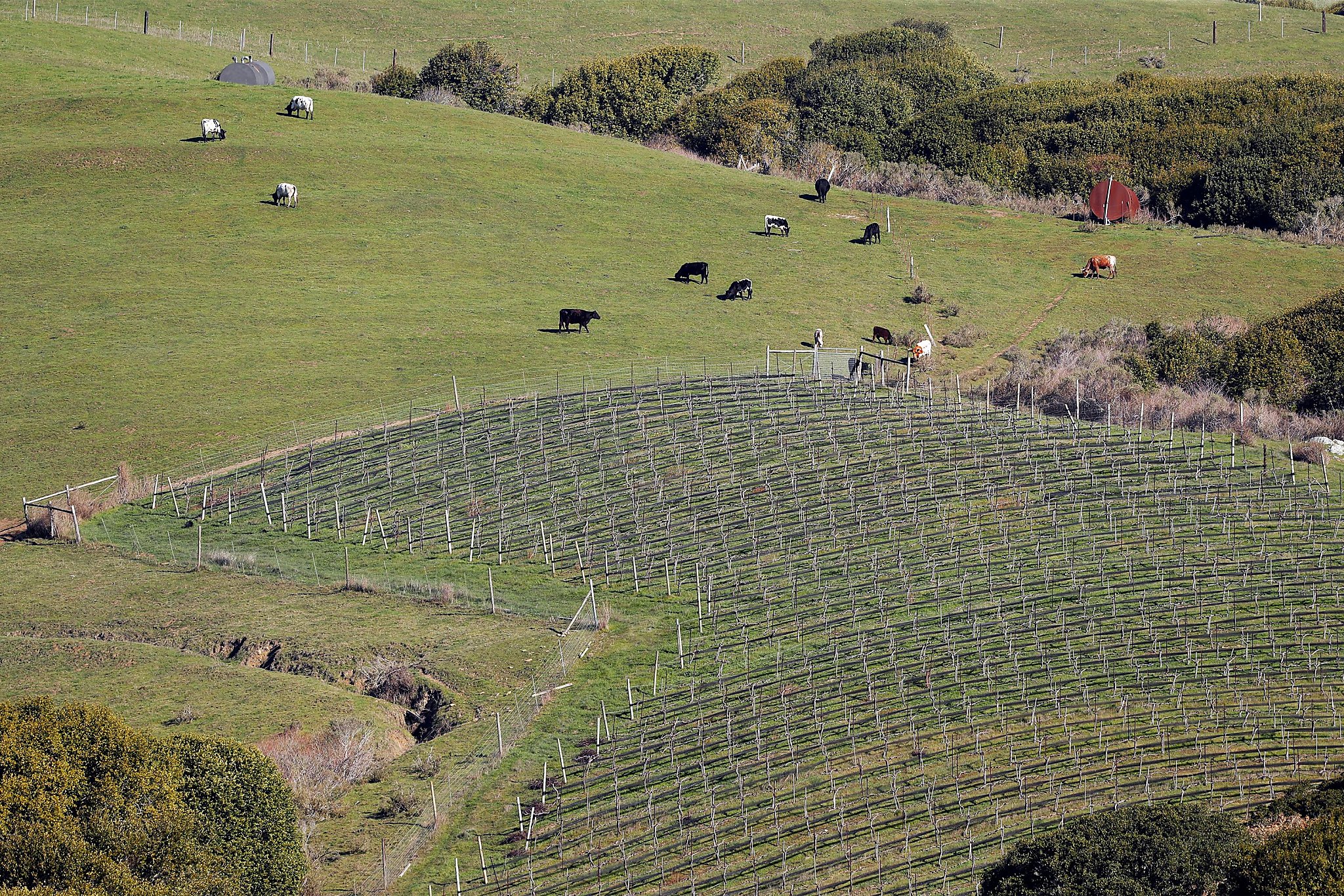 There shouldn’t be a vineyard in Point Reyes Station, at least by conventional measurements. The climate out here ought to be too extreme for wine grapes, with chilly temperatures and whipping winds. These stretches of western Marin County are dairy country, not Wine Country. It’s cows, not Cabernet, that dot the rolling green pastures.

Yet a vineyard does exist here, and has for 30 years. Along Highway 1, peeking out beyond the southernmost tip of Tomales Bay, is Point Reyes Vineyards, where sloping rows of Champagne grapes overlook a homey, Tuscan-farmhouse-style tasting room and a small inn.

Now, this improbable vineyard is on the market. On Feb. 25, the property’s 83 acres of land, 7 acres of grapevines, tasting room, winery and four-bedroom house will be offered in a live and online auction through Harcourt. The bidding will start at $4.2 million, though owner Steve Doughty is hoping for $6 million.

He’ll need to find a buyer who’s willing to take on coastal Marin viticulture. It’s a daunting enterprise: The tasting room and winery would need complicated permitting and renovations, not to mention the fact that Point Reyes wine doesn’t exactly have the cachet of Napa or Sonoma.

But Doughty is betting on one unexpected element making his property more appealing: the weather. As warming temperatures, erratic weather and wildfires threaten winegrowing in California’s inland regions, he’s banking on some of those vintners fleeing toward the chilly coasts. However dubious — and however self-serving the theory is for a man who is eager to retire — it’s not an impossible notion, that a place like Point Reyes might be one of California wine’s last stands against climate change.

When Doughty says “we are geared up for global warming,” he’s obliquely referring to the fact that climate change stands to transform many of California’s wine regions, especially those that are not on the coast. According to some estimates, for example, certain areas of Napa Valley may move into a temperature band that is too hot for Cabernet Sauvignon, its star grape variety, to be grown at a high quality within the next few decades.

It’s an apples-and-oranges comparison to pit Napa Cabernet, America’s most prestigious wine, against the Champagne-style grapes that Doughty grows by Tomales Bay. Yet the basic idea that high-quality grapegrowing will migrate to some extent from warmer inland regions to cooler coastal regions is sound. In fact, it’s already happened: Coastal Sonoma County, especially the ridges near Fort Ross, were long assumed to be too cold for high-quality winegrowing. Now, they are considered among California’s best sites for grapes like Pinot Noir and Chardonnay.

Climate change alone doesn’t account for the wildfires that have ravaged California wine regions in recent years, but experts agree that it has played an important role. Hotter weather and lower precipitation, for example, have led to extended periods of high fire danger.

Whether established vintners are ready to invest millions of dollars into that idea is another question.

Two high-profile Napa Valley vintners who saw their wineries damaged in 2020’s Glass Fire, Doughty says, have expressed interest in his property. One of them, Dario Sattui, confirms that he was interested but says it wasn’t to plant a vineyard. He wants a dairy farm. “It’s been a dream of mine to make triple cream cheese and good butter,” says Sattui, who owns Castello di Amorosa in Calistoga. He dismissed the idea that Point Reyes would become a wine mecca anytime soon. (For now, Sattui is investing in an existing dairy, Valley Ford Creamery.)

It’s the coolness of Marin that makes it so appealing for sparkling wine, says Schramsberg winemaker Hugh Davies. It can result in beautiful Pinot Noir that retains its crisp acidity while expressing full flavors. But it comes with a price. “It’s expensive to farm out there,” he says. “The cold air, the fog, the sea breeze — the grapes are very late ripening, and the yields are really low.”

Davies is skeptical of Doughty’s prediction that climate change could force a mass exodus. “It may change what grapes we grow in a place like Napa,” he says. “It’s not going to change overnight. The potential for it to be a little milder out towards the coast, supporting some of the heartier red wine varietals into the future — maybe. I still think it’s extreme.”

He never intended to get into the wine business. The 79-year-old is a private investigator by profession; he ended up in Point Reyes Station because in 1987 he married into a long lineage of west Marin dairy farmers. He and his late wife, Sharon Mendoza Doughty, ran a dairy on the 765-acre parcel that she had purchased during the decade prior.

In the late 1980s, Doughty heard that the Point Reyes National Seashore, which owns neighboring land, might be interested in buying more. “They were offering $2,500 an acre for grassland, or $25,000 an acre for grape land,” he says. So to collect the higher sum, he decided to make his land into grape land. “The plan was to sell to the park and then move to Hawaii.”

He consulted a friend, who said his property was too cold to support anything other than the grapes used in France’s frigid Champagne region — Pinot Noir, Pinot Meunier and Chardonnay. He planted them with intention of making Champagne-method sparkling wine, a time- and labor-intensive process.

Whereas sparkling wine grapes in Napa and Sonoma are typically harvested in August, the Point Reyes Vineyards grapes often aren’t ready until November. Doughty ages his wines in bottle for about a decade before selling them, because he likes the way this type of extended-tirage sparkling wine tastes.

The Hawaii plan did not materialize. The National Seashore never came calling, and Doughty found himself, unintentionally, with a business on his hands.

In 1997, he bought an adjacent 10-acre parcel that had once belonged to Alfred Bianchi, a well-known Marin dairyman (and uncle-in-law to Nancy Pelosi), so that they could open the tasting room and the three-room inn. Apart from a few local restaurants, that tasting room remains the main sales channel for Doughty’s sparkling wines, plus the 2,000 annual cases of wine he and longtime employee Federico Garcia make from purchased fruit.

It’s not your typical tasting room. The wines on offer here are often 20 years or older, and many convey a musty, austere quality. The sparkling wines in particular have the customary nutty, yeasty flavors that accompany age, in some cases recalling mushrooms and soy. Many of the visitors are oyster tourists, bringing a haul from nearby Tomales Bay Oyster Co. to shuck in the tasting room’s courtyard while drinking bottles of sparkling wine.

And unlike the sleek tasting rooms of neighboring counties, Point Reyes Vineyards presents as a little disheveled. In front of a wall of merchandise, two vintage bicycles stand with price tags attached. “I’ve been telling people the wine industry is so bad that we’re in the used bicycle business,” he jokes. An old Detroit model could be yours for $500.

The place needs a facelift, which may be one reason why Point Reyes Vineyards has been on the market for over a year now, says its realtor Michael Milano. “If someone’s going to spend $6 million, they’re expecting not to lift a finger,” he says. “Most people in that price point aren’t trying to buy projects. They want a trophy showpiece.”

That $6 million asking price is a reduction from the original $8 million, and Doughty will offer the buyer the chance to buy all of the unsold wine inventory, which he values at $2 million, and to take over his lease on a Cabernet Sauvignon vineyard in San Rafael, planted in the 1960s.

By some standards, it might seem like a deal. Milano and his partner George De Salvo recently sold a nearby 3,000-square-foot home on just 6.5 acres for $3.3 million. In Petaluma, just across the county line, a ranch of this size would easily command $5 million or more, the realtors say. Good Sonoma County vineyard land can generate $50,000 or more per acre. But then, this is not Sonoma County.

Doughty is hopeful that the auction will work as a final attempt to generate buzz. “I think we’ve done pretty well for a no-name winery started by some people who didn’t know what they were doing,” he says. “But I’m through making wine.” Like many California winemakers, he lost his entire 2020 crop to wildfire smoke, so 2019 will be the final vintage of Point Reyes Vineyards wines. He’s given up on the bed-and-breakfast business, which has dried up as Airbnb has proliferated in the area.

Home Videos The WORLD of WINE – Wine News. Cheap wine, tasting notes and cooking with wine The World of Wine – May 2021 … END_OF_DOCUMENT_TOKEN_TO_BE_REPLACED

How to visit Napa Valley on a Budget. In this video Carson and I explain a few ways to enjoy Napa on the cheap. Tip and advice about how to visit Napa … END_OF_DOCUMENT_TOKEN_TO_BE_REPLACED

Home Videos Get To Know Argentina Wine | Wine Folly If you love Malbec, Argentina is your ultimate wine region. But that’s not … END_OF_DOCUMENT_TOKEN_TO_BE_REPLACED