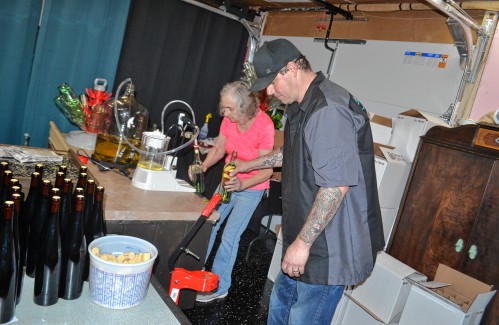 A black-and-white image of the Contoocook River rushing over Noone Falls adorns the label for each bottle Cabana Falls Winery produces.

For Alyson and Carroll Lefebvre, proprietors of the new Peterborough winery, it just feels right. “Cabana Falls” is an ode to their family home on Cabana Drive, where their collection of wine started as a hobby project for their own consumption and the landmark waterfall just across Route 202.

It’s been a little over a year and a half since the Lefebvres made their first batch, and starting Friday, their wine will be available for purchase, as the husband and wife realize their longtime dream of sharing their creations with wine connoisseurs across the Monadnock region and beyond. Cabana Falls Winery will officially open its wine tasting and retail location in the Strand Building at 174 Concord St., Suites 360-365, at 1 p.m. on Friday.

The wine-making began in small batches, six gallons at a time, which equates to anywhere from 25 to 30 bottles. While they may be producing their wine for the masses now, the process remains the same, they said.

“We still want to do small batches because we like the control,” Carroll said.

The first foray into homemade wine for the Lefebvres didn’t go as planned. The batch was ready for bottling, but instead of 28 bottles ready for drinking, the entire six gallons spread across their basement floor due to a cracked carboy container, leaving a trail of ruined carpet in its wake.

“We were so excited for that first batch,” Alyson said of the December 2019 debacle. “I said ‘I’m never doing this again.’ ” But that sentiment didn’t last long, as the couple went out the very next day to replace the carboy and secure all the ingredients to redo the process.

Fast-forward a year and a half, and not only are the Lefebvres still fermenting wine in their home garage, but they are now licensed to sell wine out of their newly leased space.

Ten days prior to the storefront opening, the Lefebvres were hard at work in their garage – bottling the collection of batches that had gone through the fermenting and flavoring process, putting in corks, attaching labels – getting ready to stock the racks in the Strand Building space for the opening. The goal was to have north of 300 bottles ready for opening day.

There were flavors like Just Peachy, Raspberry Chocolate, and Razzy Pitaya flowing into the bottles, while others will also be available for purchase during opening weekend. The plan is to have those three, as well as Wild Cherry-ade, Fall Harvest, Crisp White and Blush, both dry wines, available all year round. Ones like Caribbean, which was also bottled that Friday night, Fruit Salad, Fairway, Beachy Sands and Tropical Lemonade are slotted as summer varieties. Coming this month, flavors like Juicy Blackberry, Granny’s Pie, Red Raspberry Burst, Blemon Berry, Berry Crazy and Seedless Watermelon will make their debuts. As of now, they have 19 different recipes.

“Our wines are not your typical wines,” Carroll said.

“Everything is fruity and sweet,” Alyson added.

They use a grade concentrate to begin the process, which can take anywhere from four to five weeks from start to finish. The concentrate is combined with filtered water, yeast and bentonite. It takes two to three weeks for it to start turning into alcohol before the flavoring is added, which is a very controlled step.

“You have to be careful of your sugar content,” Carroll said. “You don’t want to introduce a lot of sugar at that stage.”

Carroll’s mom Coreen, who is the company bottler, made carboy coozies to help with the fermenting, as it keeps out sunlight and keeps in the heat.

While it began as a hobby to satisfy their love of wine, the Lefebvres got feedback from friends that had them thinking bigger picture.

“People would come over and try it and say ‘this wine is amazing, you need to make it and sell it,’ ” Alyson said. They made just one batch a month for a while, but once the licensing got ironed out, it was full steam ahead on production.

“We just wanted to sell it to everybody,” Alyson said. “This is what we want our jobs to be.”

They made 19 batches initially and plan to expand even more, as they love experimenting with flavors, Alyson said.

“We eventually plan to do 30 batches a month,” she said.

Carroll said that the wine will last about three years unopened, but doesn’t expect too many folks will be holding on to it that long.

“Once you get it, you’re going to drink it,” he said. Alyson said serving it chilled is their preference.

As things moved more toward the idea of a business, Alyson left her job at NH Ball Bearings in December to focus on getting the necessary licensing paperwork in order to make it happen.

“If we kept things the way they were going, it could have been well over a year until we started selling wine,” Alyson said.

Their licensing allows for wholesale distribution, but that process has only just began as the main concentration has been producing enough to have at the store.

As an aside, the Lefebvres are set to debut Cocktail Creations on Facebook, using their wines to make drinks behind their home bar.

Home Videos The WORLD of WINE – Wine News. Cheap wine, tasting notes and cooking with wine The World of Wine – May 2021 … END_OF_DOCUMENT_TOKEN_TO_BE_REPLACED

How to visit Napa Valley on a Budget. In this video Carson and I explain a few ways to enjoy Napa on the cheap. Tip and advice about how to visit Napa … END_OF_DOCUMENT_TOKEN_TO_BE_REPLACED

Home Videos Get To Know Argentina Wine | Wine Folly If you love Malbec, Argentina is your ultimate wine region. But that’s not … END_OF_DOCUMENT_TOKEN_TO_BE_REPLACED