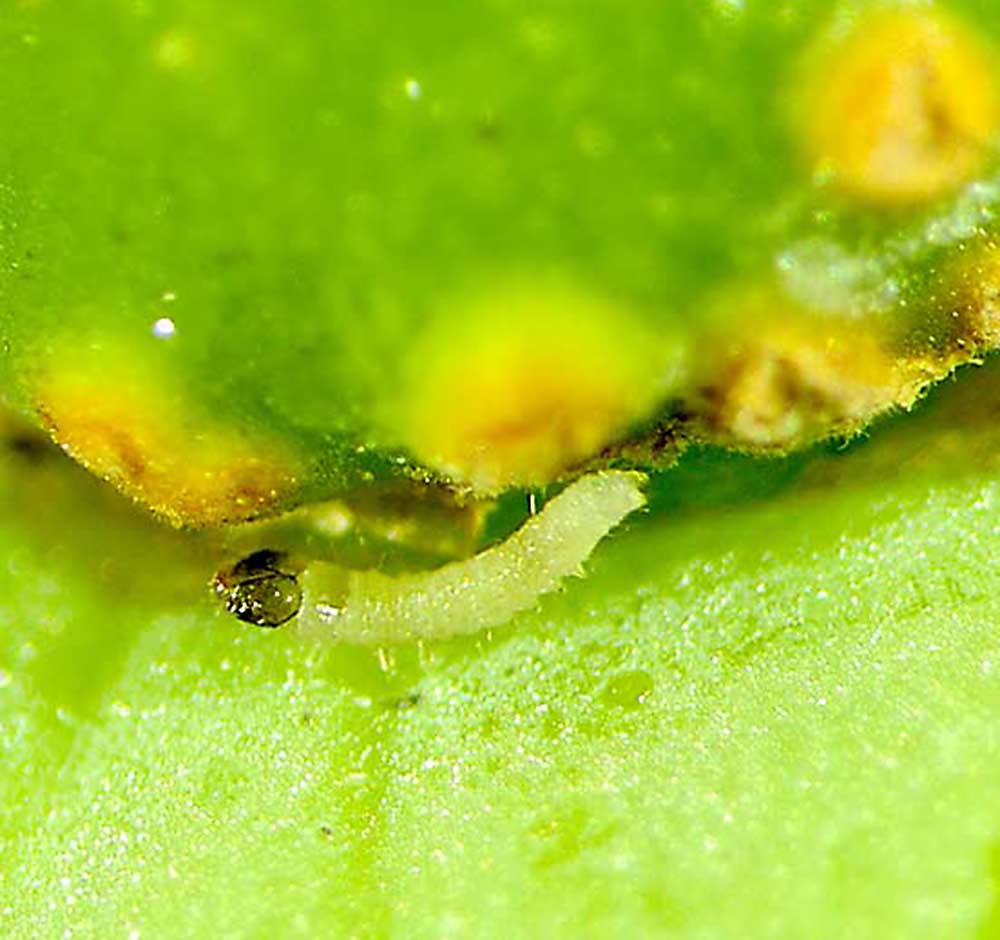 Grapes are grown throughout Pennsylvania, but there are two main commercial growing regions with very different vineyards and pest pressures to manage.

In Northwest Pennsylvania, thousands of acres of juice grapes, mostly Concords, cluster around Lake Erie, which provides some protection from extreme temperatures. Juice grapes in that region (which also includes wine varieties) are generally more tolerant to insects and diseases.

Both regions have to deal with a variety of vineyard pests, however, that require consistent management.

The grape and enology team discussed pest management in Pennsylvania vineyards during a July webinar. They focused on the mid- to late-season period, which begins after bloom, said Andy Muza, an extension educator in Erie County.

Muza said grape berry moth, grape leafhopper, and Japanese beetle are the three most widespread insect pests in Pennsylvania vineyards. The latter two are leaf eaters, but grape berry moth feeds directly on grape berries, making it the most economically damaging of the three.

Grape berry moth is a growing problem in Northwest Pennsylvania’s Concord vineyards, and likely throughout the state. Climate change might be playing a role. In the past, there were two or three generations of grape berry moth per year. As temperatures gradually rise and seasons start earlier, three or four generations per year are now common.

Woods containing wild grapevines are high-risk zones for grape berry moth, which is a natural pest of wild grapes. If the wild vines grow near a commercial vineyard, growers should consider removing them. Grape berry moths overwinter as pupae. Moths emerge in spring and lay their eggs on the developing berries of wild grapes. The next generation lays eggs on nearby cultivated grapes. The larvae that hatch from those eggs feed internally in grape berries — where they are protected from insecticides, Muza said.

Flor Acevedo, assistant professor of entomology, described some other insect pests grape growers need to watch out for, including the invasive brown marmorated stink bug, first detected in Pennsylvania in 1998; the fruit flies spotted wing drosophila and Drosophila melanogaster; and the spotted lanternfly, a new invasive species that has spread to 26 counties in Pennsylvania and at least five neighboring states and is known to feed on vineyards in massive numbers.

Not all insect threats are invasive, though. Acevedo discussed grape phylloxera, an aphid-like insect that takes two forms in the Eastern U.S.: one that feeds on leaves, the other on roots. The root-feeder is the more aggressive of the two. Phylloxera has a high reproductive capacity and is able to kill susceptible vines over a few years. One of the best ways to combat the native insect is through resistant rootstocks.

On the disease side, Southeast Pennsylvania growers have had a tough time lately with downy mildew. Warm, wet weather is optimum for the disease, and the region has received a lot more rainfall than average in the last few years, said Bryan Hed, a Penn State research technologist.

During wet, rainy summers, Hed cautioned growers to scout their vineyards for downy mildew’s distinctive white sporulation on the undersides of leaves. He also emphasized the importance of keeping vineyard canopies under control. Dense canopies contribute to excessive shading, which can lead to greater disease development. He recommended removing leaves in the fruit zone, whether by hand or machine.

Powdery mildew is not as beholden to wet weather as is downy mildew. Once the primary infection of leaves, shoots and clusters begins, the disease can take off without need for more rainfall. In addition, powdery mildew infections can produce necrotic areas on fruit that later become points of ingress for bunch rots, he said.

In general, wine varieties are more susceptible to powdery mildew than are juice varieties. Hed said synthetic fungicides are key to good powdery mildew control, starting early in the season. And as with downy mildew, controlling the density and thickness of vineyard canopies is crucial.

Home Videos The WORLD of WINE – Wine News. Cheap wine, tasting notes and cooking with wine The World of Wine – May 2021 … END_OF_DOCUMENT_TOKEN_TO_BE_REPLACED

How to visit Napa Valley on a Budget. In this video Carson and I explain a few ways to enjoy Napa on the cheap. Tip and advice about how to visit Napa … END_OF_DOCUMENT_TOKEN_TO_BE_REPLACED

Home Videos Get To Know Argentina Wine | Wine Folly If you love Malbec, Argentina is your ultimate wine region. But that’s not … END_OF_DOCUMENT_TOKEN_TO_BE_REPLACED