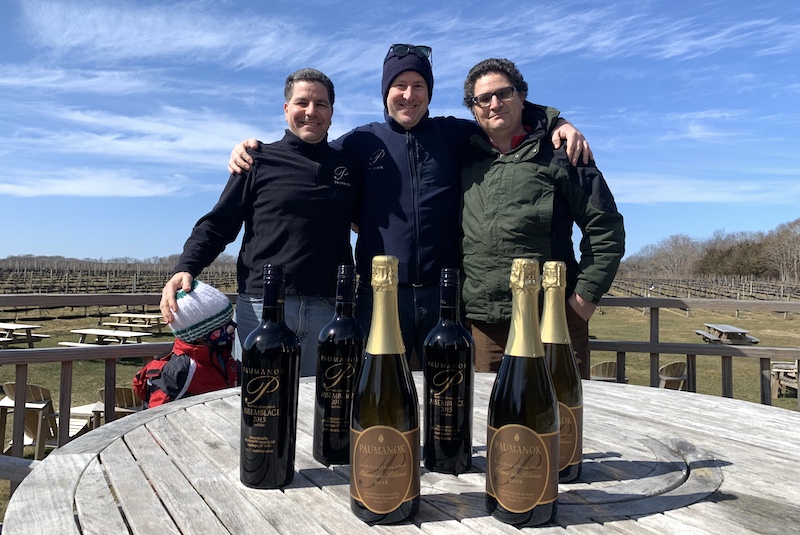 The North Fork came away from the 2021 New York Wine Classic with the top two prizes.

Paumanok Vineyards of Aquebogue was named Winery of the Year, the third time it has earned that distinction.

Pindar and Paumanok are among the oldest vineyards on the North Fork, both dating back to the early 1980s. Both are owned and operated by their founding families.

Paumanok, a 127-acre estate vineyard and winery on Main Road in Aquebogue was founded by Charles and Ursula Massoud. Today, their three sons, Salim, Kareem and Nabeel, run the operation.

“My father always said winemaking is less of an art and more of a partnership with Mother Nature — and she’s the senior partner,” Kareem Massoud said. “So we’re really blessed. When we get a good vintage, the whole team becomes custodians of the gift from Mother Nature,” he said.

“We’re extremely proud of our sons,” Ursula Massoud said yesterday during the New York Wine and Grape Foundation’s virtual awards ceremony, which she joined with her husband from their winter home in Naples, Florida. “I want to thank them and their families for supporting them and working together,” she said.

“This is really an expression of what is happening in New York,” Charles Massoud said. “Our wines are more Old World,” he said. “Congratulations to all the winners.”

Paumanok was named Winery of the Year in the competition in 2004 and 2015.

The 500-acre Pindar Vineyards, founded by the late Dr. Herodotus “Dan” Damianos, is owned and operated by his his family, Pindar Damianos, Alexander Damianos and Alethea Damianos-Conroy. Winemaker Erick Bilka and vineyard manager Bill Ackerman accepted the award with members of the Damianos family. The vineyard has 17 varietals planted and makes 22 different wines Bilka said.

Judging for this year’s competition was conducted over a four-month period, from Nov. 1 through Feb. 15. There were 607 entries from 96 wineries across the state.

Other Long Island vineyards that earned gold medals were:

Lieb Cellars for its 2019 Estate Chardonnay and its 2018 Estate Sparkling Pinot Blanc;

Suhru Wines for its 2019 Pinot Grigio;

Support local journalism.
Now more than ever, the survival of quality local journalism depends on your support. Our community faces unprecedented economic disruption, and the future of many small businesses are under threat, including our own. It takes time and resources to provide this service. We are a small family-owned operation, and we will do everything in our power to keep it going. But today more than ever before, we will depend on your support to continue. Support RiverheadLOCAL today. You rely on us to stay informed and we depend on you to make our work possible.

Home Videos The WORLD of WINE – Wine News. Cheap wine, tasting notes and cooking with wine The World of Wine – May 2021 … END_OF_DOCUMENT_TOKEN_TO_BE_REPLACED

How to visit Napa Valley on a Budget. In this video Carson and I explain a few ways to enjoy Napa on the cheap. Tip and advice about how to visit Napa … END_OF_DOCUMENT_TOKEN_TO_BE_REPLACED

Home Videos Get To Know Argentina Wine | Wine Folly If you love Malbec, Argentina is your ultimate wine region. But that’s not … END_OF_DOCUMENT_TOKEN_TO_BE_REPLACED