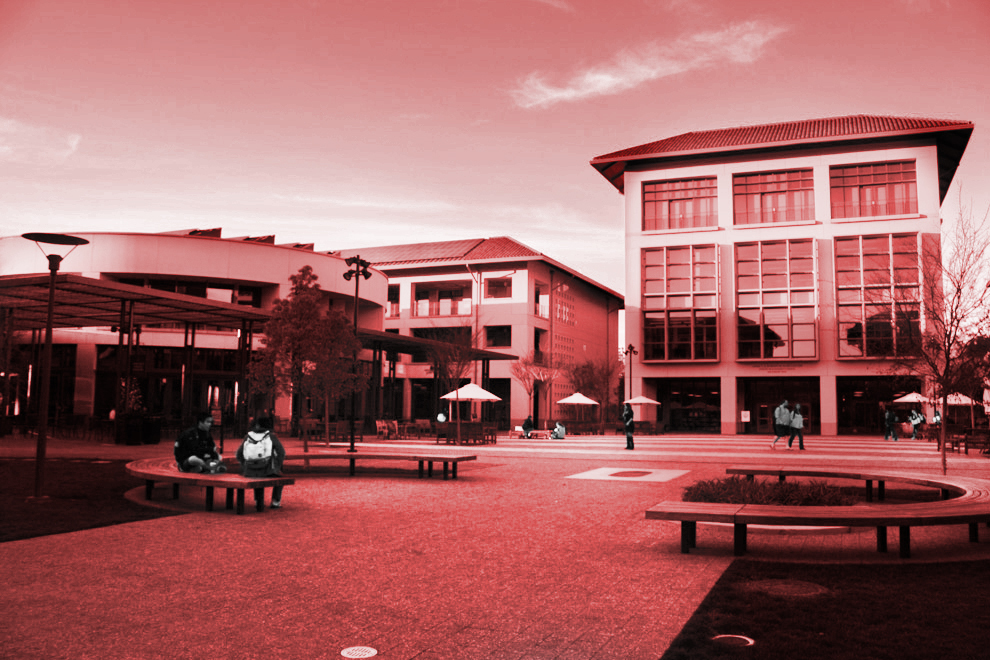 Some students have been given first-name pseudonyms to improve readability. Their identities, while known by The Daily, are being withheld in this article due to fear of retaliation for speaking out.

Students in the Graduate School of Business (GSB) have repeatedly disregarded University and regional rules aimed at limiting the spread of the virus. And these excursions have had consequences: Though cases on Stanford’s campus have remained relatively low, students have reported falling sick from the GSB gatherings.

Of course, unauthorized gatherings are not limited to students at the GSB. But the frequency and magnitude of GSB gatherings are an outlier at Stanford compared to those at the undergraduate level or Stanford’s other graduate schools.

According to students, this comes down to the school’s culture: Stanford’s COVID restrictions are antithetical to the networking experience GSB students believed they signed up for when enrolling.

“Pursuing an MBA is wildly different than other types of graduate programs,” said Sydney, a GSB student, choosing their words carefully. “And with that difference comes different values, different priorities, different ways of navigating the experience.”

Stanford has declined to provide concrete numbers about how many cases were attributed to graduate students. Upon students’ return in January, new on-campus student cases spiked to 43, over four times the previous high. The next day, Stanford backtracked on months-reaffirmed plans to bring the rest of the frosh and sophomore classes to campus.

Though Stanford declined to comment on how many of the new cases came from the GSB, multiple stemmed from a large GSB student gathering over the break, Dean Jonathan Levin wrote in an email to GSB students obtained by The Daily.

Though the behavior occurred off campus and out of term, “at the Stanford GSB our expectations extend beyond these boundaries — we believe in service to the greater good at all times,” Levin wrote. “This is a public health crisis, and in California, an acute period.”

According to multiple GSB students, Levin’s email referred specifically to a New Year’s Eve party in Los Angeles County. The party took place at a rented house that was described by many as a mansion, with reports of anywhere from 50 to 75 GSB students attending, the students said.

“Everyone has heard the same story,” Blake, a GSB student, said. “Nobody is denying the story.”

Indeed, the event was acknowledged in Slack channels public to GSB students, with some students expressing disappointment that their classmates would take part in such a high risk activity.

The New Year’s Eve party took place when Los Angeles County was widely considered the epicenter of COVID-19 in the United States. During the week of Dec. 27, Los Angeles County averaged 183 COVID-19 deaths and 13,500 new coronavirus infections per day. At the time, all public and private gatherings of more than one household were expressly prohibited by regional and state stay at home orders, except for outdoor, faith-based services. Failure to comply with the order constituted a misdemeanor crime.

“The shock among the student body is that there was a large party in Los Angeles, in a rented home with 50 or more people,” Blake told The Daily. “Obviously some part of the party was COVID-positive and infected a whole host of other people. That has become this well-established truism among anybody you speak to.”

Helen, another GSB student who declined to be directly quoted for fear they could be identified, said they knew students who had contracted the virus at the party, though they declined to specify how many.

Other students interviewed by The Daily estimated at least 10-15 cases were connected to the event, based on private correspondences with attendees. The University declined to comment on case breakdowns beyond the information provided in Stanford’s COVID dashboard. When asked for comment about the Los Angeles party, the GSB provided The Daily with Levin’s email.

Student government leaders urged GSB students to think about how their actions could affect other members of the Stanford community.

“I am frustrated to hear about the rising case count at the Graduate School of Business,” wrote Kari Barclay, a Graduate Student Council co-chair and fifth-year theater and performing studies Ph.D. student, in a statement to The Daily on Jan. 10. “Gatherings on or off-campus pose a danger to us all, and just because students are young does not mean that they should take COVID-19 lightly.”

“It’s unfortunate that the campus compact has to rely on enforcement — ideally, our ethical commitments should cause us to take precautions in the first place,” Barclay added.

The New Year’s Eve party in Los Angeles was just the latest in a string of large, prohibited gatherings among business students. Forbidden activities ranged from unmasked gatherings on campus to group weekend trips to Lake Tahoe and Napa Valley to parties at off-campus houses.

Multiple students told The Daily that GSB students had more incentive to follow social distancing rules at the beginning of the fall quarter due to the prospect of in-person classes returning later in the quarter. Administrators issued students the following proposition: If students followed Stanford’s guidance and case numbers stayed low, the University would roll back restrictions on gatherings and allow in-person instruction to resume in at least some capacity.

But as the quarter progressed, students continually disregarded University rules and local health mandates by gathering on and off campus. As case numbers rose in the surrounding community, it became increasingly clear Stanford would not be able to resume in-person instruction.

Emails sent by the GSB administration to the student body throughout fall quarter paint a picture of continued student disregard for the Campus Compact and regional health guidelines.

Students told The Daily that, after the GSB announced in-person classes in the fall were no longer a possibility, many felt there was little incentive to strictly follow rules on gatherings and flouted Stanford’s policies further. On Nov. 5, a large group of students gathered outside for a wine night organized by Wine Noobs, a graduate student wine-tasting club.

While students initially lined up to collect their wine outdoors, with many students socially distancing and wearing masks, students eventually moved into their residence buildings, gathering in smaller, but still prohibited, groups. GSB staff arrived later in the evening at Jack McDonald Hall, one of the residence buildings for first-year GSB students.

According to messages obtained by The Daily, staff told residents, “We’re too late in the year for this. You’re being flippant. I’m gonna wait here until everyone leaves, I’m gonna send your name to the program, and I think they’re gonna start reviewing housing contracts.”

A later message states that a staff member “waited outside the door until everyone filed out.”

The Stanford University Department of Public Safety did not respond to The Daily’s request for comment about details of the night’s events.

The week following the gathering, Stanford reported 10 new COVID cases for the week of Nov. 9, a new weekly high at the time. Six of the 10 cases came from the GSB.

The Daily has also confirmed that some cases from the Nov. 5 Wine Noobs event reached the Compact Review Panel, Stanford’s group handling Campus Compact violations. Compact Review Panel does not disclose the results of individual cases, but The Daily has confirmed that no students were removed from housing as a result of the Nov. 5 Wine Noobs event.

Paula, an undergraduate student, said that during the fall quarter they would regularly pass by large groups of GSB students on Manzanita Field, mostly unmasked. They said that they walked through the area where the groups, which at times numbered up to 60 students, routinely gathered, in order to get to the COVID testing center at the Arrillaga Alumni Center.

When Paula returned to campus for the winter quarter, much of the behavior remained the same. From their building, they regularly see groups of students playing basketball unmasked or gathering in large groups on fields near Schwab Residential Center, a GSB residence building.

“The running joke for people living in [Casper Quad] was that if you walk near Schwab you were going to get COVID,” Paula said. “You would see some of the most ridiculous stuff.”

A sense among students that reporting on peers violates unspoken community norms, in conjunction with an attitude that students can create their own informal health guidelines, laid the groundwork for consistent infractions at the GSB.

It is worth noting that students at the GSB take positive cases seriously. Positive tests are not seen as “shameful,” but students who do test positive are expected to immediately isolate and participate in contact tracing — to not do so would mark a student to be ostracized.

But at the GSB, there is a sense that students must go beyond academics to have a valuable experience, multiple students said. More so than at Stanford’s other professional schools — the School of Medicine and Law School — students prioritize opportunities to network and meet each other.

“In the minds of the students who are doing the most wrong at the Stanford Graduate School of Business, I think there’s a sense that they are doing what they believe they came to Stanford to do,” Blake said.

“They think that, if the football players are going to play football, and if bench researchers are going to go back to their labs, then the Stanford students who came here to form networks with people of like-minded business acumen are going to resume that activity of forming those networks in person,” Blake added.

During the pandemic, some GSB students have attempted to create a bubble in which students can achieve some of their networking goals. The bubbles are not allowed by the Compact, but students have decided they follow sufficient standards of safety.

“Our calculus is that such a huge part of business school is that community, is that camaraderie,” Sydney told The Daily. “We, as a class, have established norms, more or less, within which we operate that maintain, in our mind, a degree of safety and also allow us to build that same sense of community.”

They called the Wine Noobs event — which violated the Campus Compact’s rules regarding indoor gatherings — an example of a “really creative, thoughtful and risk-conscious way in which we as GSB students have interacted.”

And when such events aren’t met with strong enough punitive measures, such violations can become commonplace. Indeed, Blake said other GSB students feel like they can “act with impunity on campus.”

While peer institutions have publicly removed students from housing for violating COVID-19 rules, Stanford has not disclosed whether it has exercised its option to do the same.

While residential staff tend to report undergraduate violations, graduate schools rely more heavily on direct peer reporting. But the GSB has a culture of students not “snitching” on their peers.

Both Blake and Helen said that most GSB students believe that talking to the press or administration would likely lead to social rejection — an unwanted outcome at a school centered around networking. Blake said they were explicitly warned against establishing a “culture of snitching.”

“There is definitely a culture of no snitching at the GSB,” Blake said. “Short of being a member of organized crime, you don’t hear that snitches get stitches. I was shocked to hear it. It sounded like we were in a street gang.”

Home Videos The WORLD of WINE – Wine News. Cheap wine, tasting notes and cooking with wine The World of Wine – May 2021 … END_OF_DOCUMENT_TOKEN_TO_BE_REPLACED

How to visit Napa Valley on a Budget. In this video Carson and I explain a few ways to enjoy Napa on the cheap. Tip and advice about how to visit Napa … END_OF_DOCUMENT_TOKEN_TO_BE_REPLACED

Home Videos Get To Know Argentina Wine | Wine Folly If you love Malbec, Argentina is your ultimate wine region. But that’s not … END_OF_DOCUMENT_TOKEN_TO_BE_REPLACED