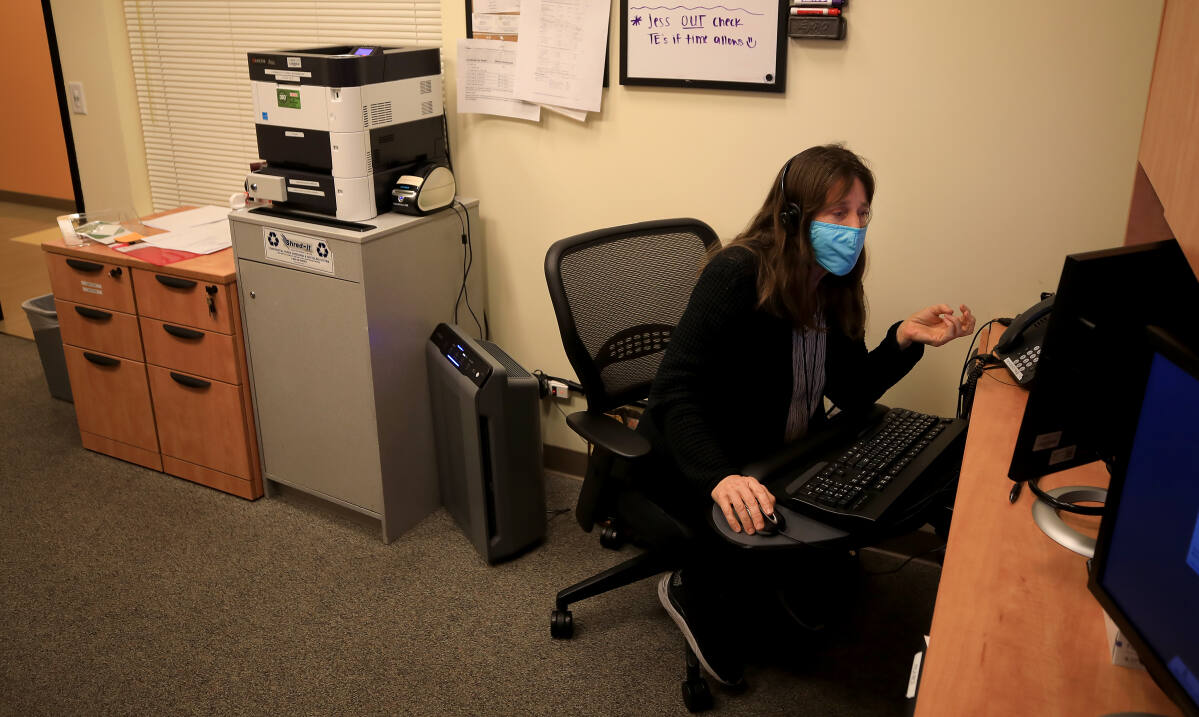 Person-Whitley said she has heard from some businesses considering hybrid work sites to reduce their office footprint, lowering rent and utility expenses.

For employers, to commit to such changes beyond the pandemic, the move has to pencil out now or in the near-term, said Robert Eyler, a Sonoma State University economist. Mixing work from home and the office “has to reduce costs, raise revenues or both for the employer to continue to do it.”

Eyler predicts it will take four years — through the end of 2023 — for the county to recover from its peak pandemic job losses, which hit nearly 35,000 a year ago, equating to more than 14% local unemployment.

As the economy regains health in 2024, businesses will face higher costs, worker shortages in some industries and an uncertain level of consumer spending, he said.

“There should be a real revival of the economy,” Eyler said. “The magnitude of that revival is a large question.”

The post-pandemic future looks brightest for construction, manufacturing, health care and professional services, he said, while brick-and-mortar retail, restaurants, hotels, hair and nail salons and fitness centers have a “deeper hole to climb out of,” he said.

“But the bottom line is clear: Working from home will be very much a part of our post-COVID economy,” said a report by the Stanford Institute for Economic Policy Research.

Steve Falk, CEO of Sonoma Media Investments and publisher of The Press Democrat, said the newspaper’s downtown Santa Rosa office was essentially vacated in March as about 150 people in the news, advertising and accounting offices converted to working from where they live.

When the office reopens, possibly by midyear, the newspaper will assess the prospects for a hybrid operation, and the accounting staff has already opted to continue working from home, Falk said.

With the lease on the Mendocino Avenue building expiring in late 2022, Falk said the newspaper is planning to downsize from 29,000 square feet to 12,000 to 15,000 square feet in a different building.

He expects about 30% of employees will work from home, another 30% opting for hybrid work and the rest returning to the office.

“I worry a little bit about the culture of the company (with limited interaction), but we’ll work it out,” Falk said.

Dave Peterson, a partner with Keegan and Coppin, a Santa Rosa real estate brokerage and management firm, dismissed the prospect of an “office market bloodbath” with “millions upon millions” of vacant square footage for offices spreading across the Bay Area, including Sonoma County.

The future will “look different” as companies adjust to hybrid operations, but “I do not believe for one second that the office is dead and won’t be returning,” Peterson said in his March market overview.

Businesses are now “starting to see the light at the end of this very dark tunnel and are in a position where they must now make decisions,” Peterson said.

Change for many sectors, not for all

Hybrid offices may shift from a wide-open floor plan to small rooms with two desks, one occupied by a worker three days a week, the other by another person two days a week, said Keith Woods, CEO of the 1,100-member North Coast Builders Exchange.

“People on the (construction) job site will continue slinging hammers,” he said.

“I don’t think we’ll ever go back to pre-COVID normal. It’s going to be a new normal,” said Joe Bartolomei, co-owner of the upscale 25-room Farmhouse Inn and Michelin-starred restaurant.

“We’ll be more careful about washing hands, keeping some sort of distance between us and other people,” he said. “I don’t know that we’ll be hugging each other.”

Bartolomei currently has 40 employees, half of his pre-pandemic staff, and plans “to run lean until I know what the future holds,” he said. “We can’t have people working remotely.”

“My hope is by midsummer we’ll be mostly out of this,” he said. “I feel like we’re headed in the right direction.”

Wineries are longing to reopen their tasting rooms, which are essential to the industry and “at the core of Sonoma County tourism,” said Michael Haney, executive director of Sonoma County Vintners, a trade group for more than 250 wineries.

Home Videos The WORLD of WINE – Wine News. Cheap wine, tasting notes and cooking with wine The World of Wine – May 2021 … END_OF_DOCUMENT_TOKEN_TO_BE_REPLACED

How to visit Napa Valley on a Budget. In this video Carson and I explain a few ways to enjoy Napa on the cheap. Tip and advice about how to visit Napa … END_OF_DOCUMENT_TOKEN_TO_BE_REPLACED

Home Videos Get To Know Argentina Wine | Wine Folly If you love Malbec, Argentina is your ultimate wine region. But that’s not … END_OF_DOCUMENT_TOKEN_TO_BE_REPLACED