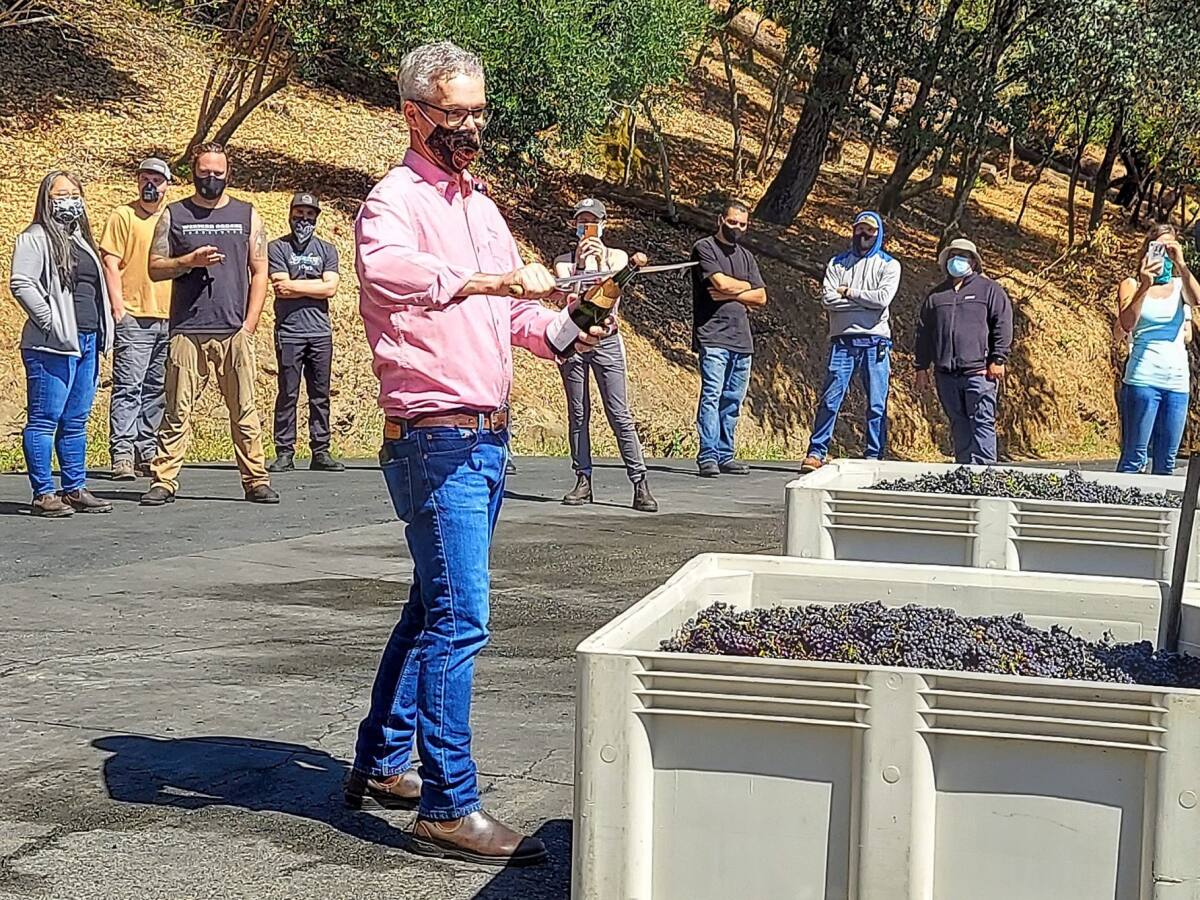 But he’s thankful for the firefighters and neighboring growers who helped the historic winery survive the Glass Fire and finish 2020 on an upward trajectory from the big revenue hole left last spring by the pandemic shutdowns.

“I don’t want to be overconfident at all, but things are looking up,” Davies said, pointing to progress toward vaccinations nationwide and the recent second reopening of winery tastings throughout California.

Schramsberg was able to pick 15% of the cabernet sauvignon grapes grown for the J. Davies Estate and Davies Vineyards brands before the edges of the Glass Fire encroached a few acres onto the Calistoga-area property in September. The structures survived, but the rest of the estate fruit wasn’t harvested because of smoke and limited heat damage.

The newly released preliminary figures for the 2020 Napa County wine grape crop point to the extent of the damage from the fires. Napa County’s total tonnage was down 38.5% from 2019, to 98,262 tons. And tonnage for cab, the county’s king grape, dropped to nearly 47,000 tons from 82,000 a year earlier, making 2020 the smallest Napa cab crop since 2008, according to the California Grape Crush Report.

Farmers who sell grapes to Schramsberg also helped lessen the financial blow of the 2020 calamities. Some moved up replant schedules to reduce the amount of fruit that would be coming into the winery, and others extended the payment timeframe. Some accepted a one-year reduction in the contracted price per ton.

“We’re finalizing grape payments now,” Davies said. “They extended payments out to allow us to get holiday revenues in, so we would not be catawampus with bank debt.”

Steve Herron, senior vice president of Exchange Bank’s commercial banking group, said his team is waiting to see what winery and grower fourth-quarter financial statements look like to figure out any financing covenants are triggered by performance.

“There will be a lot of conversations between lenders and wineries in the next six months until there is clarity on their production plans, how many grapes they intend to purchase and what their projected sales are,” he said.

Terms for crop and inventory financing are based on the previous year’s results, so it’s a challenging time for discussions with wine industry clients about renewals, Herron said.

Adam Beak, who oversees Bank of the West’s beverage group, said adjustments to credit lines for crops and winery inventory have been limited.

“Most of our clients have been successful in weathering the multiple crises affecting the industry,” he said. “Most clients produced or purchased less inventory in 2020, primarily due to fire. This means less cash out, thus less inventory financing. From an inventory perspective, the fire impact will play out over the next several years as the wines would have been released. On the positive side, if a vintner was over-inventoried, the lack of a 2020 harvest might get their operation back in balance.”

For the moment, many of the wine industry clients Charles Day of Rabo AgriFinance works with are in a good cash position and are able to tap their credit lines.

“We have heard from some growers that they have seen payments coming in from crop insurance,” Day said. “There was speculation that it would take until spring or summer to get money from the insurance companies.”

The smaller 2020 North Coast wine grape harvest because of weather and the fires is helping vintners to work through inventory that surged in with the record 2018 harvest and large crop the following year, helping with winery cash flow, Beak said.

“The issue will play out over multiple years as vintners grapple with the short 2020 vintage,” he said. “Cash flow to service debt is a separate issue, and that is impacted by the reduced on-premises channel (sales) and the crowded corporate retail channel.”

Previous economic shocks to the premium wine business reverberated for a few years after the attacks of 9/11 and the 2007–2008 global financial crisis.

“This time it’s still too early to tell, but economic and demographic factors are creating new headwinds that the industry must navigate today,” Beak said.

Those headwinds include changing tastes for up-and-coming adult beverage consumers who have been seen to be reaching for artisan spirits and imports in addition to fine wine, according to recent NielsenIQ research.

Home Videos The WORLD of WINE – Wine News. Cheap wine, tasting notes and cooking with wine The World of Wine – May 2021 … END_OF_DOCUMENT_TOKEN_TO_BE_REPLACED

How to visit Napa Valley on a Budget. In this video Carson and I explain a few ways to enjoy Napa on the cheap. Tip and advice about how to visit Napa … END_OF_DOCUMENT_TOKEN_TO_BE_REPLACED

Home Videos Get To Know Argentina Wine | Wine Folly If you love Malbec, Argentina is your ultimate wine region. But that’s not … END_OF_DOCUMENT_TOKEN_TO_BE_REPLACED