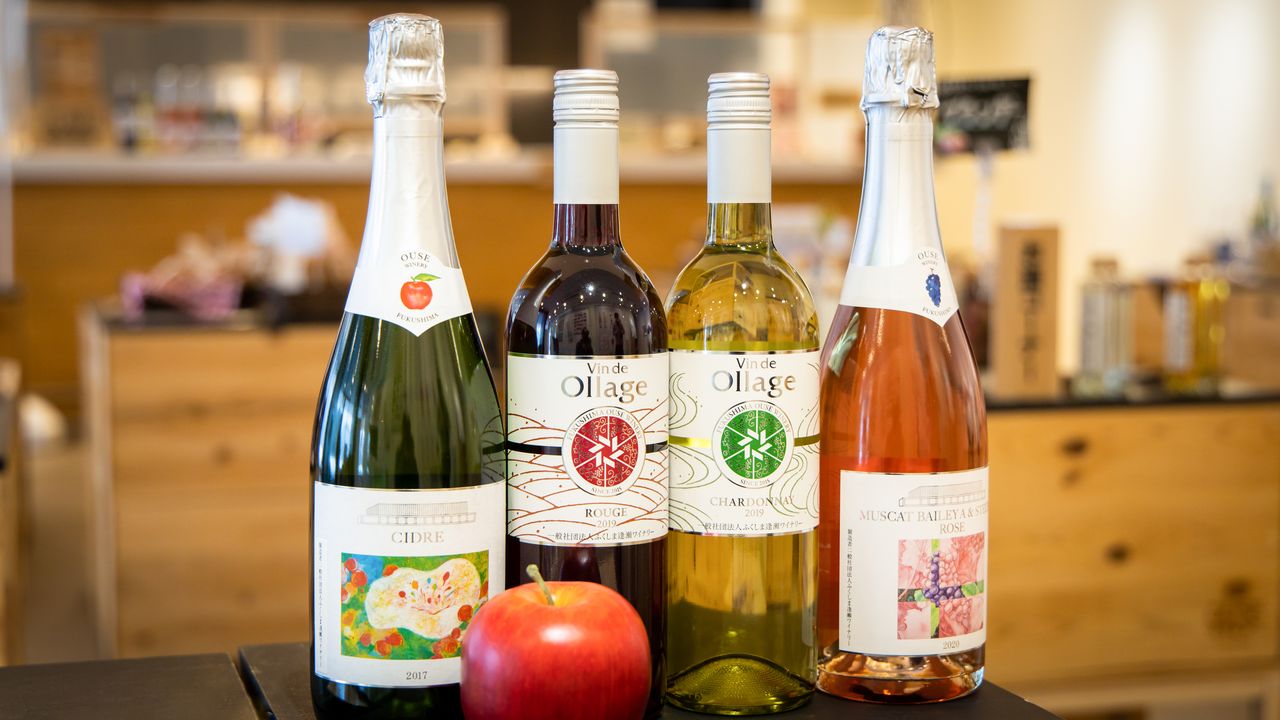 Fukushima Ōse Winery produces wine as well as liqueurs made from apples, peaches, Asian pears, and other locally grown fruit. The winery is on the frontline of efforts to rebuild the reputation of producers in the prefecture and overcome the lingering stigmas of 3/11.

Fukushima Prefecture has long been known as a major fruit producer. A new venture, the Fukushima Ōse Winery, is leveraging this reputation to overcome the lingering impact on local growers from the Fukushima Daiichi accident a decade earlier. Established in 2015, the winery sets on some 9,000 square meters of land nestled between central Kōriyama and Lake Inawashiro in Fukushima’s Tadano district. Since its founding, it has worked with the Mitsubishi Corporation Disaster Relief Foundation and the city of Kōriyama to support Fukushima fruit growers and help them market their products. The winery’s main building houses an impressive array of equipment, including 29 fermentation tanks, a still for distilling brandy, presses, and bottling machinery. The winery’s initial products, cider and liqueurs, have already fared well in competitions, earning high marks at home and abroad. It launched its first, long-awaited label, Vin de Ollage, in 2019, which quickly earned accolades for its clean, crisp taste.

In addition to production facilities, the winery has a shop complete with a wine-tasting corner as well as a small seminar room. It also offers visitors a chance to enjoy nearby attractions, including Lake Inawashiro, Jōdomatsu Park, and several hot-spring resorts. The winery’s fleet of fermentation tanks have a combined capacity of 50,000 liters. The shop includes a wine-tasting corner and also serves nonalcohol drinks made with Fukushima-grown fruits.

In the wake of 3/11, Fukushima has struggled to shake concerns about the safety of its agricultural products. Even now, some consumers avoid buying fresh vegetables, fruits, and seafood from the prefecture. Producers are often forced to sell even high-quality produce for a pittance, with much of what they grow ending up being used as ingredients for other food products. One approach being used to overcome this disadvantage is to develop an integrated system that brings together growers and others who can help market and add value to crops, including branding and selling direct to consumers.

From the time the Fukushima Ōse Winery was set up, the city of Kōriyama has taken the lead to support and encourage local grape growers to cultivate wine grapes. The switch took time to bear fruit though, as vines need three growing seasons before the grapes can be harvested. In the interim, the winery started producing cider and peach- and Asian pear-based liqueurs.

Cidre, the winery’s cider brand, is made from Fuji apples grown in the prefecture. Since going on the market in 2016, it has continued to win awards at competitions in Japan and overseas, including the grand prize in the Fuji Cider Challenge 2020. Another of its creations, the apple brand Ōse Pomme, won the silver prize in the spirits category at the 2019 International Wine and Spirits Competition, notching the highest score for an apple liqueur. Made-in-Fukushima Cidre 2018, winner of the Fuji Cidre Challenge 2020, sold out its production run. Visitors get a close-up view of grapevines in a trial plot on the winery’s grounds. (Courtesy Agriculture and Forestry Department, Kōriyama)

Winemaker Sasaki Hiroshi, a veteran with 25-plus years of experience working in Japan’s prime wine-producing region in Yamanashi Prefecture, oversees the fermentation process at the winery. He describes his duties at Fukushima Ōse in modest terms, claiming that the credit belongs to the growers. “Eighty to ninety percent of a wine’s quality depends on the fruit it’s made from,” he explains, noting the excellence of local vineyards. “Enthusiasts should certainly be looking forward to having a wider selection of Fukushima labels to choose from.” He is equally optimistic about the future of other offerings from the prefecture. “Fukushima-grown fruits are excellent and have great potential as ingredients for liquors.” Winemaker Sasaki Hiroshi explains how the German-made still for producing brandy and other spirits works.

Taking On a New Challenge

The winery’s label Vin de Ollage went on sale in March 2019, eight long years after the March 11 disaster. The word “ollage” was coined from the local patois “orage,” meaning “my home.” Bottles of Vin de Ollage are flanked on the right by Muscat Bailey A & Steuben Rosé 2020, a sparkling wine made from grapes grown in the Fukushima city of Aizu-Wakamatsu, and Cidre 2017 on the left.

After starting out with grapes grown by six producers, the winery now sources from 13 growers. Sasaki notes that harvests are improving year by year in both yield and quality. “The vines are still young, so we’re taking advantage of the juicy grapes they produce,” he says. “They’re already very sweet, and I think we’ll soon be able to produce wine that can more than hold its own against labels from other parts of Japan.”

Now that the winery has actually produced some wines, grape growers are motivated to grow even tastier fruit to make better-tasting wine. Some even hope that they will one day be able to drink wine made exclusively from their own grapes. Nakao Hideaki, proprietor of Kōriyama Nakao Grape Farm, in one of his fields. The farm had been growing other varieties of grapes for 45 years, but switched to wine grapes in 2016. (Courtesy Agriculture and Forestry Department, Kōriyama)

Kawauchi Kōki, managing director of the winery since November 2020, formerly worked for a trading company. Although he had no experience dealing in alcoholic beverages in his former career, he is an avid imbiber who now looks back and regrets that he failed to properly savor what he was drinking, declaring that “I’m truly humbled when I see the loving care that growers devote to their grapes and how they’re perpetually looking for ways to improve their product.” He says that during the Meiji era (1868–1912), the soil in Kōriyama was thought to be unproductive, but that the construction of a systems of irrigation canals in the 1880s to bring water in from Lake Inawashiro made the land fertile. “I believe this pioneering spirit lives on in Fukushima and that growing grapes for wine will succeed.” Nakao says he is happy that the grapes he grows are being used to make wine. (Courtesy Agriculture and Forestry Department, Kōriyama)

Selling Fukushima to the World Through Wine

Kawauchi is a native of Kōriyama and was brought up along the banks of the Ōse River before moving away when he was 18. At the time of the March 11 disaster, he was on assignment in Germany and the news of the Fukushima Daiichi meltdown, which he heard on the radio while riding in a taxi, brought him to tears. He was deeply saddened that the name Fukushima, which people had hardly ever heard of before, now stirred up negative images. He thought his birthplace might disappear and felt powerless to do anything from so far away.

Later, posted to Bangkok, he learned that the Mitsubishi Corporation Disaster Relief Foundation would be creating a winery in Kōriyama and resolved to work there one day. That the winery would bear the name of Ōse was an added bonus.

Now that he is working at the winery, Kawauchi sees his job as a new challenge. “I’ll use what I learned in my previous job and work together with former high school classmates to build the acclaim of this winery, Kōriyama, and Fukushima.” Kawauchi says that following recent regulatory reforms, he has been encouraging growers to obtain licenses to sell alcoholic beverages. “My idea is that they should make wine from their grapes and sell that wine out of their own vineyards, too.” In the truest sense, the wine would really be from orage—my home.

If Fukushima Ōse Winery labels can establish reputations for taste and quality, this will help soften the negative image the prefecture continues to suffer. Raising quality to a level where Fukushima wines can compete with the world’s most famous wine-producing regions will not be easy, but animated by their pioneering spirit, Kōriyama growers and wine-makers are up to the challenge. The quality of the wine grapes grown at the Nakao Grape Farm is improving every year. (Courtesy Agriculture and Forestry Department, Kōriyama)

(Translated from Japanese. Reporting, text, and photos by Nippon.com unless otherwise noted.)

Home Videos The WORLD of WINE – Wine News. Cheap wine, tasting notes and cooking with wine The World of Wine – May 2021 … END_OF_DOCUMENT_TOKEN_TO_BE_REPLACED

How to visit Napa Valley on a Budget. In this video Carson and I explain a few ways to enjoy Napa on the cheap. Tip and advice about how to visit Napa … END_OF_DOCUMENT_TOKEN_TO_BE_REPLACED

Home Videos Get To Know Argentina Wine | Wine Folly If you love Malbec, Argentina is your ultimate wine region. But that’s not … END_OF_DOCUMENT_TOKEN_TO_BE_REPLACED