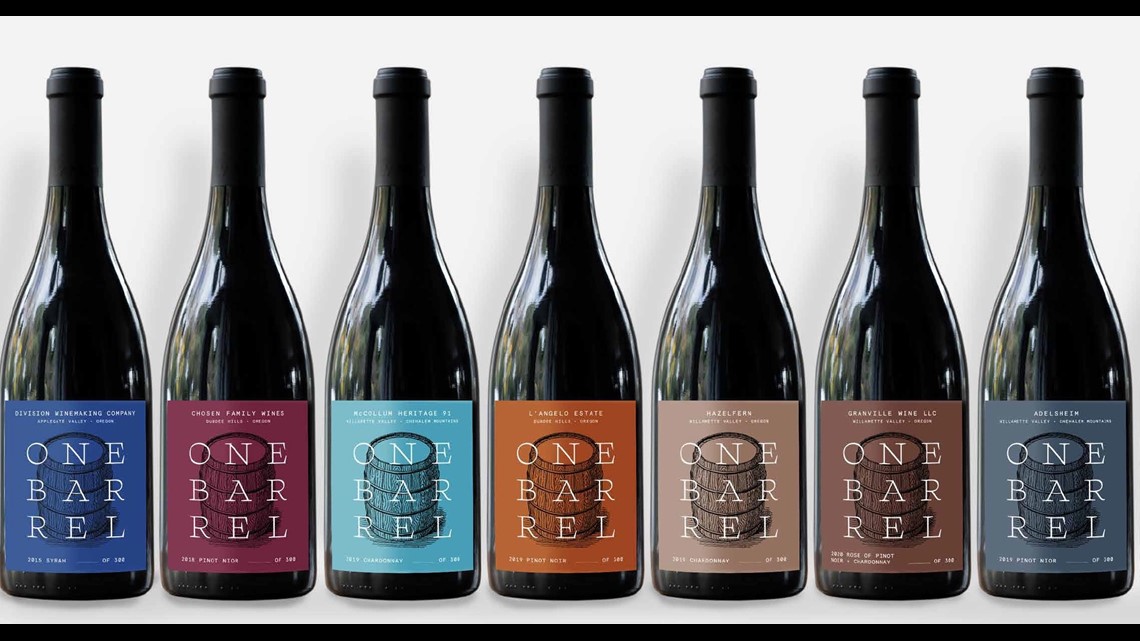 To accomplish that goal, seven wineries have come together for the One Barrel Challenge, happening for the first time ever.

“Each individual brand is selling 300 bottles of wine, and 100% of the proceeds of these wines will go to the Maurice Lucas Foundation in year one,” said Jacob Gray, general manager at L’Angolo Estate Winery and partner in Chosen Family Wines.

The Maurice Lucas Foundation is committed to educational opportunities for kids, especially those in marginalized communities.

One of the people involved is Channing Frye, who owns Chosen Family Wines. His name may sound familiar. He is a retired NBA player. Over the course of his career, Frye has played for the Portland Trail Blazers, New York Knicks, Phoenix Suns, Orlando Magic and the Cleveland Cavaliers.

Frye said he had never gone wine tasting prior to moving to Portland to join the Trail Blazers. Then, it was when he was in Orlando playing for the Magic that he started getting interested in wine. When he played in Cleveland, Frye said he was surrounded by others who also loved wine.

Frye has chosen to enter an industry that historically, lacks diversity.

“When you describe the wine industry, it’s white right? For us to make the best wine […] we would be doing a disservice to say we are, if we’re not getting the perspective of everyone,” he said.

The One Barrel Challenge is meant to be a first step in getting to that inclusive goal.

“Overall, we’re trying to highlight and bring to life more opportunities and the barrier of entry for people of color into the wine industry,” said Gray.

In the vast world of wine, Gray said there aren’t many people of color heading up their own brands.

“When we were launching less than a year ago, there was I think less than 100 Black-owned wine brands. And just in the Willamette Valley, there’s 500 or 600 [wineries]. So, if you think about that globally, it’s a very small number,” Gray said.

Heading toward more diversity in the wine industry

Recently, more people of color have become involved with the wine industry, including Trail Blazer CJ McCollum. His wine company, McCollum Heritage 91, is also part of the One Barrel Challenge. Moving forward, the hope is that the One Barrel Challenge will help break down barriers of entry for people of color. At some point down the road, Gray said they also hope to add more educational opportunities and potentially scholarships. But this first year is the first step.

Gray, who was one of the people who came up with the idea, said it was spurred through heartfelt conversations with Frye and other friends on topics such as social injustice. They brainstormed about how the wine industry could make a difference and help create change.

“We are just trying to make something that we love complete,” said Frye.

Promoting opportunities for everyone

For Frye, his support and involvement in the initiative goes deep, and it’s personal. He has three daughters and a son.

“I’m trying to show them successful women and people of color that are doing this, and for my son it’s like I want him to have any option in the world,” said Frye.

He said often, kids of color grow up seeing people who look like them becoming rappers or athletes. Frye wants to help open doors and welcome different perspectives.

“I want these kids to see me and Dwayne Wade, CJ McCollum and Josh Hart and all of us and everyone else that I missed, to say, ‘oh dang I’m interested in the wine industry. Let me learn where I may fit.’”

Both Frye and Gray said getting into the wine industry doesn’t necessarily mean being a winemaker. There are so many different opportunities to be involved in Oregon’s wine industry, whether that’s designing bottle labels, interiors, working in distribution or making videos for wineries.

As for the One Barrel Challenge, people can start buying the wines on May 1.

Participating wineries and wine developed for the One Barrel Challenge:

You can find all the details on onebarrelchallenge.com

Home Videos The WORLD of WINE – Wine News. Cheap wine, tasting notes and cooking with wine The World of Wine – May 2021 … END_OF_DOCUMENT_TOKEN_TO_BE_REPLACED

How to visit Napa Valley on a Budget. In this video Carson and I explain a few ways to enjoy Napa on the cheap. Tip and advice about how to visit Napa … END_OF_DOCUMENT_TOKEN_TO_BE_REPLACED

Home Videos Get To Know Argentina Wine | Wine Folly If you love Malbec, Argentina is your ultimate wine region. But that’s not … END_OF_DOCUMENT_TOKEN_TO_BE_REPLACED