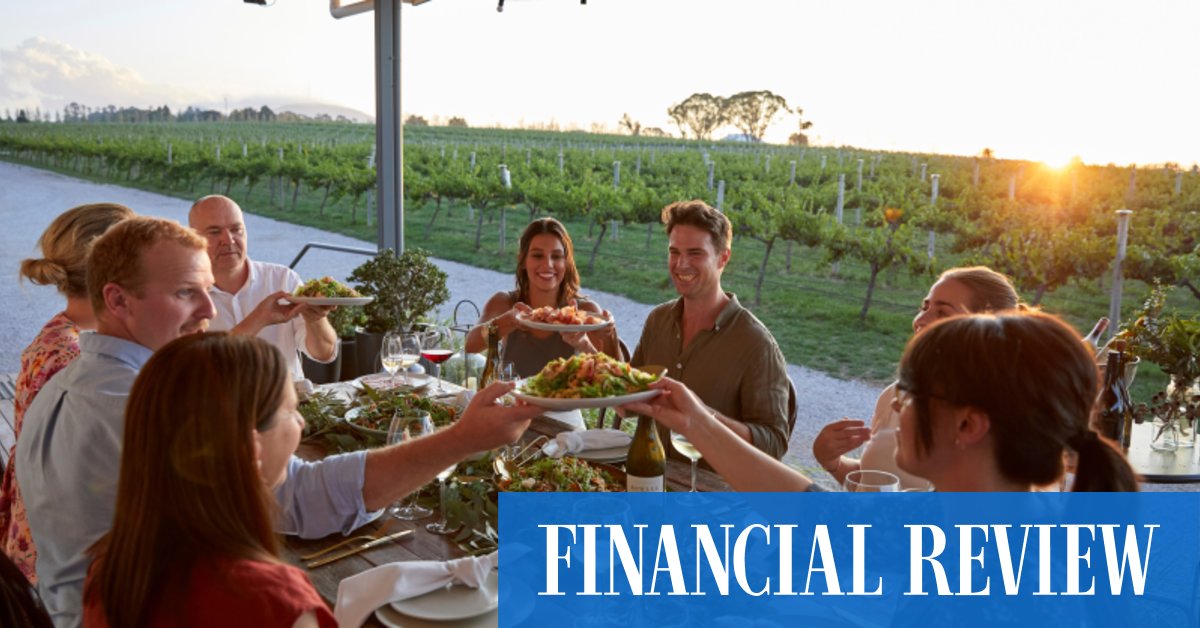 Orange is ripe with new beginnings. A year after COVID-19 closed Nicole Farrell’s boutique tour company Red Door Tours – forcing her to cancel seven textile safaris to India and Morocco – she is curating memorable experiences in her backyard instead.

“I’m a poster girl for the pivot!” she says as we cross the square outside the Orange Visitor Centre, where locals are attending crop swap day.

“I got three [tours] to India before the world shut down.”

Farrell wasn’t going to let a pandemic quash her passion for food and culture. That world had shrunk, for now, and was contained by the dimensions of the golden swatch of land fanning out beyond her front door (and named Orange, some say, for the glow of wattle observed by settlers as they crested the hills here in 1821). But what a rich inheritance it was, for this NSW Central Tablelands city has long been established as a food and cool-climate wine destination; indeed, it is home to Australia’s longest-running food festival, Orange F.O.O.D Week, which celebrates its 30th birthday this year.

Winding in the viewfinder and adopting a more granular perspective, Farrell set about applying her experience as an international tour guide to the singular (but often overlooked) delights of the city in which she was born and in which she has lived most of her life. The result is a new company, Country Food Trails, which offers a range of experiences that pair the region’s bacchanalian delights with the indelible stories of the people who produce them. Since launching in September last year, she has barely come up for breath.

We bypass the crop-swappers exchanging voluptuous bunches of leeks and florid bouquets of beetroots and enter a garden thick with bush tucker planted by Gerald Power, founder of Indigenous Cultural Adventures. Beyond the flamboyant stands of river mint (“good for a headache”) and Warrigal greens (“the answer to scurvy”), Power is setting out damper and brewing tea flavoured with ironbark honey and lemon myrtle plucked from this garden. The logo on his shirt – centred on two tiny footprints – encapsulates the theme of nourishment and rebirth.

“Whenever you see a footprint,” he says, “for Indigenous people it means there’s a new beginning.”

Power’s new beginning dawned in June 2016 when, after 16 years as a public servant working mostly with Aboriginal services, he “chucked the car keys in there, the corporate cards, the phone, said ‘I’ve done my last’ at 5.30pm” – and launched an organisation that would preserve Indigenous heritage (Indigenous Cultural Adventures has received approval from local Wiradjuri elders).

“We needed to start sharing, to get this story out,” he says. “Sharing our journey was the catchcry.”

That journey was inspired by Power’s childhood in Townsville, where the self-confessed “wild child” was profoundly influenced by his grandmother. It was in her kitchen that he learnt to make the bush tomato relishes, lemon myrtle marmalades, marinated kangaroo and wattle seed biscuits he shares in his cooking classes and tasting demonstrations.

“Every time I’d do something wrong I’d end up at Nana’s, so this is Nana,” he says, gesturing at the spread before us. “This is who I am. There was never really any method, she’d just lump it all together. It comes from the heart.”

Power cross-pollinates his traditions with those of other local businesses. Besides working with Farrell, he advises nurseries on edible native plants and provides Orange’s gelataria, Spilt Milk, with lemon myrtle for use in its signature gelato.

“It goes real fast,” he warns of the ice-cream flavour. “It has a base of honeycomb, and it’s delicious.”

(Alas, the lemon myrtle gelato is, as prophesied, sold out when I stop by next day, so I have to settle for a salted caramel scoop instead.)

Making its own fresh start up the road on Hill Street is the charming Hibernian Australasian Catholic Benefit Society hall, a 104-year-old heritage building now living life as Ferment wine bar. Here, Farrell singles out local produce for our charcuterie board: taramasalata from Fresh Fodder; truffle cacciatore, fennel salami and bresaola from Cured Orange; camembert, Roobie Blue and Swiss-style Henri from The Second Mouse Cheese Co; fruit from a local orchard. The feast is washed down with wines from vineyards for which Ferment serves as a proxy cellar door.

Proprietor Simon Forsyth, a former advertising executive, forged a new path 10 years ago after moving to the only wine region in Australia defined by elevation.

“I used to live in Sydney – I was an amateur drinker then,” he says with a wry smile. “Now I’m a professional drinker.”

Ten kilometres outside town, on the basaltic slopes of Mount Canobolas, Lee and Dave Bell tend their pint-sized family vineyard after making the tree change from Sydney 20 years ago. With a mutual interest in astronomy, they named the winery (run with son James) Dindima, the Wiradjuri term for “group of stars”.

“When did I start my interest in wine?” asks Lee, a teacher and education department bureaucrat in her former life. “When I was a student. I think I drank more shiraz mataros than I should have.”

Though we’re wine tasting in broad daylight, the stars are bursting in Dindima’s sparkling blanc de blanc (named Starburst) and Saturn is glowering in the scarlet rosé.

“It’s not a Provençal rosé, it’s a rosé with attitude,” says Lee. “It opens up a whole lot of cuisines you might not have thought of pairing it with – spicy, chilli, Persian.”

Subdued by Starburst and sunshine, I’m shuttled by Farrell along winding roads to Norland Fig Farm; here, proprietors David and Alison Dinham – comparatively new to the area after moving from their broad-acre farm between Forbes and Grenfell four years ago – are anticipating a bumper harvest.

“This year we know we’re going to grow more because we’ve had two droughts in a row, and we pruned them hard,” says David.

Already the cult fig followers are converging on the orchard. A group of Sydneysiders dressed in fluorescent seventies costumes has pulled up in a flashy car; they’re on their way to a themed party, but are attending to priorities first: scoring the Dinhams’ sought-after chutneys and fig pastes. They might be a flock of birds in their bright miniskirts and flapping trousers; these figs drive birds every bit as wild, David says.

“Starlings come in their thousands, and they like to taste test every piece of fruit they find.”

Fittingly, Farrell ends our tour on a high, at Tawarri Grove, Australia’s most elevated olive plantation. Twenty-one years ago, farmers Rosslyn and David Kemp segued from sheep to olives, planting 3000 Tuscan olive trees here; like their Italian counterparts, they receive a dusting of snow each winter. In spring, they shake off the frost and the mists rolling down the slopes of Mount Canobolas. In early summer they flower. And in autumn, at last, they are ripe for fresh pickings, ready for new beginnings.

Catherine Marshall was a guest of Country Food Trails.

Orange is a 3½-hour drive from Sydney. Qantas and Rex Airlines fly direct from Sydney to Orange, with connections from other destinations. See qantas.com and rex.com.au.

Country Food Trails offers a range of experiences including mushroom foraging, an ale trail and a saffron trail. Prices start from about $115 including tastings. See countryfoodtrails.com.au. Australia’s longest-running food festival, Orange F.O.O.D Week, celebrates its 30th anniversary this year with a packed program from April 9 to 18. Bookings are essential. See orangefoodweek.com.au.

Follow the topics, people and companies that matter to you.

Catherine MarshallFreelance travel writerCatherine Marshall started her career as a hard news journalist in her native South Africa as a naive 20-year-old. More than two decades later the Sydney-based writer specialises in travel writing. Connect with Catherine on Instagram and Twitter.

Home Videos The WORLD of WINE – Wine News. Cheap wine, tasting notes and cooking with wine The World of Wine – May 2021 … END_OF_DOCUMENT_TOKEN_TO_BE_REPLACED

How to visit Napa Valley on a Budget. In this video Carson and I explain a few ways to enjoy Napa on the cheap. Tip and advice about how to visit Napa … END_OF_DOCUMENT_TOKEN_TO_BE_REPLACED

Home Videos Get To Know Argentina Wine | Wine Folly If you love Malbec, Argentina is your ultimate wine region. But that’s not … END_OF_DOCUMENT_TOKEN_TO_BE_REPLACED