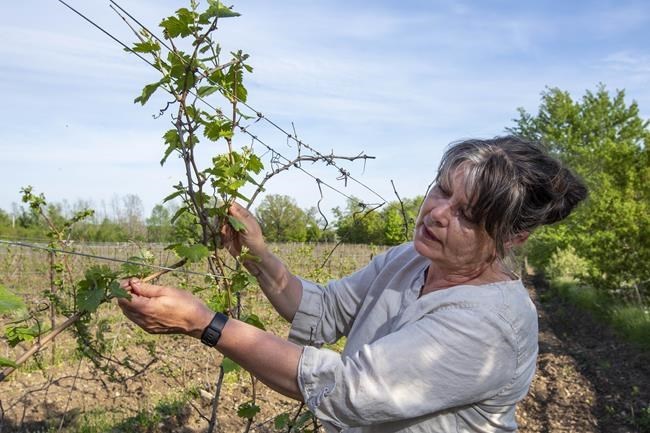 Caroline Granger couldn’t imagine a worse year for her small winery. Granger said that the COVID-19 pandemic has damaged almost every aspect of The Grange of Prince Edward Vineyards and Estate Winery in Hillier, Ont.

Granger said that the COVID-19 pandemic has damaged almost every aspect of The Grange of Prince Edward Vineyards and Estate Winery in Hillier, Ont., which she runs with her daughter.

“I’m a farmer and a worrier and I love to make up all the bad things that could possibly happen and I could never imagine such a perfect storm,” she said.

Granger estimates that in a typical year 50 per cent of her revenue comes from retail sales, either at local liquor stores, restaurants, or from wine enthusiasts visiting her farm and purchasing bottles after a tasting.

But Ontario’s ongoing COVID-19 restrictions have prevented her from hosting oenophiles and the restaurants she partners with are closed for in-person dining. That leaves the LCBO and online sales as income sources.

At the same time, the grapes still have to come off the vine.

Most of the 180 wineries in Ontario are family-run operations with fewer than 20 employees. The Grange, like many of Ontario’s wineries, relies on migrant workers to help bring in her crops but travel restrictions have made that challenging.

On top of that, Granger’s usual crew of labourers lives on the Caribbean island of St. Vincent, which was rocked by a volcanic eruption last month, endangering the lives of employees she now considers family.

“Maybe what I should be doing is prepping for a plague of locusts because it’s been a pretty wild ride,” said Granger.

According to Vintners Quality Alliance Ontario, wineries in the province’s wine-producing regions contribute to 18,000 jobs with a total economic benefit of more than $4 billion per year. Every bottle of VQA wine sold generates $98.20 in economic benefit for the province.

J. Murray Souter, the CEO and president of Lakeview Wine Co. in Niagara-on-the-Lake, said that about 40 per cent of his business traditionally comes from exports and restaurant sales, two revenue streams that have been evaporated by the pandemic.

He said he hopes that there is some level of reopening to Ontario’s economy this summer, but that he recognizes that some safety protocols will stay in place for the foreseeable future.

“It’s been a desert down there over the past 12 months,” said Souter. “We’d traditionally have five or six thousand people visit our winery over the course of a week in the summer and we haven’t had that many over the past year.”

Ed Madronich, president of Flat Rock Cellars in Jordan, Ont., said that the pandemic has made him evolve his business model.

“It’s forced us to get online, get online quickly, and make sure we’re communicating and facilitating people being able to buy our wine,” said Madronich. “We saw a real growth in that particularly at the beginning of COVID, but it’s not the same a year later, (sales are) definitely down from last year.”

Although Granger and Souter operate at different scales, they both said they would like to see the provincial government adjust how wine is taxed in Ontario.

“The reason the Spanish can land a bottle of wine in this country at $7.95, which means they’re shipping it out at $2.50, is because they subsidize the industry,” said Souter, who is also the vice-chair of the Winery Growers of Ontario. “Either create a barrier for them dumping their product here or support us at the same level their governments support their industry.”

This report by The Canadian Press was first published May 23, 2021.

Home Videos The WORLD of WINE – Wine News. Cheap wine, tasting notes and cooking with wine The World of Wine – May 2021 … END_OF_DOCUMENT_TOKEN_TO_BE_REPLACED

How to visit Napa Valley on a Budget. In this video Carson and I explain a few ways to enjoy Napa on the cheap. Tip and advice about how to visit Napa … END_OF_DOCUMENT_TOKEN_TO_BE_REPLACED

Home Videos Get To Know Argentina Wine | Wine Folly If you love Malbec, Argentina is your ultimate wine region. But that’s not … END_OF_DOCUMENT_TOKEN_TO_BE_REPLACED