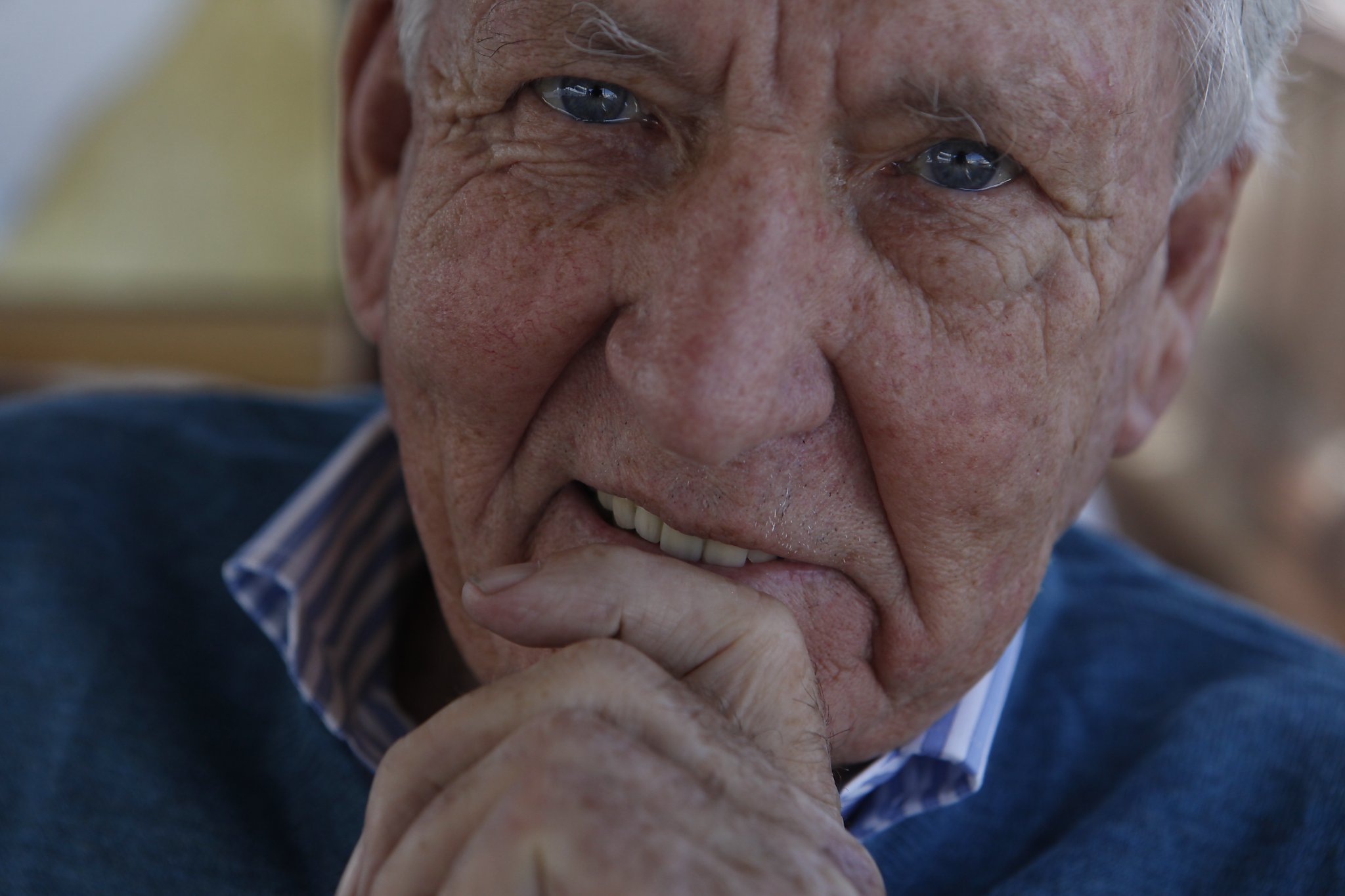 The reactions to the redesigned Anchor beer labels, unveiled on Monday, have been passionate. On Twitter, fans of the San Francisco brewery expressed their displeasure, comparing Anchor Steam’s new blue-and-yellow palette to the coloring of Ikea, Twisted Tea, Long John Silver’s and “a detergent box.” (According to my colleague Peter Hartlaub, however, it’s still not the most unpopular S.F. logo change; that belongs to the 49ers in 1991.)

But as much as I was interested in the reactions of local beer drinkers, there was one person whose opinion I felt I really needed to seek out. That’s Jim Stitt, the 93-year-old illustrator who hand-drew all of Anchor Brewing’s labels for 45 years before retiring in 2019.

Stitt, who lives in San Rafael, had been aware that a redesign was in the works, but hadn’t seen the final product until this week. When I asked for his reaction, he was very diplomatic. “Of course I can’t be critical of them,” he said. “I expected them to make some major modifications, and they did. I think it’s OK. It’s not bad, it’s just different.”

What struck Stitt was that the labels seem designed to stand out in a store. “I saw a very strong shelf impact,” he said. “I think what they’ve done is probably correct for the current audience.” Anchor, which has been owned by Japanese beer company Sapporo since 2017, tapped San Francisco design firm R/GA to work on the rebrand, with help from the firm Swig and artists Steve Noble and Nathan Yoder.

By the time Anchor’s then-owner Fritz Maytag tapped him to illustrate the Anchor Porter label, in 1974, Stitt had already led a remarkable life. The Seattle native had served in the Navy in World War II (“bootcamp was a living hell for a skinny little 17-year-old”) and in the Marines during the Korean War. He’d worked as a technical illustrator for Boeing, then spent three decades with an advertising agency in Los Angeles before moving up to San Francisco and going freelance.

In addition to Anchor’s beers, Stitt drew the labels for many of the Anchor Distilling products, including Old Potrero whiskey and Junipero gin. He was also a prolific designer of wine labels, working for wineries including Kendall-Jackson, Rodney Strong and Franzia, whose bag-in-box packaging he did in the 1980s.

He recalled his first encounter with Maytag, who came to Stitt’s office on Stockton Street in order to vet him as a prospective label artist. “I laid my book on the floor and Fritz looked at it and said, ‘mm-hmm,’” Stitt said, “and then I didn’t hear from him for another four months.”

Yet that meeting would go on to determine the aesthetic that defined Anchor Brewing for its next four decades. The labels that Stitt designed — beginning with the porter, then Liberty Ale and Old Foghorn in 1975 — have a homespun, old-fashioned feeling to them. Many feature an anchor at the center of the oval-shaped label, often garnished by some combination of hops and barley. Although a version of the steam beer’s label was already in place when Stitt came on board, he modified it in small ways over the years. (In 2019, I compiled a timeline of all the beers Anchor had ever made along with their labels, which provides a nice view into Stitt’s style.)

Most of the articles written about Stitt revolve around his work on Anchor’s Christmas Ale, introduced in 1975. Just as the beer’s recipe changes every year, the label changes too, featuring a different California tree each time. The process would usually begin with Maytag choosing a tree, discussing it with Stitt and longtime Anchor historian Dave Burkhart (often on the Sausalito yacht where Stitt lived for 35 years), and then sending Stitt out to Muir Woods, or Golden Gate Park, or Maytag’s Napa Valley ranch — wherever he could find a living subject. He said Maytag always gave him total creative liberty.

“I grew up in the age of illustration,” Stitt said. “I was pre-computer. Of course, I didn’t have a computer. Everything was hand-drawn.” That included the labels’ borders and lettering, which Stitt always did by hand. When speaking about Stitt, Maytag liked to use the catchphrase “handmade beers require handmade labels.”

Stitt’s favorite Anchor label remains his first, Anchor Porter. He likes the blue shadowing on the word “Anchor” and the way “Porter” is amplified at the bottom. He still hasn’t seen the newly redesigned Porter label.

On Tuesday, Stitt went to the store to try to see the new bottles and cans up close. His local liquor shop hadn’t yet switched over. He bought two six-packs, still with their original labels: one of Anchor Steam and one of Anchor Porter.

This week, I’m drinking Cruse Wine Co.’s delicious and bone-dry Muscat, from grapes grown at the Rorick Heritage Vineyard in the Sierra foothills. I love the wine, and I also loved the chance to think about the peculiar role that Muscat plays in the world of wine. It’s one of the important progenitors in the wine-grape family tree and has been celebrated since antiquity — yet in modern times it’s often been derided and dismissed for its cloying qualities. Muscat is also one of the few varieties whose grapes are at least as delicious to eat as the resulting wine is to drink. Read my review of the Cruse Muscat here.

• California got the green light to partially reopen this week, after Gov. Gavin Newsom lifted the stay-at-home orders that had gone into effect in December. Among the business allowed to resume in-person service: restaurants and wineries, though the outdoor-only requirement is proving tricky due to the atmospheric river in the forecast. I outlined what you should know if you’re thinking of going wine tasting again.

• Nick Gislason, winemaker at Napa’s Screaming Eagle — which commands long wait lists for its $1,000+ bottles of Cabernet Sauvignon — is now making beer on the side, reports Aaron Goldfarb in VinePair. And this isn’t fancy, barrel-aged, fruit-infused ale. Gislason brews only lager, and a six-pack costs $90.

• California restaurant workers will be prioritized for coronavirus vaccines, The Chronicle’s Janelle Bitker writes, despite rumors to the contrary.

• A nonalcoholic bar has opened on the beach in San Francisco — an appropriate arrival for dry January. In SFGate, Madeline Wells explores the backstory of the new Ocean Beach Cafe.

Home Videos The WORLD of WINE – Wine News. Cheap wine, tasting notes and cooking with wine The World of Wine – May 2021 … END_OF_DOCUMENT_TOKEN_TO_BE_REPLACED

How to visit Napa Valley on a Budget. In this video Carson and I explain a few ways to enjoy Napa on the cheap. Tip and advice about how to visit Napa … END_OF_DOCUMENT_TOKEN_TO_BE_REPLACED

Home Videos Get To Know Argentina Wine | Wine Folly If you love Malbec, Argentina is your ultimate wine region. But that’s not … END_OF_DOCUMENT_TOKEN_TO_BE_REPLACED