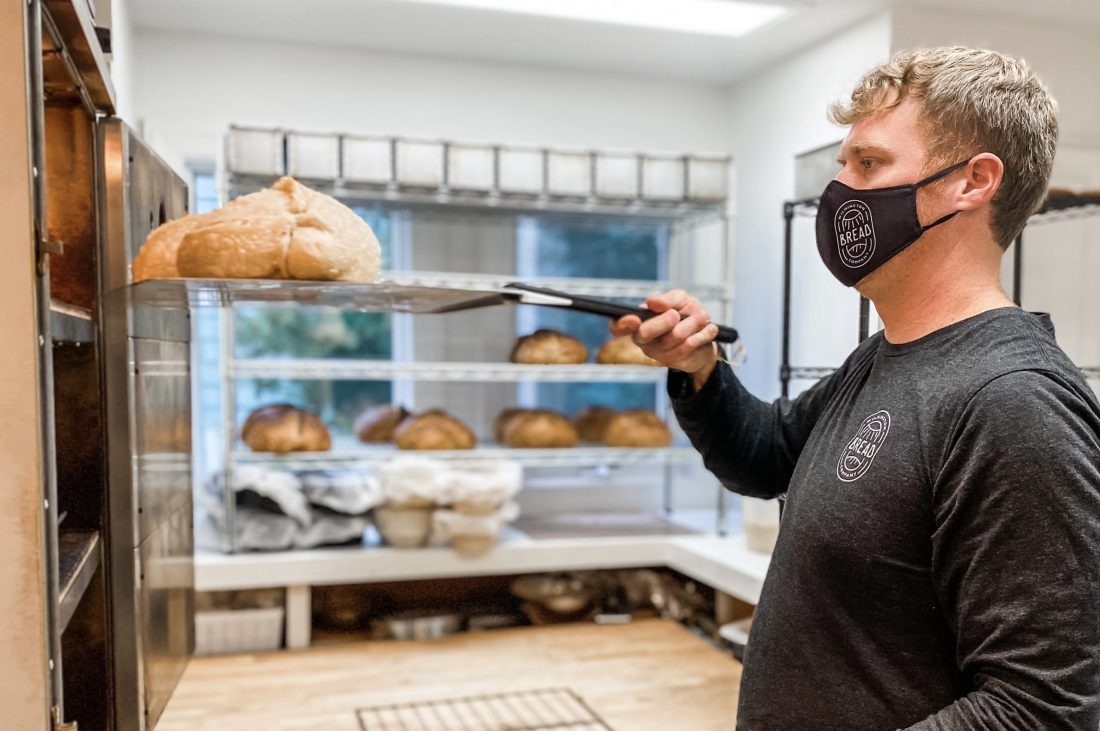 WRIGHTSVILLE BEACH — In 2019, when Kevin Connor went on the hunt for the best pizza dough recipe, little did he know a newfound passion would rise instead.

From the pages of “Flour, Water, Salt, Yeast: The Fundamentals of Artisan Bread and Pizza” by Ken Forkish, Connor became inspired by the art of making the perfect loaf of naturally leavened bread. A mere interest as a hobby has since organically grown into a business, Wilmington Bread Company.

“Probably 75% of the book wasn’t about pizza at all,” Connor said. “It was about bread. And my boys love bread.”

A working CPA and part-time stay-at-home dad, Connor wanted to find ways to spend quality time with his sons. Making bread seemed perfect, since his boys could physically see Dad create a tangible product with his hands.

“It’s something that my 5-year-old has started to express some interest in too,” Connor said. “He wants to help me carry the baskets of dough into the refrigerator where they proof overnight. It’s really been fun to work hard at home and have my kids see my hands are in the dough, dumping it out, shaping it — it’s a physical act that’s easier for a child to understand that, yes, this is work, but it’s enjoyable.”

Connor started experimenting first with sourdough. It was a familiar process, seeing as a few years prior he was homebrewing beer and making wine. Fermentation fascinated him, Connor said.

“I always thought sourdough was just sour bread,” he admitted. “But I learned it is naturally fermented bread, made without commercial yeast.”

One loaf turned into two, three, four … a dozen. He was testing out his bread on his wife, kids and neighbors.

“I started making more and more and more, and eventually I was at the farmers market and met Amanda Jacobs from Sea Love Sea Salt.”

Connor took interest in Jacobs’ salt process, which is solar evaporated from Wrighstville Beach and sold locally. He decided to make some standard country white sourdough with it and then tested the waters of popularity at the Wrighstville Beach Farmers Market.

“The loaves sold out in 5 minutes,” Connor said.

This was summer 2019. Shortly after, fans began placing orders and coming for the freshly kneaded loaves at Connor’s home. He operated Wilmington Bread Company as a cottage bakery, placing a bread locker on the porch where the preorders awaited customers.

“We would get to know folks,” Connor said. “That’s honestly one of the most exciting things about this business: who I’ve gotten to meet and talk to. It introduces you to people you may never have crossed paths with.”

By the time Covid-19 hit last spring, Connor began to rethink the operation.

“All of a sudden, having scores of people showing up on your porch wasn’t a great idea,” he said.

Wilmington Bread Company switched to a delivery system instead. Folks could preorder through the week and get bread delivered every Friday and Saturday.

Connor was growing his flavors, too, still using Sea Love Sea Salt as a finish on his rosemary-sea salt loaf. He also began making a sesame-spelt loaf, pumpkin seed and turmeric, flax and sunflower seed, garlic-parmesan, and cinnamon raisin with local honey. He even produced sprouted spelt loaves in a traditional rectangle pan for sliced bread for sandwiches. The common denominator among all of his bread is they are naturally leavened.

“Bacteria are present in the flour, in the air, or in your starter,” Connor explained. “There is never a commercial yeast added to any of my bread. So what happens is the dough is fermented, and as a result of that fermentation, there’s gas released, and if you properly develop the dough, the gluten matrix and the dough captures the gas, which leavens the bread, so it develops flavor and makes the bread more digestible.”

It doesn’t necessarily mean the bread is safe for consumption for those who have gluten intolerances, Connor clarified. It’s just easier on the digestive tract than breads made with aerated flour.

“Commercial yeasts work so quickly that they consume the simple sugars first and aerate the bread, and then, boom, you bake and you’re done,” he explained. “So you’re kind of left with, in my opinion, not as much flavor and not as much digestibility in the product.”

Connor goes through 25 or more gallons of reverse osmosis water a week to produce his loaves. He procures it from Tidal Creek Co-op. One day last fall, he hauled in a bunch of jugs to refill when someone from the store commented on the amount he was getting.

“I make a lot of bread,” Connor told them, which then led to a conversation about Wilmington Bread Company.

By word of mouth, Connor already had a few wholesale clients, including Adapt Kitchen and Juice Bar, located inside Robert’s Grocery Store on Wrightsville. The kitchen was using Connor’s bread for their avocado toasts, as well as selling loaves. He also had Heritage Market in Brunswick County and Casa Blanca Coffee Roasters on Market Street.

By the end of his chat at Tidal Creek, Connor had a new client. It also changed Wilmington Bread Company’s business model once again: away from deliveries and personal orders and into wholesale only.

Already, Connor had begun increasing his baking space into a separate room in his home throughout the pandemic. Bags upon bags of ancient grains are stored by the pallet load from N.C. farm Lindley Mills. He also upgraded his equipment, with a Rofco oven that can hold 12 loaves of bread at a time and 39 cookies simultaneously.

Connor expanded into making the sweet treat after seeing on Instagram a recipe posted from a Greensboro cottage baker and former pastry chef.

“When I tried them, I was like, ‘Holy moly!’” Connor said. “These have changed cookies forever. I don’t know that I’ll ever be able to eat another recipe.”

Connor tweaked it with his own spin and now delivers a chocolate-chunk sourdough version and a macadamia and white-chocolate-chip flavor made with sprouted-spelt to Tidal Creek and Heritage Market weekly.

“I prefer making bread to the cookies,” Connor clarified, “but the cookies are now required. I don’t think I could ever get away from them because people love them so much.”

He bakes around 150 loaves a week and more than 18 dozen cookies. Every week, his clients sell out of inventory.

“I’ve always wanted to get to a level where I’m stretched but comfortable,” Connor said.

He said as of now he has found the balance of splitting time between his job as a tax consultant, enjoying his young children and wife, while also managing a newfound passion for dough.

Currently, he bakes only three days a week, while fermenting and proofing another three days — the latter of which is basically “passive time,” not requiring much of Connor’s attention, he said. Though he isn’t interested into expanding confections, like pies or cakes, he has started experimenting with baguettes, ciabatta croissants, and incorporating more whole grains.

“Honestly, over time, I’d love to develop relationships with farmers who are growing the grains and source them directly,” Connor said.

He bought a small mill to begin experimenting with grinding down his flours. Connor has worked with modern wheat, spelt, kamut, emmer, and other grains for unique flavor profiles.

He also had to bring in help. Once he found out his nanny happened to have a culinary degree, it seemed like a serendipitous working relationship.

Connor can easily expand the business — though it would require more space, hands and time to ramp up production. Essentially, though, he said he is in no rush.

“Quality is the most important thing for me,” Connor said. “I would rather lose revenue than have quality suffer — and that’s through every step of the way: ingredients, process, packaging. I want Wilmington Bread Company to be the highest quality and something I’m proud of every single time a product goes out the door.”

Want to read more from Port City Daily? Subscribe now and then sign up for our morning newsletter, Wilmington Wire, and get the headlines delivered to your inbox every morning.

Home Videos The WORLD of WINE – Wine News. Cheap wine, tasting notes and cooking with wine The World of Wine – May 2021 … END_OF_DOCUMENT_TOKEN_TO_BE_REPLACED

How to visit Napa Valley on a Budget. In this video Carson and I explain a few ways to enjoy Napa on the cheap. Tip and advice about how to visit Napa … END_OF_DOCUMENT_TOKEN_TO_BE_REPLACED

Home Videos Get To Know Argentina Wine | Wine Folly If you love Malbec, Argentina is your ultimate wine region. But that’s not … END_OF_DOCUMENT_TOKEN_TO_BE_REPLACED