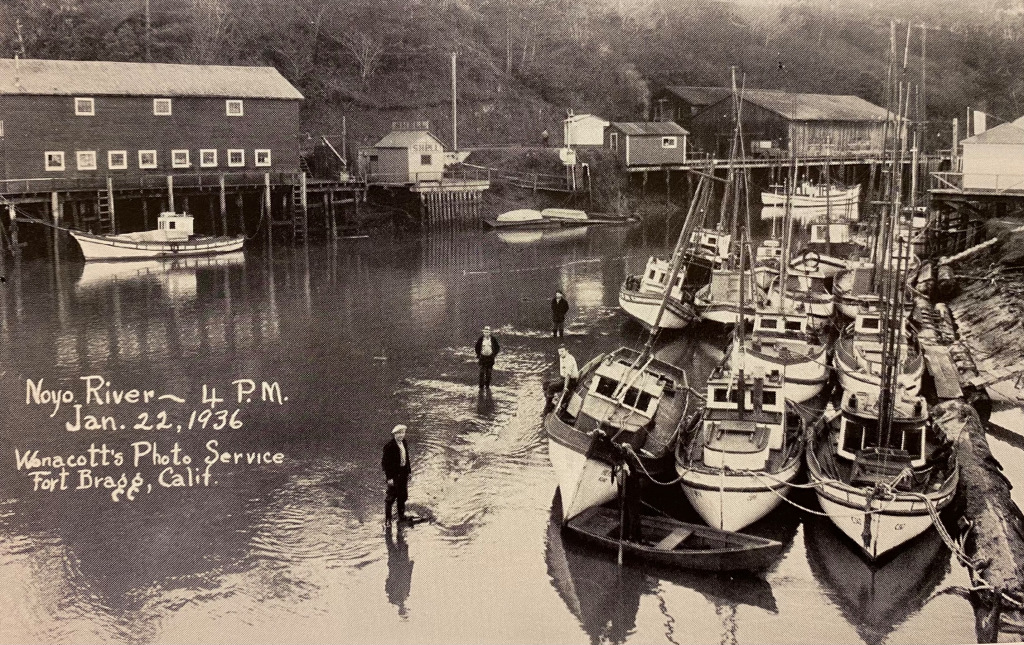 • The steamer Maggie Ross arrived here yesterday morning for a load of lumber. This is Maggie’s first trip to Mendocino.

• R. Y. Glidden, editor and manager of the Record and principal of the public school at Point Arena, celebrated on Washington’s birthday by uniting in marriage to Miss Jennie Minor.

• A. R. Calder, who has carried on the tailoring business in this place for several years, will leave next week for Santa Barbara, where he has accepted the management of a tailoring establishment.

• The steamer Navarro will make regular trips to this port in the future. She left Tuesday night for San Francisco with a load of lumber.

• The skating rink opened in Tivoli Hall Saturday night. A large number attended and the Mendocino brass band discoursed music, which added much to the enjoyment.

• At a conference of Mendocino and Humboldt county lumbermen held in San Francisco this week it was practically decided to establish the eight-hour day in the lumbering plants of the firms operating in these two counties. The mills in the Northwest which have been getting out Government orders for ships and aeroplane stock were some time ago placed on an eight-hour basis, and California lumbermen have concluded to adopt the same schedule. Mendocino county mills will continue to operate ten hours as at present, but will designate the extra two hours as overtime and allow compensation for the same at the rate of time and a half. The general increase in wages under this new schedule will be ten per cent.

• Mr. and Mrs. Chester Bishop departed Tuesday for a few days’ visit with their daughter. Mrs. F. Baroni, and family of Richmond. They had planned to return Friday and were going to bring the young grandson home with them. Taddy prefers to live in Mendocino and help grandpa on the delivery truck.

• Clifford Doolittle arrived home on Tuesday with an honorable discharge from the U. S. Army. He had been in the European arena since entering the service.

• Warrant Officer Alex (Pat) Stenberg is now in his civvies and glad to be home from the wars. Young Pat is the son of Mr. and Mrs. Pat Stenberg and has just completed a 5 year stretch with Uncle Sam. He will remain in Fort Bragg for the time being.

• Sam Iverson has returned from overseas duty with the U. S. Engineers and is proudly wearing his discharge button.

• Corporal Frank Sturges, Jr., has been discharged from the 20th Armored Division at Camp Cook after serving three years.

• Mendocino rejects incorporation – with 326 voters going to the polls, the vote was 128 in favor, and 198 opposed. According to the inspector of special voting precincts, there were 360 eligible voters in the proposed district and 90 percent turned out to vote.

• Change in delivery date – this week the Mendocino Beacon changed to a Thursday morning delivery instead of Friday.

• Jean A. MacCallum, the daughter of Mendocino pioneers, Alexander and Daisy MacCallum, passed away in San Francisco on Feb. 17, and was interred at Cypress Lawn Memorial Park on Feb. 19. She was born at Glen Blair, 85 years ago. Her will was filed and cash bequests went to four cousins, members of the Kelley family, $2,000 to the Mendocino Presbyterian Church, the residue being placed in a trust for various charities. Included in the trust was the MacCallum house in Mendocino, built by her grandfather, William Kelley and given to Daisy MacCallum as a wedding present.

• Safeway to open new store at Fort Bragg on March 4.

• Al Need’s oils and Lois Need’s batiks will be shown at the Austin Gallery in Santa Barbara, opening on March 8 – They will then be shown in a family show at the Town and Country Gallery in Palo Alto, opening April 12. The Needs have had their own gallery in Mendocino for seven years.

• Whales have already been observed on their northern migratory route off the Coast, and for the ninth year, the big mammal’s expedition is being celebrated during the annual Whale Festival. In Mendocino wine tasting is coupled with a tour of galleries and shops. For Saturday night’s entertainment Crown Hall will be the place to go where two one-act plays can be seen; “Maria of Romania” and “Laundry and Bourbon.”

• Amelia Paoli Byrne, 80, a Mendocino resident passed away Feb. 11 at her daughter’s home following a long illness. She was a member of the early pioneer Paoli family of Mendocino, where she was born, raised and educated. In 1932, she moved to San Francisco where she was employed as a gardener at the nursery and conservatory at Golden Gate Park. In 1950, she returned to Mendocino, where she resided until her death. She loved raising rhododendrons and vegetables, which she canned and entered in the Boonville Fair, winning several blue ribbons.

• Golf Notes, etc… By Harry Fortune: Go out and enjoy our game as you have never enjoyed it before, because it’s the only game that will be waiting for us to play in the hereafter. We all want our game to be in the best possible shape when we head for the grand country club in the sky.

Home Videos The WORLD of WINE – Wine News. Cheap wine, tasting notes and cooking with wine The World of Wine – May 2021 … END_OF_DOCUMENT_TOKEN_TO_BE_REPLACED

How to visit Napa Valley on a Budget. In this video Carson and I explain a few ways to enjoy Napa on the cheap. Tip and advice about how to visit Napa … END_OF_DOCUMENT_TOKEN_TO_BE_REPLACED

Home Videos Get To Know Argentina Wine | Wine Folly If you love Malbec, Argentina is your ultimate wine region. But that’s not … END_OF_DOCUMENT_TOKEN_TO_BE_REPLACED