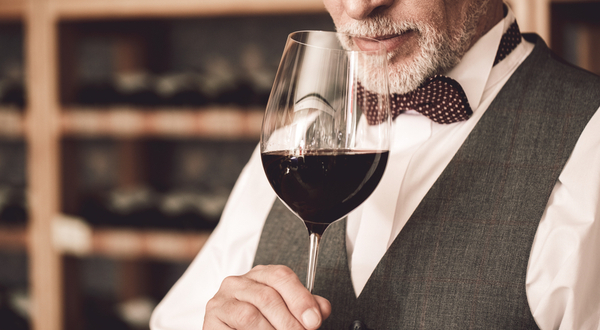 Here we are at Stefano’s in Piedmont, Italy, getting ready to bottle some 400 bottles of Dolcetto, a Nebbiolo grape, from a French barrel of Slovenian oak. Stefano is the guy holding the hose. The entire surrounding area produces the same Nebbiolo variety of grapes, but the wine is named after the hills or towns where it is grown. Four miles north, wine from the Nebbiolo grape is called Barolo, to the North East Barbaresco and here in the town of Dogliani, Dolcetto. Barolo and Barbaresco are the most sought-after wines in Italy but I am very, very happy with Dolcetto, as I find it more approachable, money-wise, it is earthy, easy to drink, easy to love. Stefano’s is particularly good. 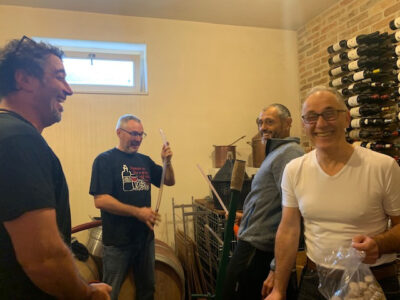 All the wineries here are on the small side, family producers or cooperatives, unlike Tuscany where, since the Middle Ages, the land has remained in the hands of a few aristocratic families with large wineries. Such big producers have to cater to wide tastes, adjust their wine for the market, be crowd-pleasers. Here in Piedmont instead, a great variety of tastes and styles exist within the same area as the producers strive to differentiate themselves from their numerous competitors. Their wines are very opinionated, making strong statements to reflect the originality and sometimes the crankiness of their producers. They are all of excellent quality.

Please note our somber and reflective mood as we approach our heavy chore. Each of us in the picture had a grandfather who did the same thing, possibly with slightly different tools and with less illumination, but the same thing nonetheless. We know how to do this even if we don’t.

Some of my early memories are these family gatherings in Italy at my maternal grandfather’s place, the big house where what is left of my family still lives. Before the big Sunday meal, the men retreated from the women as in all proper family gatherings, and spent time down in the cellar to help my grandfather move casks about, bottle wine, organize stuff. I was allowed to “help” here and there with little chores. I soaked up the general camaraderie of men working together, instinctually happy to be with them.

Naturally, they did some tasting too, a little Cab Franc, a little Merlot, from farms not too far away. New vintages were tried. When the men tasted the wine, an absorbed look swept across their faces like a cloud. A fleeting solemnity entered them, expressed in a slow, content nod. All of these men had fought in either the first or second world war– they had known trouble. They had learned to appreciate the simple pleasures. Comments were offered. Nothing too complex, lengthy or flowery; “a l’e’ bon” (it is good), a whistle, a smacking sound with the lips sufficed.

The women in the kitchen upstairs were far more chatty, remaining studiously away from the cellar, a man space. Nobody had declared this as such; it just happened that way. They drank white wine doing the blessed woman “thing” of weaving and holding the universe together with their rapid-fire all-encompassing talk.

I have often reflected on why men, as they grow old, develop such devotion to red wine. I have found that women do enjoy red wine, but they lean toward white wine more often than not. I waited tables enough to vouch for it. White wine, with few exceptions, does not age well. I never met a woman, except for my cousin Franca, whose interest in red wine matched the visceral passion of men.

I started to witness this devotion first with my grandfathers and uncles. Later, as I matured, I also came to enjoy older wines with an intensity that surprised me. I believe that has something to do with the fact that men are not born but made. We come into this world in a rougher shape than women, more undeveloped. Just like wine, we must be “worked,” knocked down and shaped up a few times to become human. Thus we develop this love for aged red wine because wine must suffer to become the full expression of itself. It has to submit to a lengthy peeling away of fluff, the building of character and so do we. Ours is a love born of affinity and respect for parallel processes.

“What does it take to make a man?” The Griot sings in the African saga of Sunjata. It is a good question. When we drink aged red wine, what we really taste is its becoming, the process that expresses the pregnancy of the must, its gestation in the barrels and the birth in the mouth of the drinker. “Each human being is both physically and mentally pregnant,” says Diotima to Socrates in the Symposium. Each must is pregnant with a promise that has to be read, understood, and worked.

The alchemy starts at fermentation, an inherently mysterious, never-ending transmutation. Wine always becomes, unfolds; its nature slowly revealed, it cannot be rushed. There is nothing fast about wine; it requires time, lots of attention and care. Making wine is good training for lovemaking.

As it releases its subtleties in the deepening of time, wine draws the man out, refines his senses, opens his nose. It makes him a diviner sensing what an extra day of maceration with the skin in the vats will bring. It makes him a prophet, foretelling future flavors and forecasting the resiliency of the wine. Computers and technicians can’t quite do the job yet, almost but not quite. Grandfathers are still better at it, especially when they bring their grandchildren down into the cellar. It will be a sad day when they no longer do it.

Aging wine responds to everything: the weather, temperature, humidity, microbes, spores, bad moods. It absorbs, digests and transmutes. As it ages in complexity, it grows your capacity to understand it. In time, your tongue, your palate, your gums, your teeth ( yes, your teeth) will learn to detect all the struggles of the vine – the length of seasons, the sunlight, the drought, the intentional stresses induced by the farmer. They will live through the tortuosity or straightness of the aging path chosen. The flatness or steepness of the flavors will speak of laziness or hurry. They will savor the obstacles or the sweetness of time spent lingering in the cozy flats of old oak, building strength for the years to come in the bottle.

Fermentation is the process of transmuting grape juice into something else. It is the alchemy of transformation that is so similar to what men experience sitting in the vat cooking in their own hotness. Better yet, it is a transfiguration, not a change in form but a change in essence. So when you come across a good wine, it is like meeting an old friend and recalling the shared adventures and scrapes, knowing full well those events do not define your friend any longer.…

The harder the living, the better the wine, because if you have not been broken, you cannot enjoy it. Only then can you feel the wine reach for and medicate your wounds with layers of velvet, tobacco, berries, chalk, and coal. It is the earth reminding you of the beauty in the soil, of the mud you are made of.

Wine is how a certain area chooses to speak to you, how a certain hill in a certain year sang her song. Drinking her wine is a way to understand that hill. For a moment, you belong to her. She “goes to your head” and you understand what she has been telling you for a long time. For a moment, you resolve the longing; you stop caressing her curves with your eyes, guessing. She is here, yours, dissolving in your mouth. It is intimate. You are tasting Her, Her essence. It is not just a gift. You, the maker of wine, have raised up, learned her language,  fermentation, transmutation, transfiguration. She has taught you, but you have shown up, coming to meet with your labor and skills on this common ground of your palate. Thus Her language is transferred into you: you have learned to speak Patience now. And it is not a language for young men to know. Young men are here to break things.

You must have lost to appreciate wine or anything that has to suffers to become what it is. Young men usually have not lost enough to understand what it takes to become complex, layered with surprises, unpredictable. It is eldership; it is gaining more by losing than by winning. Any great wine awakens you to that somber realization. Young wine has the body and fruit but none of the complexities, no layering. Maturing gives them structure.

The maturing wine must sit with himself for a while, a long while, respond to many stimuli, adapt, “cook,” before revealing itself. It is a slow burn. Just imagine, the beginning of wine is a little fragile berry that would rot and disappear within days, but under the right conditions, can transmute into something that lasts 40 or 50 years. Under the right conditions, the salinity of your being increases with age. The sweetness decreases. Just like red wine, when young, you taste the berry and the sweetness, when old, wood, grief, and if you are lucky and have drunk enough, for a fleeting moment, eternity.

Not all wines can age; not all wines can give you that. Some never had the bones, the structure or the depth for the long run. They lose their fruit fast. They can become sour or worse, insipid. They might just become flat. You can find yourself retired playing golf in Florida or you can become something superbly layered, complex, a cathedral of sensual depth that lingers about you for days, distinct, smooth or full of character and contrasts, even cantankerous and cocky when first opened. As with wine, a man can become an elder or just become old…maybe it’s the soil.

Maturation is a process of loss, loss of freshness and innocence, trading for strength, endurance, and character. You too, need time to separate from the collective nightmare of culture or culture denying culture like Martin Prechtel says… You need time when nothing happens and there is no response from the world, when, in fact, a response from the world would be dangerous. It is a conscious submission to the curing process. Our culture has no understanding or context for such a thing; it is a cultural taboo for we do not know how to sit and compost. I experience this personally as I always feel I missed the bus when the bus is actually me waiting.

Winemaking can teach you that. If you take the wine out of the cask prematurely, when it is not ready, it is really a waste you can taste. It takes time. When you drink aged red wine, you drink time, time and the tears it took to resolve the conflicts that could be resolved, to round the edges of those clashing tannins that could be rounded, and the elegance born out of it–elegance born out of time and grinding. It is the same for men. When you drink good wine, you drink Elegance, Time, and the Suffering it took to get there…men understand this recipe well. “Ah, what does it take to make a man!?”

Home Videos The WORLD of WINE – Wine News. Cheap wine, tasting notes and cooking with wine The World of Wine – May 2021 … END_OF_DOCUMENT_TOKEN_TO_BE_REPLACED

How to visit Napa Valley on a Budget. In this video Carson and I explain a few ways to enjoy Napa on the cheap. Tip and advice about how to visit Napa … END_OF_DOCUMENT_TOKEN_TO_BE_REPLACED

Home Videos Get To Know Argentina Wine | Wine Folly If you love Malbec, Argentina is your ultimate wine region. But that’s not … END_OF_DOCUMENT_TOKEN_TO_BE_REPLACED