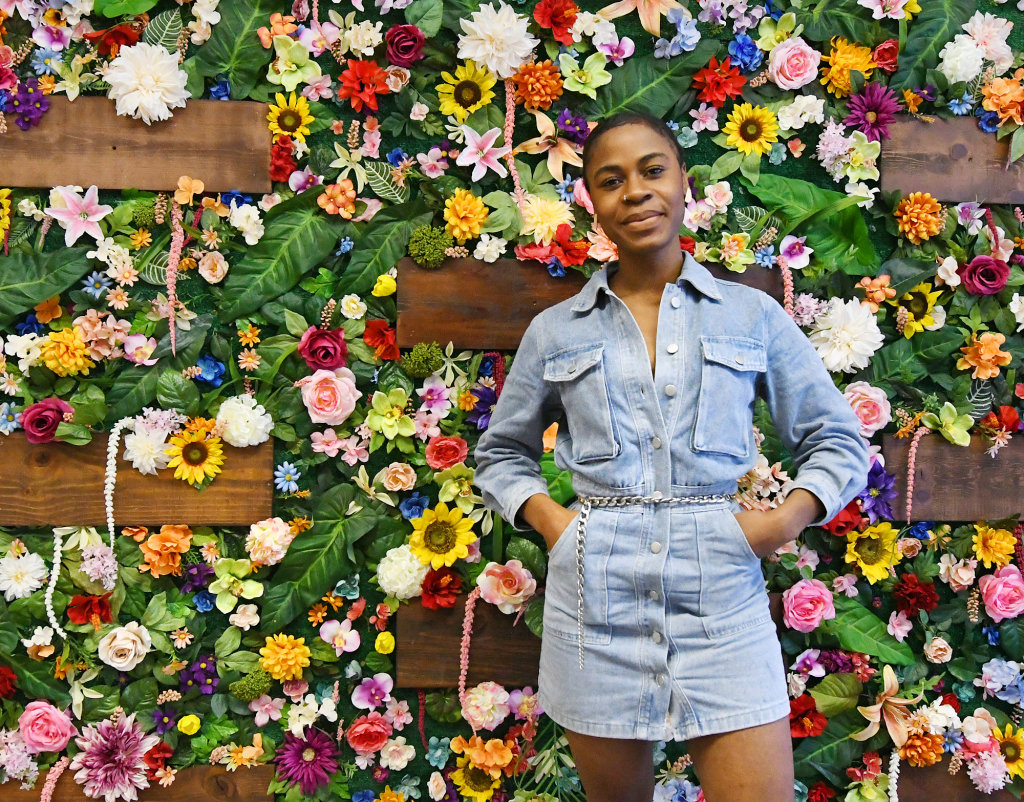 We all know that Vallejo is a special place full of special people — those who are dedicated to lifting it up and celebrating the community. But for some, it’s an uphill battle, especially for merchants downtown, both pre- and post-pandemic.

Maa-Becca Tucker is young, driven, creative, and determined to help the city reach its full potential.

“I don’t care what anyone says, I love Vallejo and think it has so much potential,” says the 26-year-old. “It hurts my heart when people leave and go to Vacaville and open businesses. There’s so many empty spaces here. Georgia Street in general — so many empty spaces!”

At the beginning of last year, Tucker was poised to begin her dream of owning a boutique that was also a hub for creativity and self-care. COVID-19 slowed her down a bit, but when she announced the soft opening of her shop, “/es’thedik/” (pronounced “aesthetic”) on Instagram in July, it went viral. So many people in Vallejo were ready for what she had to offer.

“People are bored,” she says of her peers. “There’s nowhere for us to go. I have a whole refurbishment plan for Vallejo!

Tucker has an easy laugh and an exciting energy. Originally from Liberia, she came to Vallejo as a young child and went to school here. She admires area contemporaries like singer H.E.R., Hip Hop group SOBxRBE, and ex-NFL running back C.J. Anderson, and she wants to bring her experience and expertise with fashion to the table in Vallejo to add to our creative pool.

Her store at 523 Capitol St. is adorable, with a gorgeous wall of flowers and elegant touches here and there. Her clothing is all locally sourced and includes cute jump-dresses, blouses, mini-skirts, jackets, and handbags.

The store is suffused with rose and gold accents that are also reflected in much of the clothing. She also has an aesthetician on site– Imani Mills — and she hosts “experiences,” such as yoga classes, poetry readings, and musician performances.

“The idea all along was for this place to be ‘Instagrammable.’ There’s different scenes within the store. You walk off the street and into a new world,” she says.

Everything in the store is DIY, from a found chrome and glass coffee table with a Deco vibe to the mannequins that she bought and painted various shades of brown, to represent women of color.

When asked who her customer is, she replies, “She’s whoever she wants to be. I’m whoever I want to be. We’re not a monolith.”

Her fashion journey began as a child designing her Halloween costumes with her Godmother, creating patterns, and then sewing them. From there she studied at the Academy of Art and worked in fashion retail, everything from menswear to lingerie.

Tucker knew not to expect foot traffic. The closest community is a hotel converted into an assisted living center. But she was willing to be patient and had big plans for the remainder of this year.

“I knew the vibe I was going for and the message was there, I just didn’t have the clientele.”

But when a woman came in, looked around, and announced that she was vying to take over the lease when it was up in April, Tucker’s heart sank. She also felt that the owner was ready to see her go, too.

Now she looks forward to carrying on online and she is scoping out places to have pop-up experiences. But even that is hard to nail down. She hasn’t gotten response from people who own the empty storefronts along Georgia, if she can even figure out who they are.

Though determined and optimistic, Tucker broke down a bit when she looked back over her journey to get her shop going.

“I put everything into this store to keep it alive,” she said. “Job, car, phone… my car got repo-ed. I want people to see my story and see where I came from…oh my God… to see that it’s possible…” And with that she wipes her eyes.

But she IS a success. Only in her mid-20s, she has the attitude, brains and ideas to make her mark in Vallejo. It’s not over.

“It’s like I have to allow myself to hurt,” she says. “It hurts and I have to accept that it’s going to hurt.”

Tucker will continue to connect with other creative movers in town. In fact, she says that by going for it and opening up her own store, a few friends have followed her cue and have started their own ventures.

Next up for her, besides working on her online presence, is finding another space to host her experiences and maybe even start an e-cafe.

Folks that are interested in visiting her shop through March might want to start with the tea time she is hosting on Sunday, March 7 at noon. There will be a tea expert from Benicia and Tucker will also present a few infusions she has created herself.

“It’s like a wine tasting, but for tea,” she says, inviting people to dress in their best high tea attire.

/es’thedik/ is open noon to 5 p.m., Thursday through Sunday. It is located at 523 Capitol Street in Vallejo.

Home Videos The WORLD of WINE – Wine News. Cheap wine, tasting notes and cooking with wine The World of Wine – May 2021 … END_OF_DOCUMENT_TOKEN_TO_BE_REPLACED

How to visit Napa Valley on a Budget. In this video Carson and I explain a few ways to enjoy Napa on the cheap. Tip and advice about how to visit Napa … END_OF_DOCUMENT_TOKEN_TO_BE_REPLACED

Home Videos Get To Know Argentina Wine | Wine Folly If you love Malbec, Argentina is your ultimate wine region. But that’s not … END_OF_DOCUMENT_TOKEN_TO_BE_REPLACED