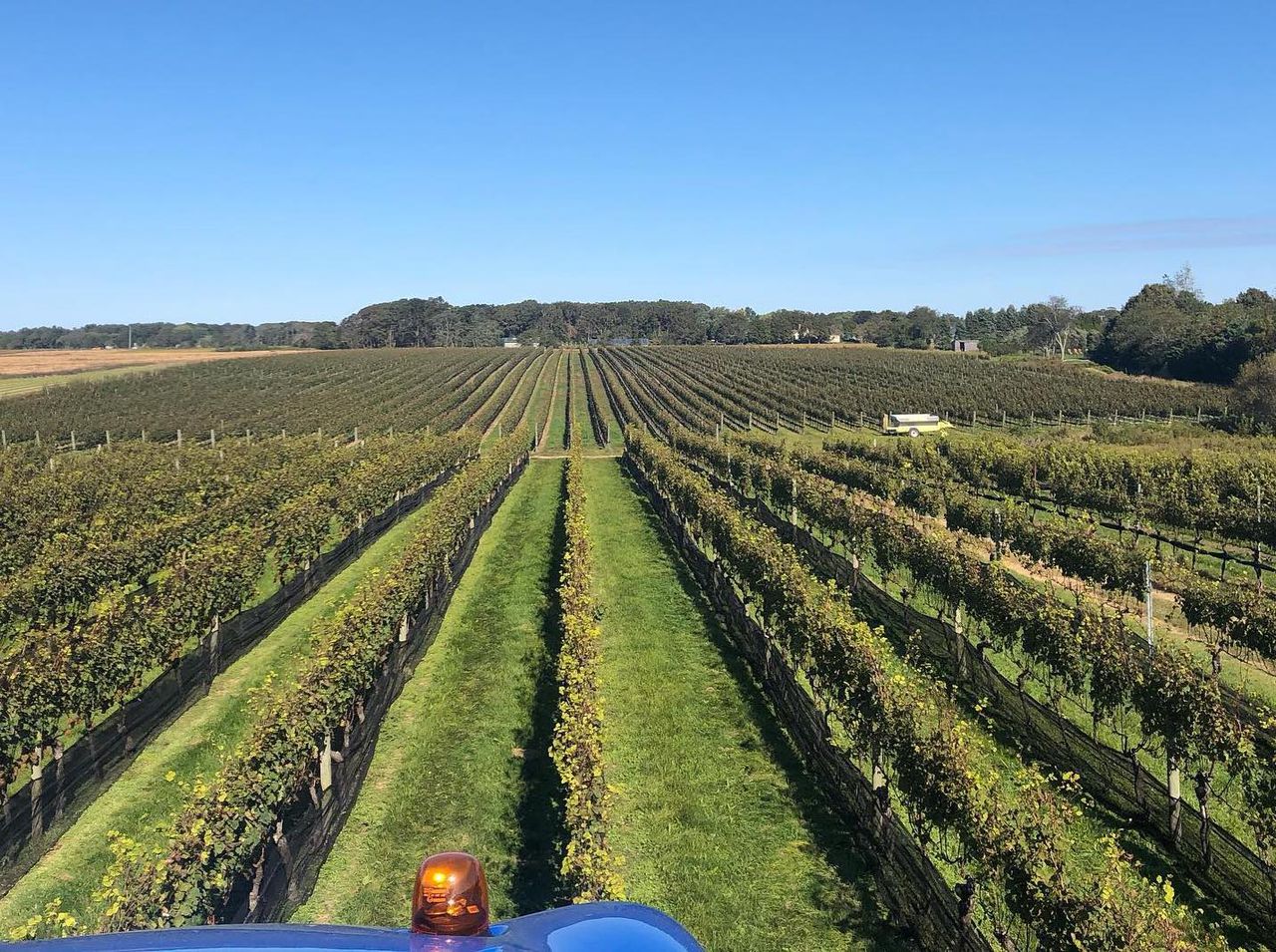 Paumanok Vineyards has been a Long Island fixture since 1983 when Ursula and Charles Massoud and their three sons brought their “Old World” values and love of wine to a part of the country that was just beginning to realize the potential that terroir offering fro producers.

It is a success story that continues to this day, making Paumanok one of the must-see destinations on Long Island for those who love wine.

Indeed, the winery last month was recognized for the third time as New York State’s “Winery of the Year” by the judges at the annual state Wine Classic competition. It won gold medals in Best Vinifera Red Blend for its 2015 Assemblage, in Best Traditional Method Sparkling Wine for its 2016 Blanc de Blancs and in Best Sauvignon Blanc for its 2019 Sauvignon Blanc.

Its Long Island neighbor, Pindar Vineyards of Peconic, won the Governor’s Cup for its 2019 Dr. Dan’s Signature Collection, Gewurztraminer. Both are among the oldest wineries on the island and still run by the founding families, according to a story on riverheadloca.com.

These days, the three young boys who were getting a taste of the business in the 1980s are now running the operation. Nabeel Massoud manages the vineyard, Kareem Massoud is the winemaker and Salim Massoud is the administrative manager — “the unsung hero who makes everything happen behind the scenes,” Kareem Massoud told the website.

The winery runs out of a renovated turn-of-the-century barn that houses a fermentation tank room and lab. The spacious tasting room was built on top of the barrel cellar, and It’sssurrounded by a large deck overlooking the vineyards. Amid the daily visits by those wanting to taste and experience the wines and winery are various private parties and events.

Kareem Massoud also represented the winery at the first East Coast winemakers summit in April 2017 at Waltz Vineyards Estate Winery in Lancaster County. You can read those stories at the links embedded below.

Recent stories that have been written on Paumanok include this one by New York-based writer and blogger (of The Cork Report) Lenn Thompson on Long Island’s “12 essential wines” and this one that appeared on northforker.com on the three Massoud sons.

Below is the latest in the “6 Questions” series of interviews with winemakers and owners of East Coast wineries, which looks behind at what has been a turbulent year and, with optimism, looks ahead. Thanks to. Kareem Massoud for taking these on.

Q, “Winery of the Year” congrats. Has the winery won that before? That’s a nice validation for all the work you and everyone at the winery have put in, and you already had the bar raised high which just leads me to ask what it has been like to run a winery during the past 13 months?

A, Yes, this was our third “Winery of the Year” win. We won twice before, in 2004 and 2015. The last 13 months have been intense. We quickly realized at the beginning of it all we were being handed lemons in terms of the 2020 business climate and we had to figure out to make lemonade — fast. We started offering weekly flash sales with deep discounts on cases of wine. Our customers were very supportive and this campaign which we call “Vinous Antivirus” continues to this day. As we reopened in late June, we saw some of the highest volumes of visitor traffic we have ever seen. We were blessed with beautiful weather so we were able to accommodate visitors with outdoor seating throughout the season. Unfortunately, we had to turn away many customers as there was a limit to what we could handle while responsibly maintaining all the necessary COVID protocols.

Q, Tell me about the Assemblage what led to it being created, how long have you made it, has it evolved at all?

A, Assemblage was first created by my father, Charles Massoud, from the 1993 vintage. My father first produced Paumanok wines from the 1990 vintage. ’90, ’91 and ’92 were all more or less of similar quality. However, 1993 was clearly a superior vintage. He decided to create a new range of wines called “Grand Vintage.” We declare the vintage to be a “Grand Vintage.” We only do this in our finest vintages. In such a year, the Grand Vintage blend – Assemblage – is produced. My father speaks fluent French. He recalled that Assemblage is the word the French use for blend and he decided to use this name for our proprietary red blend.

Q, How well did the vines survive the winter and do you have plans to plant any vines either this spring or next?

A, It is still a little to early to tell, but this winter did not see extreme low temperatures, which is always our biggest concern over the winter. We are not planting this spring. However, over the last three years we have planted about 21 acres including more Chenin, Sauvignon Blanc, Merlot, Cabernet Franc, Cabernet Sauvignon as well as new varieties for Paumanok: Albariño, Malbec, Melon de Bourgogne and Pinot Noir.

Q, Was looking back at my notes and saw this one: “For the first time in its history, Paumanok has bottled a wine without the addition of sulfites. That wine is the 2015 minimalist Cabernet Sauvignon.” How much has that process expanded to other wines you make?

A, As the majority of our wines are sealed with a screw cap, they do not require the same amount of sulfites as cork-finished wines. So, all of our wines are relatively low in sulfites. However, we have only produced a handful with no sulfites added.

Q, How much are you planning ahead in terms of welcoming guests to the winery with so much still in flux, and have you made any adaptations over the past year that you think will remain even after the pandemic fades?

A, We reopened to the public late last June – with all COVID protocols in place – and transitioned to a table service model, more similar to a restaurant experience. It has gone very well and we intend to continue to develop our hospitality experience. Our goal is to produce outstanding wines and for our guests to leave the winery with fond memories of their visit.

6, Saw the sparkling was recognized. Talk about the history of your sparkling program there … do you make several?

A, It seems to be something that more and more wineries are trying their hand at. Our first vintage of our traditional method Blanc de Blancs was the 2009, released in 2013, for our 30th anniversary. We have produced one every year since. It is made entirely from our own fruit, which is 100% Chardonnay. The base wine is made at Paumanok and then transferred to Lenz Winery for the bottling and all the traditional method work. This arrangement has worked well and we are very pleased with the results. In general, it seems like demand for bubbly is on the rise.

ALSO READ: At Va La Vineyards, the best news amid the pandemic is that ‘the vines are ready to break bud soon’

ALSO READ: Wolffer Estate’s Summer In A Bottle is one of four rosés ‘all made with love’ but ‘distinctly different’

Home Videos The WORLD of WINE – Wine News. Cheap wine, tasting notes and cooking with wine The World of Wine – May 2021 … END_OF_DOCUMENT_TOKEN_TO_BE_REPLACED

How to visit Napa Valley on a Budget. In this video Carson and I explain a few ways to enjoy Napa on the cheap. Tip and advice about how to visit Napa … END_OF_DOCUMENT_TOKEN_TO_BE_REPLACED

Home Videos Get To Know Argentina Wine | Wine Folly If you love Malbec, Argentina is your ultimate wine region. But that’s not … END_OF_DOCUMENT_TOKEN_TO_BE_REPLACED