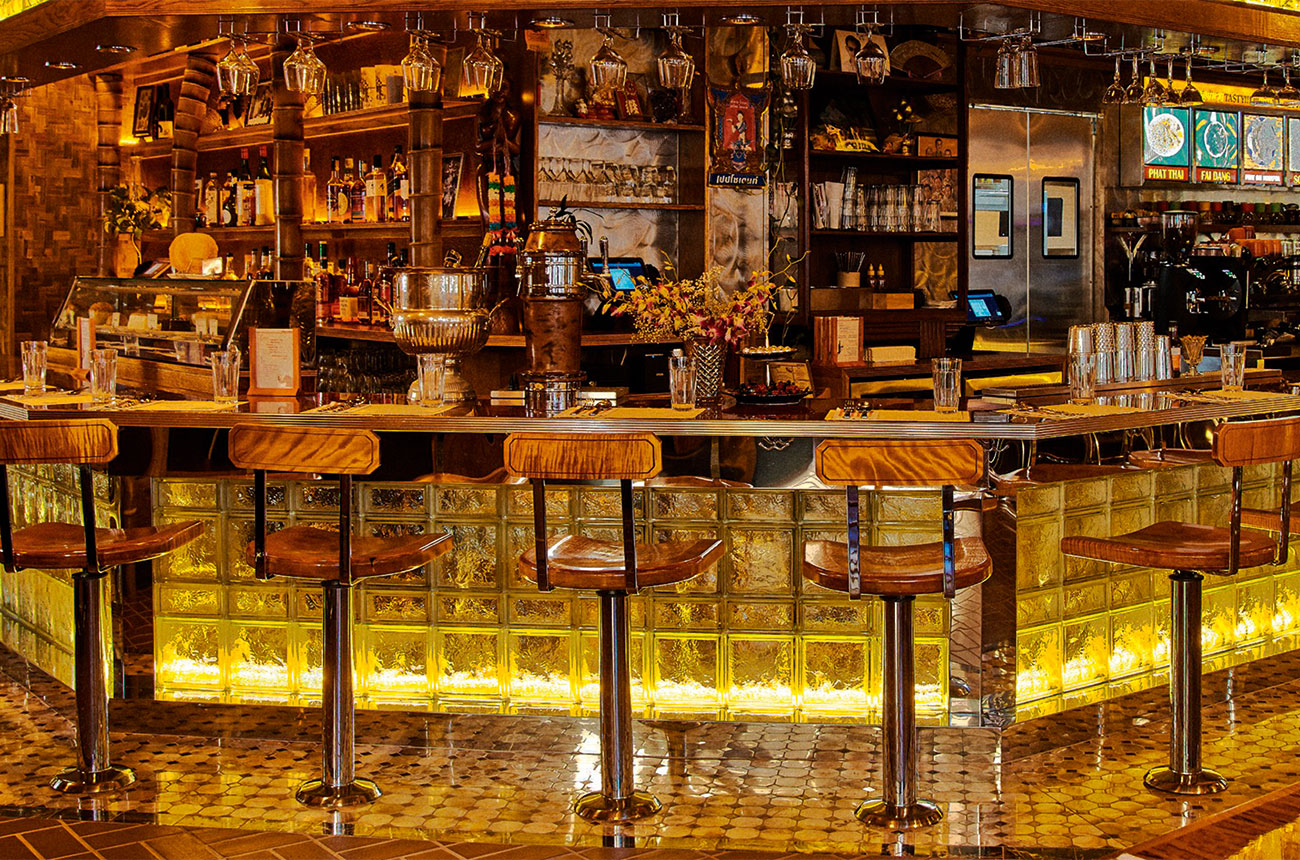 Restaurants in New York are allowed to open for indoor dining again, however measures are in place to prevent the spread of Covid 19, such as only 50% capacity and temperature checks. Be sure to check with the venues rules and opening hours before visiting.

New York City is home to one of the greatest wine scenes in the world. No matter where you are in the Big Apple, an extensive and globally curated wine list is never more than a few steps away. New York dwellers and short-term visitors alike love to drink wine, and from swanky rooftop bars to classic New York steakhouses to quaint backyard garden bars in Brooklyn, finding a venue that matches your mood is not a difficult feat. Simply put, if you want to drink a knock-out wine, New York has just the place for you to do so.

In a city with such a robust wine culture, things are constantly changing. But thankfully, when it comes to the classics, some things stay the same – including Bordeaux’s presence in the city’s wine-drinking repertoire. Trends and regions may come and go, but Bordeaux is a constant. From first- growth favourites and legendary vintages to natural and low-intervention bottlings from Bordeaux’s newest up-and-coming winemakers, New York City has it all – and its world-class sommeliers are ready to fill your glass with whatever takes your fancy.

For the best Bordeaux selections that New York has to offer, look no further than these 10 wine bars and retail shops.

For classic French cuisine served alongside a comprehensive Bordeaux selection, check out Le Coucou. This fine French dining establishment sits in the heart of New York’s bustling SoHo neighbourhood and is the brainchild of restaurateur Stephen Starr and chef Daniel Rose. Traditional bistro favourites are redone with a breath of fresh air and served in an ambience of classicism-meets-modernity. Le Coucou’s Bordeaux selection ranges from an extensive list of classics to lesser-known hidden gems, some of which run for less than $100 a bottle. Though if you’re looking to drop a solid $4,000-plus on a 2000 vitnage Château Lafite Rothschild, the option’s also there. For a modern and all-encompassing take on Bordeaux wine served in a lofty and sophisticated atmosphere, this refined restaurant should be top of the list.

Bordeaux for the natural wine enthusiast

Not all Bordeaux screams tradition, and what better place to go for a modern take on regional vinification than Brooklyn’s Williamsburg neighbourhood? Tucked inside the Wythe Hotel, this friendly brasserie (pictured top) founded by chefs Jake Leiber and Aidan O’Neal (both formerly of Chez Ma Tante) with restaurateur Jon Neidich is best known for its traditional French fare and whimsical by-the- glass selection. Expect hearty bistro favourites (such as steak au poivre and roast chicken with herb jus and fries, to name but two) paired with unconventional wine pours from France’s classic regions. Le Crocodile is currently serving Clos Puy Arnaud’s La Cuvée Bistrot by the glass, as well as 15 more reds by the bottle (Château Beychevelle, St-Julien 1976 will set you back just $240). Classic French dining with a Brooklyn twist? Count us in.

Looking to drink big, literally? This unpretentious Brooklyn-based bistro, located in the city’s quaint and cosy Boerum Hill neighbourhood, offers a selection of organic, sustainable and biodynamic Bordeaux wines, many of which come in large-format bottles. For big groups seeking out the joys of Bordeaux magnums, jeroboams and more, paired with French onion soup, moules marinière, braised lamb shanks, or other French favourites, Bacchus’ back garden provides the perfect ambience for sipping and savouring. The wine bar even features a special cave cachée (hidden cave) for imbibers searching to splurge on rare pours of Pétrus, Château d’Yquem and other legendary Bordeaux greats.

When Brunello or Barolo simply won’t do the trick, a rich yet restrained red from Bordeaux should fit the bill. Tucked away on New York’s wealthy Upper East Side, Italian restaurant Casa Lever is home to one of the city’s best Bordeaux lists in a non-French restaurant setting. The signature meat-heavy pasta sauces, simply cooked manzo (beef) and ossobuco alla Milanese are simply delightful when matched with a robust Bordeaux from the cellar’s extensive list. Modestly priced bottles start at just $95, including wines from Châteaux Lagrange in St-Julien and Ormes de Pez, St-Estèphe, and there are plenty of pricier offerings to be found, such as Châteaux La Conseillante and Petrus from Pomerol. For chic Italian dining with a French twist, grab a cab uptown and make it a Park Avenue affair.

Have your Bordeaux (and take it home)

Opened in 1947, this long-standing wine bar/wine shop hybrid is located in the heart of midtown Manhattan and has an ample amount Casa Lever Morrell Wine Bar

of Bordeaux references for consuming both on or off the premises. Whether a by-the-glass pour, half-bottle or more strikes your mood, sip it here against the backdrop of New York’s famed Rockefeller Plaza. Classic Mediterranean-inspired small plates, charcuterie boards, caviar and oysters are just a few of the many food selections available on the all-day menu. The bar pours seven red Bordeaux selections, including Château Latour’s Pauillac de Latour 2012, as well as lesser-known Haut-Médoc options and more by the glass, ranging from $18-$55 per pour. For those looking to continue imbibing past on-premise hours, the bar’s iconic wine shop has plenty of bottles to go.

Should you want to drink old-school Bordeaux in a quintessential New York setting, The Grill is just the ticket. Situated in the luxurious location of the former Four Seasons restaurant, The Grill is aiming to build the largest and most diverse wine list in all of New York City, and its Bordeaux section is no exception. For those seeking to drink legendary vintages from iconic producers alongside elevated cuisine, this award-winning list is a great place to start. Best of all, The Grill offers nearly 50 classic red Bordeaux selections by the half-bottle, perfect for those looking to dabble in a variety of producers (Châteaux Latour, Lynch-Bages and Margaux occupy almost 20% of this selection).

This unpretentious, Tribeca-based wine bar is the brainchild of Paul Grieco, one of New York’s most legendary sommeliers. After working in some of the city’s most high-profile restaurants, Grieco opened this low-key wine bar with the intention of bringing laid-back wine drinking and education to the people of New York. Grieco offers one of the city’s largest by-the-glass selections, featuring a slew of Bordeaux options at any given moment. Terroir is also known for its curated wine flights, which frequently come equipped with maps and visual collateral. If you’re looking to educate yourself on Bordeaux’s best in an informal environment, then this brick-lined gem is just the place.

This newly opened restaurant in Manhattan’s up-and-coming Hudson Yards neighbourhood is ideal for those who want to sip Bordeaux alongside classic Korean favourites. Momofuku Kāwi’s beverage director, Isabella Fitzgerald, cleverly integrates the first growths alongside inexpensive by-the-glass picks, ensuring that every client’s ideal price point is met. Although highly underrated, the restaurant’s white Bordeaux selection (there’s good choice by the bottle) and Asian-influenced seafood dishes, as well as Cabernet-dominant reds and Korean steakhouse staples, make for some of the best unconventional food-and-wine matches in the city. For those looking for something off the beaten path, snag a bottle of Amélie Constant’s Crémant de Bordeaux (a Merlot-Cabernet Franc blend) for just $62 a bottle to start your meal on a high note.

In the realm of Bordeaux retail, Millesima is undoubtedly New York City’s authority. Founded in 1983, the company proudly boasts 2.5 million bottles in its cellar, with a strong emphasis on Bordeaux past, present and ‘futures’; indeed, it has become synonymous with selling futures. For collectors looking to stock their personal cellars at the hands of bona-fide Bordeaux experts, seeking service from Millesima’s highly qualified staff guarantees customised top-notch service. However, this Upper East Side store front isn’t just for cellar holders. Crisp whites from Entre- deux-Mers can be found for as little as $12.99, and there are plenty of juicy cru bourgeois reds below the $20 price point. For the city’s best selection of off-premise Bordeaux, there’s really no better place to shop.

This West Village institution boasts American comfort food, a sizeable Bordeaux list and a brilliant back garden perfect for indulging in both. Waverly’s wine director Jeff Harding has a passion for Bordeaux and its wines, particularly the sweet selections from Sauternes. ‘I carry Bordeaux because we are a fairly old New York classic restaurant and we aim for a similar style wine list,’ he says. ‘As many sommeliers have gone exploring wild and wonderful places, I’ve doubled down on the classics and it has been very rewarding.’ Harding also emphasises Bordeaux’s underrated food-friendliness with vegetarian cuisine through regularly scheduled special events and dinners. With more than 100 references on its list, Waverly Inn’s quaint and cosy ambience makes it the ultimate place to drink away from the bustle of downtown Manhattan.

Best Bordeaux wine lists in the US

Home Videos The WORLD of WINE – Wine News. Cheap wine, tasting notes and cooking with wine The World of Wine – May 2021 … END_OF_DOCUMENT_TOKEN_TO_BE_REPLACED

How to visit Napa Valley on a Budget. In this video Carson and I explain a few ways to enjoy Napa on the cheap. Tip and advice about how to visit Napa … END_OF_DOCUMENT_TOKEN_TO_BE_REPLACED

Home Videos Get To Know Argentina Wine | Wine Folly If you love Malbec, Argentina is your ultimate wine region. But that’s not … END_OF_DOCUMENT_TOKEN_TO_BE_REPLACED