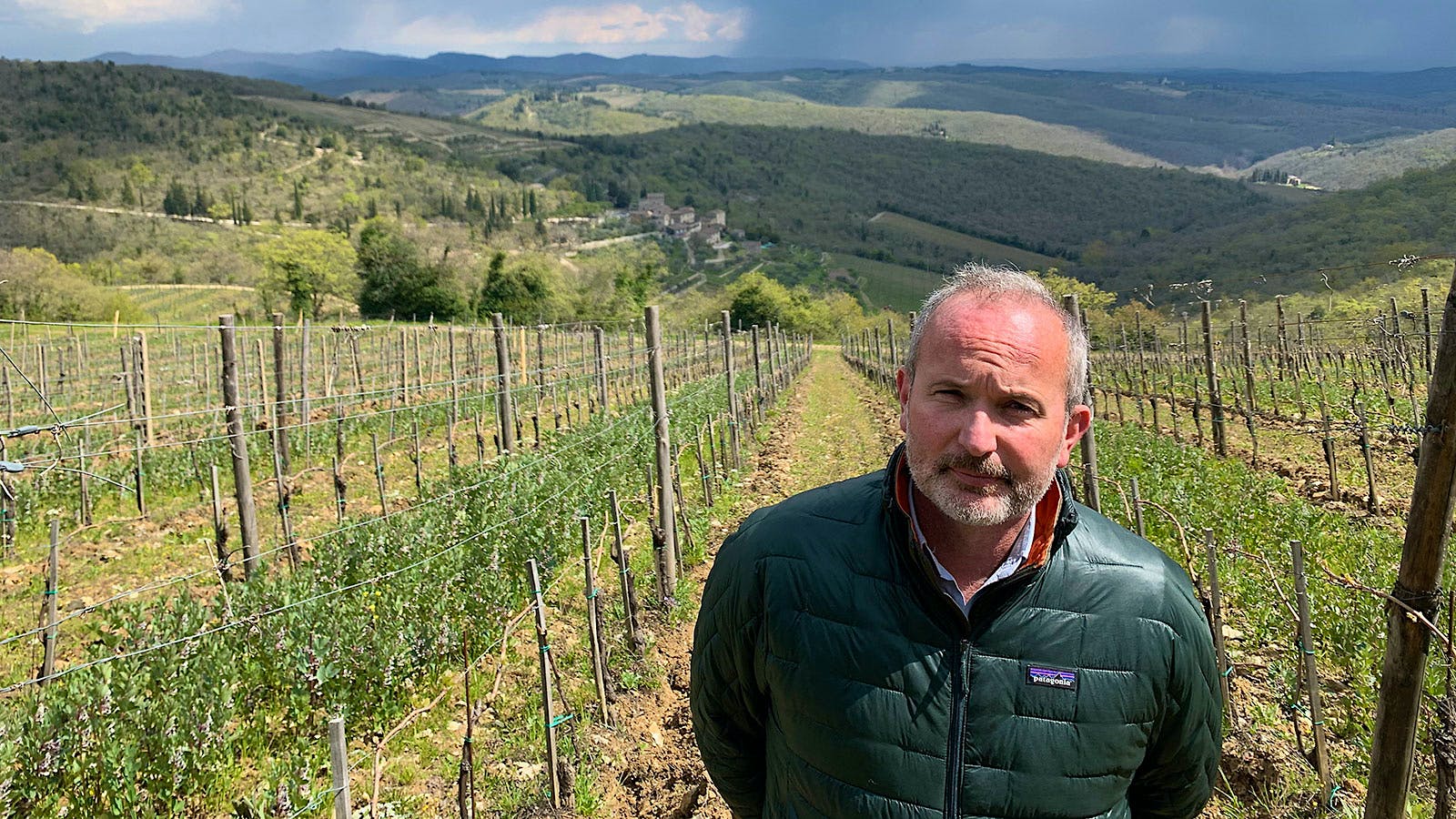 One of the most beautiful things about wine and viticulture is their ability to transform the lives of people—including young rebels without a cause.

For the second time in the past year, I interviewed an acclaimed Italian winemaker who came to love his familial terroir the hard way. For Michele Braganti, this came years after being exiled at age 24 to his family’s vast, wild Tuscan estate in Radda in Chianti.

“I am from Florence. To me, the idea of working in the countryside was not something pleasant,” says Braganti, walking along the crest of a steep vineyard above the secluded medieval village of Monteraponi. “My mother sent me here as a punishment.”

There is no winking sense of irony when he tells his story. Green-eyed, with a salt-and-pepper–flecked beard, Braganti today is methodical, hardworking, perfectionistic and stoic.

The recent success of Braganti, the youngest son of famed Florence silversmith Antonio Braganti, has been a surprise—even to his family. He is now known for producing highly noted Chianti Classico: Monteraponi’s 2015 and 2016 vintages, the most recent reviewed in Wine Spectator blind tastings, produced four wines scoring 90 points or higher, topped by his 2016 Chianti Classico Il Campitello Riserva (95 points, $78).

It’s been a long journey. Back in 1998, his parents were understandably frustrated with his lack of ambition and drive: During six years at a university, from which he failed to receive a diploma, he had done everything but study.

His banishment to the countryside followed.

Michele’s father had purchased Monteraponi, an abandoned 1,000-year-old village surrounded by about 500 mostly forested acres, in 1974. Antonio began repairing the ancient farmstead and cellars and dreamed of creating a wine domaine. Local workers cultivated about 12 acres of vineyards that produced wine for his clients and friends in Florence.

But after the 1986 scandal in which methanol-spiked Italian wines killed 22 people, causing sales to tank, Antonio abandoned his wine dreams and let his vineyards out free to a local grower. “In the latter part of the eighties, water sold for more than wine,” Michele recounts. “My dad said, ‘Monteraponi is finished.’”

For several years, the exiled Michele worked with a single employee, cultivating the vineyards and selling the harvest while working to complete his degree in political science. “I never used a thing I learned at university,” he says with a dismissive shrug.

Around the time of his graduation in 2002, Michele began to think about making wine. He already enjoyed drinking it, and found inspiration in Italian industrialist Sergio Manetti’s Montevertine estate and its cult red, Le Pergole Torte. The wine, classified as a Toscana IGT, was the first from Radda made entirely from Sangiovese—long before the 1996 changes in the appellation’s regulations allowed such single-variety wines.

“My idea was to make a Chianti Classico that, whether you drank it in New York or Sydney, you would recognize as a wine from Radda,” Michele says.

His father said that Monteraponi would never make money. Michele worked to prove him wrong. For years he borrowed money from his father, which he has paid back almost entirely.

At first, he hired an energetic and talented contemporary, Daniele Rosselini, a specialist in organic and biodynamic viticulture who was constructing his own estate, Campinuovi, from abandoned hillside vineyards in southern Tuscany’s Maremma region.

From the 2003 vintage, Braganti learned as he went, diving into cultivating vineyards and planting new ones—expanding vineyard acreage from about 12 acres to more than 30, laid out in a natural amphitheater of slopes that climb from about 1,370 feet in elevation to 1,870 feet.

In the winery, built into a series of centuries-old stables, he draws from great traditions of elegant winemaking, making fastidious selections of grapes, relying on native yeasts and conducting gentle vinifications in unlined cement vats with no temperature controls. (“I don’t believe in steel,” he says. “I hate it.”) He ages his wines in an assortment of large oak casks from Austria and Burgundy.

Michele Breganti is using a 1,000-liter cask to age a new single-vineyard bottling from the 2019 vintage. (Robert Camuto)

“I adore Burgundy and certain Piedmont wines; these are the kind of wines I want to make,” Braganti says, leading me through the cellars that afternoon. “Sangiovese is like Pinot Noir and Nebbiolo, a vine that translates in the glass what happened that year—the good and the bad.”

Monteraponi wines are fine examples of the Radda style: tightly acidic, often floral, mineral-laced and elegant. “From here,” Braganti says of Monteraponi, “you can’t make wines with a lot of color, alcohol or structure.”

Braganti continues to try to push Monteraponi wines up the quality pyramid. From a 1.5-acre plot he planted in 2015, he has vinified his first pure Sangiovese. The debut vintage, 2019, is now aging in a single 1,000-liter Burgundy cask, for release in 2023. Resting his hand on that cask, he says he has no idea what it will be called or how it will be classified.

When asked how the indifferent youth turned into an exacting producer, Braganti turns philosophical.

“The greatest loves don’t come all at once,” he says emphatically. “They are born poca a poca (little by little) over time.”

Home Videos The WORLD of WINE – Wine News. Cheap wine, tasting notes and cooking with wine The World of Wine – May 2021 … END_OF_DOCUMENT_TOKEN_TO_BE_REPLACED

How to visit Napa Valley on a Budget. In this video Carson and I explain a few ways to enjoy Napa on the cheap. Tip and advice about how to visit Napa … END_OF_DOCUMENT_TOKEN_TO_BE_REPLACED

Home Videos Get To Know Argentina Wine | Wine Folly If you love Malbec, Argentina is your ultimate wine region. But that’s not … END_OF_DOCUMENT_TOKEN_TO_BE_REPLACED