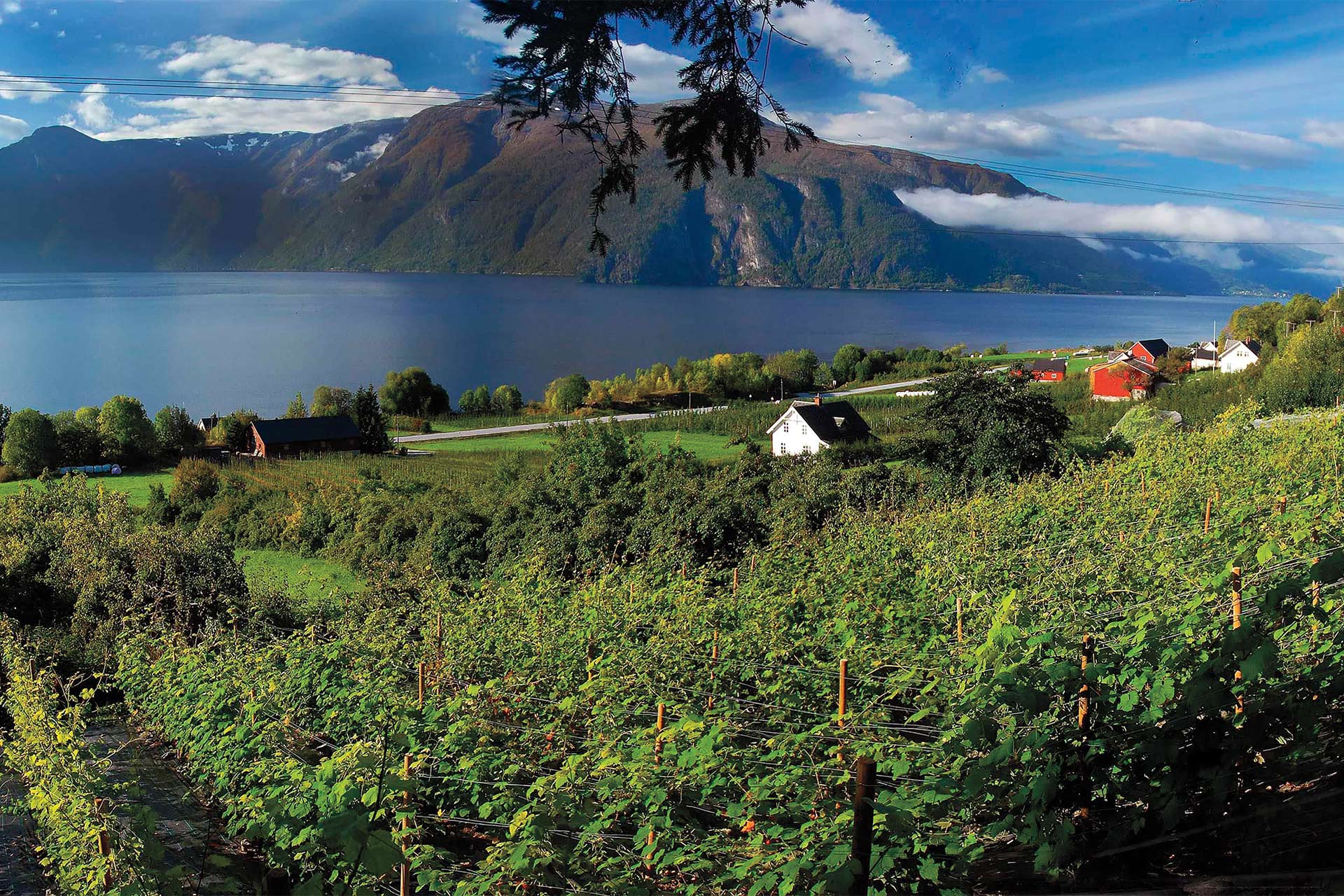 Five years ago, Klaus Peter Keller led a tasting of his Spatbürgunder, or Pinot Noir, from Germany. He was showing off how the cold climate created beautiful expressions of the variety and, at some point, made an offhand comment that stood out long after the fact.

“I planted a vineyard in Norway.”

Fast-forward to today, and Keller’s vines there have yielded several vintages of Riesling. Wines from Norway, along with those from Japan, Bolivia and ever-growing swathes of British Columbia, Canada, testify to transition afoot. As the climate changes, so does the number of winegrowing areas. These four regions represent new frontiers of viticulture and, in many ways, prove that the future is now.

On a south-facing granitic site that overlooks the North Sea, Keller and his Norwegian former apprentice, Anne Enggrav, planted Riesling on her family’s land.

When Keller and Enggrav planted the vineyard back in 2008, locals had already been dabbling in viticulture for 20 years, mostly as hobbyists. As the climate has warmed and domestic wine appreciation has grown, commercial aspirations have taken root.

While no one region has yet earned European Union designation, two areas have emerged as contenders. Østlandet, located in southeast Norway, encompasses Oslo and holds about half of the country’s population. Vestlandet, along the fjords of the west coast, boasts the picturesque town of Bergen.

The sum of a given site’s unique characteristics is what makes viticulture possible, says Danilo Costamagna. Originally from Piedmont, Italy, he moved to Norway, where he founded NorskVin winery and now leads Norske Druedyrkere Foreningen, the Norwegian growers association.

“The fjords reflect sunlight back on the vineyards,” he says. “The mountains accumulate heat and provide good drainage, since Norway gets a lot of rain.”

“For some vineyards, we have the problem of too much vigor,” says Costamagna.

Growers are finding balance by slowing ripening down without missing the picking window. That’s not to say that grapes consistently hit ideal Brix levels, though. Chaptalization, or adding sugar to increase alcohol levels, has been a well-worn tool for years.

Though Keller’s Riesling project demonstrates potential, the grape showing ripeness and consistency now is Solaris, one that few Americans know.

Capable of 12.5% alcohol by volume (abv) with natural sugars, this dry white wine ranges from light to medium body. It offers Riesling-like acidity and flavors of lemon, green apple, watermelon and grapefruit.

Why Solaris? It ripens early, and it resists fungal diseases and frost, two foils fostered by Norway’s wet, cold conditions.

For reds, the hybrid Rondo appeals to some vintners. Bred in what was then Czechoslovakia, this rustic, thick-skinned grape is a crossing of Saint-Laurent and Zarya Severa. It also grows in Germany’s Rheinhessen region, as well as Denmark, England, Ireland and Sweden.

Despite the climate, planting traditional varieties of Vitis vinifera for the vineyard of the future makes sense.

“Vintage 2018 in Norway tastes a bit like Germany in the ’60s,” says Keller. “Very pure, very pronounced acidity, very soil-driven, with a lot of energy. A joy to drink.”

Bolivian viticulture dates to the 16th century, when Spanish colonizers planted Negra Criolla and Moscatel of Alexandria. They used wealth from silver, mined in nearby Potosí, to fund the production of wine and singani, a spirit distilled from Muscat grapes.

The more recent story, however, has been one of political disturbances, poverty and class division under which the industry has struggled to grow. That may be changing.

“Bolivian wine is doing better than ever…maybe it is due to the growth of wine culture and wine consumers,” says Bertil Levin Tøttenborg, sommelier for Gustu restaurant in La Paz.

Established in 2012 by Claus Meyer, cofounder of Copenhagen restaurant Noma, Gustu creates modern cuisine from local ingredients. These are paired with local wines, of which Tøttenborg tasted most, if not all.

“One thousand people would be lifted out of poverty in Bolivia if we sold less than 3% of what Robert Mondavi sells in a year.”—Ramon Escobar

A proponent of minimal-intervention wines, he points to smaller regions like Valle de Cinti where producers “do what they do best: high-level, unfiltered, focused natural wines,” he says.

Cees van Casteren, MW, called Cinti Valley’s wine industry “viticultural archaeology” for its ancestral vineyards. Some have vines that are as big as trees, while others are trellised on trees in a method known as arboreal viticulture.

To capture the distinct taste of these dwindling heritage vines, one must first get to Cinti Valley. Though only 50 miles west of the city of Tarija, mountain roads demand three hours of careful driving.

Nayan Gowda of Vinosity Consulting says that organic farming practices here are often a function of cost to the difficulty in sourcing equipment.

Adjacent to Cinti is the larger wine region of Tarija, which boasts established producers with sizeable distribution.

These high-elevation sites guard against warming temperatures, but other issues exist.

Ramon Escobar, founder of Chufly Imports, watched as domestic sales dropped by 85% during the first few months of 2020, further complicated by social and political instability.

“Our vineyards are more dependent than ever on the U.S. market for their survival,” he says. Chufly represents brands like award-winning Aranjuez, historic Bodegas y Viñedos La Concepción and boutique brand Magnus, all in Tarija; Cepa de Oro from Cinti; and 1750 from Samaipata, a cool-climate valley with four centuries of winemaking history.

“Few people realize that drinking wine from a certain region has the potential to drive sustainable economic development,” says Escobar.

“For example, 1,000 people would be lifted out of poverty in Bolivia if we sold less than 3% of what Robert Mondavi sells in a year. And choosing to do good doesn’t mean you have to sacrifice quality.”

Canadian wines often elude U.S. shelves, but those in the know pack bottles in their suitcases before they leave Ontario or the Okanagan. Treasure hunters can now add one more region to the list: Kootenays.

Surrounded by stunning wilderness, this mountainous Geographic Indication (GI) in the Rockies of southeastern British Columbia takes its name from the Kootenay River and the Kutenai First Nations people.

Wedged between two rugged mountain chains, the Selkirk to the west and the Purcell to the east, the vineyards sit atop 10,000-year-old granite and glacial till, which ranges from fine dust to large boulders.

“You can see the soil sparkling in the sunlight,” says

While the area only received GI status in 2017, the first commercial winery opened in this secluded valley in 2001.

There are now six wineries here.

“We had family in the area and visited often,” says Johnson.

“We purchased a cherry orchard first, but when we saw a property for sale in 2006 that was perfect for grapes, we could not resist and had an offer on the table the very next day.”

Johnson sold the first parcel to develop the second one, an abandoned apple orchard, into 28 acres of vinifera vines.

Johnson grows grapes on their own rootstock for wines with “pure and full flavors,” he says. The intensity of the sunlight, a result of growing grapes at 2,000 feet above sea level on the 49th parallel latitude, “combine to create wines with a new fingerprint of flavors,” he says.

Many of the usual cool-climate varieties succeed here. Pinot Noir is the most planted variety, followed by Gewürztraminer, Pinot Gris, Chardonnay and Riesling, all suited to the Burgundian and Alsace winemaking styles that producers prefer. The wines are already winning awards in Canadian competitions.

For now, most viticulture happens on the warmer valley floor. While the GI encompasses a mountainous swath of more than 4.9 million acres, only a fraction of it suits viticulture: Just 94 acres are planted.

However, the changing climate may help the prospects for this little region.

As Ayana Misawa walks through her vineyard, she adjusts waxy paper umbrellas that protect luminescent pink Koshu grape bunches from rain. She says that such attention to detail is a strength of Japanese winemaking.

“Vineyards are well-maintained and cellars are kept clean,” she says.

Misawa is the chief winemaker for Grace Winery, her family’s property located in the mountainous prefecture of Yamanashi, southwest of Tokyo on the island of Honshu.

Most focus on indigenous varieties like Koshu and Muscat Bailey A, but plantings of international grapes have climbed, as have domestic wine sales.

“More than ever, Japanese consumers want to support Japanese products,” she says.

Japanese wine journalist Yoko Obara calls it the “Japan Wine Boom.” The proliferation and notoriety of wineries has helped to cultivate a new breed of customer “eager to follow those stories…of certain winemakers and buy their wines,” she says.

Misawa describes Koshu with the fondness of an artist.

However, climate change may alter the island nation’s viticultural landscape.

“In my grandfather’s time, very few wineries grew vinifera because it was hard to get full ripeness,” says Misawa. “The Yamanashi region is considering…Syrah and Tempranillo,” she says, despite the local tradition of producing white wine. Still, at 20% of Japan’s total production, Koshu remains the most important variety.

Nagano, the second-largest region, also has the mountainous terrain and high-elevation vineyard sites to thwart rising temperatures. But the frequency of typhoons and volume of rainfall have ballooned, says Toru Konishi of Villad’est Winery.

The country’s largest wine region, Yamanashi boasts nearly one-third of Japanese wineries. Most focus on indigenous varieties like Koshu and Muscat Bailey A.

Like at Grace, Villad’est installs guards on Pinot Noir bunches before heavy rains.

Though the inclement climate frustrates some, Konishi says it’s forced winemakers to abandon ambitions of rich, full-bodied styles in favor of the subtle, delicate expressions that complement Japanese cuisine.

Other varieties found in Nagano include Merlot and Ryugan, a vinifera grape native to Asia that’s used for dry, quality wines.

On the cold, northern island of Hokkaido, which is known for ski resorts and hot springs, intrepid winemakers have planted German and other cool-climate varieties. Snowy, freezing winters force growers to bury vines for protection.

Despite tough conditions, a flurry of wineries have opened.

In the long run, the island could prove the nation’s most-climate proof wine region.

While Japanese wine is diverse and evolving, Obara believes “rapid improvements in quality” are pushing it toward world-class levels.

Home Videos The WORLD of WINE – Wine News. Cheap wine, tasting notes and cooking with wine The World of Wine – May 2021 … END_OF_DOCUMENT_TOKEN_TO_BE_REPLACED

How to visit Napa Valley on a Budget. In this video Carson and I explain a few ways to enjoy Napa on the cheap. Tip and advice about how to visit Napa … END_OF_DOCUMENT_TOKEN_TO_BE_REPLACED

Home Videos Get To Know Argentina Wine | Wine Folly If you love Malbec, Argentina is your ultimate wine region. But that’s not … END_OF_DOCUMENT_TOKEN_TO_BE_REPLACED