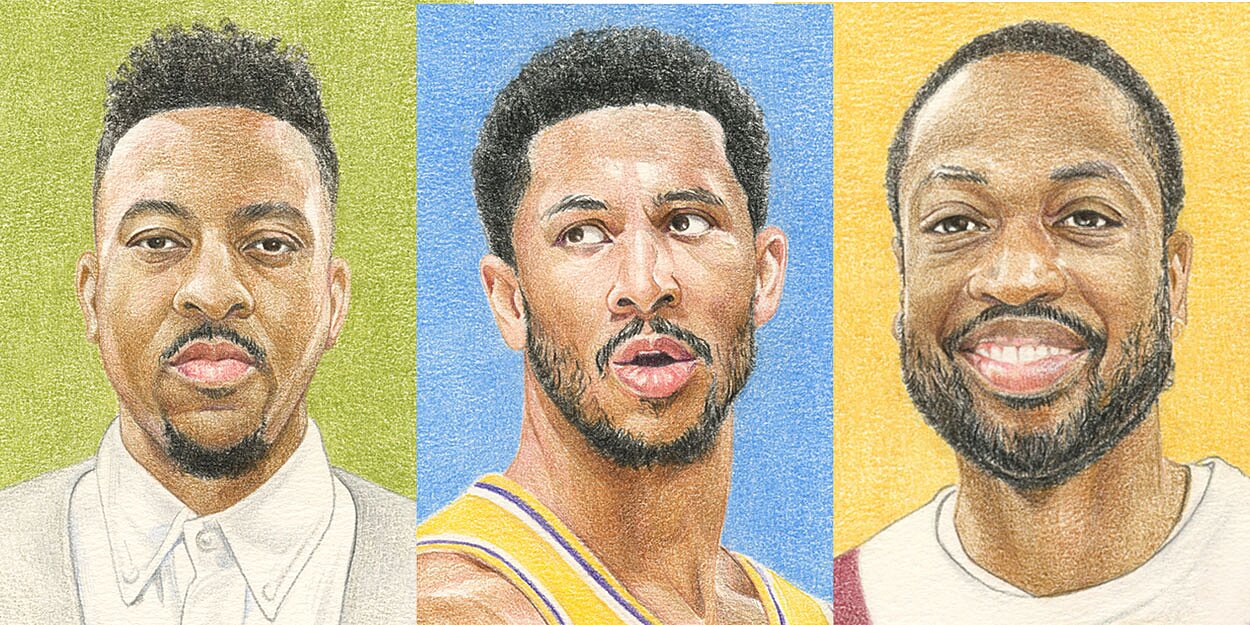 “This is a safe wine space,” said Master of Wine Vanessa Conlin as she introduced the day’s coursework. Conlin, the Head of Wine at the wine curation site Wine Access, was speaking to the recipients of NBA player Josh Hart’s Diversity In Wine Scholarship Program. They had all gathered over Zoom for a class to prepare for the Level 1 exam of the WSET (Wine & Spirits Education Trust). As folks began introducing themselves, it became clear that the range of experience, in both wine and life, was vast. There were mothers and nurses, plant physiologists and law students. There were people who planned to use this program to switch careers and those who wanted a way to fill the long, empty hours of quarantine.

Hart, a shooting guard for the New Orleans Pelicans, formed this scholarship with Wine Access in an effort to make the wine industry more welcoming and inclusive—particularly for members of the BIPOC community who have historically been left out. Hart is a wine lover himself (he even has an Instagram dedicated to sharing his favorite bottles), and he’s one of the more recent players to become an outspoken member of the NBA’s unofficial wine club—a club that’s still going strong, as demonstrated by the hundreds of bottles that were shipped to the league’s “bubble,” the sports complex in Orlando that safely housed teams for the 2020 season. Stars like Dwyane Wade, a three-time NBA champion, have been at the forefront of the NBA’s wine obsession for years. But players aren’t just drinking wine among themselves anymore; they’re channeling their personal passions into making the industry more inclusive.


“I love wine now, but if I hadn’t been a Laker, my being in the wine world probably wouldn’t have happened,” Hart said, reflecting on his time with Los Angeles’ team. “As an NBA player with a platform, I can help minorities who don’t have the resources, or who are nervous or hesitant, to get into the wine space.”

Beyond awarding a WSET Level 1 course to 100 recipients, Hart’s program will sponsor five students in Level 2 and three students in Level 3; those top three will get to travel to Napa with Hart for a wine-filled weekend. “My dream is for people in the program to further their pursuit of a career in wine,” Hart said. “Hopefully we keep this program going, and in 10, 15, 20 years, there will be a winemaker in Napa who first started with the WSET from this partnership.”

In the more immediate term, Hart hopes to influence the perception of wine itself. “I’m trying to change the stereotype around wine as something for old, rich, white men,” he said.

Other players, like Wade, share this goal. “One of the reasons I got into the wine industry was to change the common misconception of wine as pretentious,” Wade said. “I didn’t grow up knowing what wine is. Wine was perceived in this really uppity kind of way and I wanted to be a part of showing that it’s not that—of respecting what goes into making one simple bottle of wine.”

In 2014, Wade created his own wine brand, Wade Cellars, in partnership with Napa’s Pahlmeyer winery. The next year, while on vacation, Wade was photographed sitting on a banana boat and toasting with red wine with LeBron James, Carmelo Anthony, and Chris Paul. The group became known as the Banana Boat Crew, and that moment ignited a wine frenzy within the league. Ever since, Wade has been a role model for others looking to get into the business.


“Just start buying wine,” Wade said. “Start asking questions. Start researching. I’m no different than anyone else. I didn’t go to school for wine. I’m not a winemaker. It’s just about having something you enjoy and jumping into it.”

In addition to being an ambassador for all things wine, Wade has utilized his platform to support the BIPOC community. Along with fellow NBA legends (and wine lovers) Chris Paul and Carmelo Anthony, Wade started a nonprofit, The Social Change Fund, which champions issues such as criminal justice reform and economic equity. Through initiatives like donating portions of Wade Cellars bottle sales to the fund, Wade has been able to bring these two passions together.

Wade has also created space for other players to follow in his footsteps. One such player is Miami Heat forward Maurice “Moe” Harkless. Last year, Harkless turned his website into a hub for Black-owned businesses called Black Lives Now. He started hosting “Wine Wednesday” on LeBron James’ platform Uninterrupted, and he partnered with The Prisoner Wine Company, a Napa Valley winery whose parent company, Constellation Brands, donated $1 million to the Equal Justice Initiative, a nonprofit that advocates for equal treatment in the criminal justice system, in June 2020.

“I want to eliminate the stigma of wine as a snobby, high-class experience,” Harkless said. “Wine is for everybody to enjoy.”

Advocating for diversity within the wine world is one thing. Showing up as part of the solution is another ball game—and that’s what these NBA stars have been doing. They’re proof that, in the words of Wine Access CEO Joe Fisch, “Representation matters. It helps when you have someone who looks like you doing something within the industry.”

Frye didn’t grow up seeing wine on the dinner table. Even as an adult, he didn’t think it was possible for him to get into the wine business. But he kept asking questions, tasting new grape varieties, exploring new regions, and having conversations—especially with fellow NBA players.

In 2016, Frye and his Cleveland Cavaliers teammates, which included LeBron James and Kyrie Irving, earned themselves the nickname “the wine team” because of the Cavaliers-wide obsession with wine. Frye particularly loves Oregon wines, a passion he started to develop in 2007, when he played for the Portland Trail Blazers. In 2020, Frye created Chosen Family Wines in partnership with Willamette Valley–based winery L’Angolo Estate.

Throughout the past year, Frye and his Chosen Family team have been asking themselves a question: “What can we do to make this industry better?” Frye’s answer: “I want my daughters to see people of color making wine, having successful wine labels, growing their own grapes.”

In an effort to accomplish this goal, Frye has been working on an initiative, launching this spring, called the One Barrel Challenge. Seven wineries in Oregon, including Frye’s Chosen Family, will be selling the contents of one barrel of wine, or 300 bottles, and donating all proceeds to the Maurice Lucas Foundation. Lucas was a five-time NBA All-Star (Frye both played against and was coached by Lucas), and the foundation created in his honor works to support Black youth in Portland. In years to come, Frye hopes to use the One Barrel Challenge as a platform to promote inclusion within and access to the wine industry.

“The wine industry should want different perspectives, cultures, and colors to be there because those perspectives are going to challenge it to constantly evolve,” Frye said. “With the One Barrel Challenge, we are planting a seed. We’re bettering the business so that we can play with a full deck of cards. Right now, we’re only playing with half a deck.”

There’s another NBA player involved in the One Barrel Challenge, CJ McCollum, a guard for the Portland Trail Blazers. McCollum released his first wine with Oregon’s Adelsheim Vineyard, a Pinot Noir, under the McCollum Heritage 91 brand in September 2020; his second bottling, a rosé, arrives this month. Like many of the other players, McCollum is hyper aware of the unapproachability of wine.


“People are afraid of it,” he said. “You go to restaurants, they bring you the wine menu, it’s intimidating. I want to make people more comfortable with wine, show them that you can not know about wine and still enjoy it.”

McCollum has already made some headway with family and friends, to the point where even his grandma, who “is not a big wine drinker at all,” will request a glass of Heritage 91. “As a Black man who plays in the NBA, I’m able to not only expose people in my profession to wine, but people from my childhood and in my family that normally wouldn’t approach it,” he said. “If a kid from Canton, Ohio who didn’t like wine can evolve in this space, I think anyone can.”

Both as individuals and as a collective, NBA players are making the wine world a more accessible space. “Wine has felt like an exclusive industry historically,” McCollum said. “I think there’s so much opportunity to increase exposure and diversify the wine industry, and that will improve the industry overall.”

That’s one of the reasons why the team at Wine Access, which has long been focused on wine education, is so excited about Josh Hart’s scholarship. “We’re missing out on a huge demographic of potential wine enthusiasts,” Fisch said. Fisch’s hope, which Hart shares, is that the scholarship continues to grow, inspiring more and more people to make their own way in wine. This year, 100 recipients. In 10 years? 1,000 recipients.

The NBA’s obsession with wine has blossomed into a platform for sparking social change, and the players themselves are driving a new future for the industry—one that’s equitable, open-minded, and reflects the diversity of wine itself.

“The NBA is one of the most inclusive, diverse businesses in the world,” Frye said. “Why can’t wine be like that?”

Home Videos The WORLD of WINE – Wine News. Cheap wine, tasting notes and cooking with wine The World of Wine – May 2021 … END_OF_DOCUMENT_TOKEN_TO_BE_REPLACED

How to visit Napa Valley on a Budget. In this video Carson and I explain a few ways to enjoy Napa on the cheap. Tip and advice about how to visit Napa … END_OF_DOCUMENT_TOKEN_TO_BE_REPLACED

Home Videos Get To Know Argentina Wine | Wine Folly If you love Malbec, Argentina is your ultimate wine region. But that’s not … END_OF_DOCUMENT_TOKEN_TO_BE_REPLACED