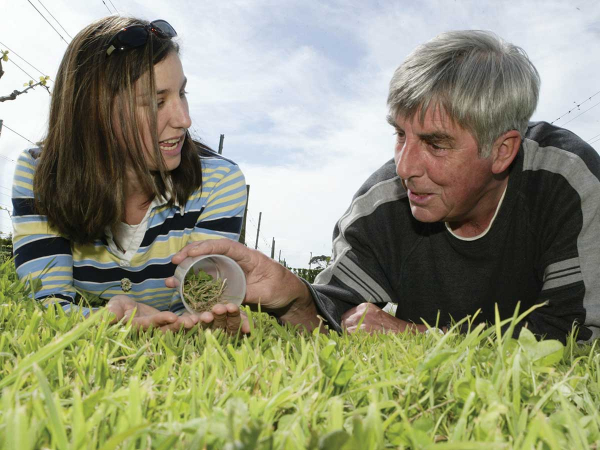 The academic who helped seed enthusiasm for undervine cover crops in New Zealand has left a legacy of biodiversity in vineyards.

Professor of Ecology Steve Wratten, of Lincoln University’s Bio-Protection Research Centre, died in March, but his countless influences remain, says Viticulturist Bart Arnst, who began working with Steve in the late 1990s. “His research and presenting have been instrumental in getting people to understand how effective biological controls are, and how we can implement them into the day-to-day running of vineyards.”

Steve was an expert in ecology, biological control of pests and enhancing ecosystems on farmlands, and supported the use of non-crop plants to provide shelter, nectar, alternative food and pollen (SNAP) to assist natural predators of pests.

That saw him work with practitioners like Bart, who studied the impacts of mid-row buckwheat on light brown apple moth in vineyards as wel as with the 90 PhD students he supervised in projects that allowed nature to flex its muscles. Included among them was Viticulturist Samantha Scarratt, who had Steve as her PhD supervisor at Lincoln University from 2002.

She says he was “incredibly passionate about his life’s work in habitat manipulation and ecosystem services”. He developed worldwide connections, was recognised for his work globally and was “loved by all of his students”, she adds. Through Steve’s tutelage they developed a recommendation for the New Zealand wine industry, taken up by predominantly organic growers, where flowering plants such as buckwheat (and occasionally phacelia and alyssum) are planted in the vine rows to attract beneficial insects to help combat insect pests in vineyards in New Zealand. Steve was always enthused about a new opportunity to grow the work here and abroad, and he will be “remembered by many”, Samantha says.

Among Steve’s programmes was Greening Waipara, a research-driven project to measure and enhance ecosystem services in North Canterbury vineyards, focused on finding ways to reduce chemicals by increasing functional biodiversity in vineyards. The project began 15 years ago, driven by Lincoln University, local winegrowers, the Hurunui District Council and Manaaki Whenua Landcare Research. With a goal of restoring native plantings throughout the landscape, the project also saw growers plant groundcover under vines to provide SNAP for native enemies of insect pests. “I know of one vineyard that hasn’t used pesticides at all after putting buckwheat in,” Steve said in a story in Winegrower magazine in April last year. “That’s a tangible statement about how biodiversity can help save money.”

More recently he worked with Mauricio González-Chang on understanding and implementing non-insecticide control of the New Zealand grass grub beetle. That included a three-year research project at the Kono vineyard, Whenua Awa/Tohu Wines, in the Awatere Valley, Vineyard Manager Mondo Kopua says “Steve was brilliant to work with and was very supportive of his students”.

Professor Travis Glare, Director of the Bio-Protection Research Centre, says Steve was one of the most influential researchers and thinkers in the areas of sustainable agriculture and ecosystem services in the world. “Having published over 400 journal papers, over 100 books and chapters in books, supervised 90 PhD students and given many keynote addresses on the subject, his influence has been immeasurable.”

Home Videos The WORLD of WINE – Wine News. Cheap wine, tasting notes and cooking with wine The World of Wine – May 2021 … END_OF_DOCUMENT_TOKEN_TO_BE_REPLACED

How to visit Napa Valley on a Budget. In this video Carson and I explain a few ways to enjoy Napa on the cheap. Tip and advice about how to visit Napa … END_OF_DOCUMENT_TOKEN_TO_BE_REPLACED

Home Videos Get To Know Argentina Wine | Wine Folly If you love Malbec, Argentina is your ultimate wine region. But that’s not … END_OF_DOCUMENT_TOKEN_TO_BE_REPLACED