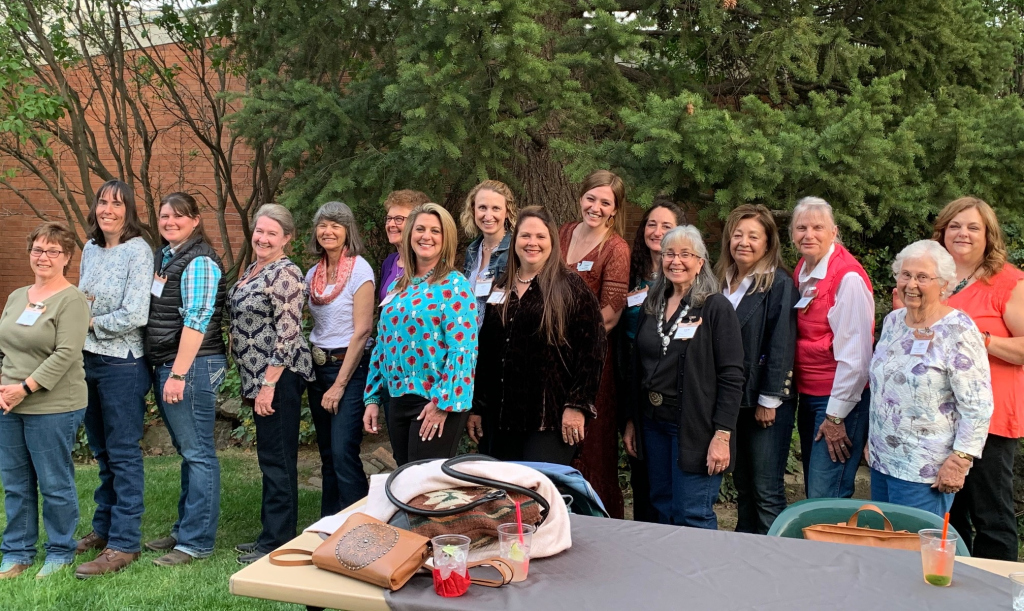 I wish you could have been with Callie and me when we were in Pendleton, Oregon for the American National CattleWomen Region V meeting last week. First in-person meeting in 58 weeks and it was awesome.

Stacey Jackson, a Siskiyou County CattleWoman, wrote: “What a wonderful American National CattleWomen Region V Meeting in Pendleton, Oregon. Thank you so much to the Region V ladies who welcomed the California CattleWomen with open arms! We toured a beautiful ranch, the 9 Mile Ranch, spent time in Walla Walla checking out their awesome wines, listened to some great speakers who encouraged us to stand up for our industry and way of life, made new friends, watched a ranch rodeo, attended a trade show, learned a ton about the area, took an underground tour of Pendleton, and just relaxed.

Yes, that was relaxing for me.

As a CattleWoman, I am proud of our way of life and the fact that we produce excellent cattle for the American people to eat. Natural and nutritious. No laboratories involved. I am proud of how we care for the land, and not just for the beef but also for wildlife and open spaces.

I am blessed by the good Lord to have been born into a family and nation of people who value freedom and choice. I choose to live this life, make it the best it can be, and pass it on to my

Stacey expressed our lifestyle and we agree with her.

Pendleton had large banners welcoming CattleWomen at the convention center, hotels, and the businesses knew we were in town as we wore our badges with a leather horned cow head.

The delicious meals at the meetings even though they started at 7 a.m. each morning in the Pendleton Convention Center with a full breakfast. Saturday, Oregon went back to no indoor meals due to COVID, so we were lucky to be able to dine indoors.

The events we were welcomed at, such as the Cattle Barons Ranch Rodeo with Team Branding, Team Sort and Doctor, Mixed Team Branding, and new to me was Stock Dog Calf Roping when a dog brought a steer across a white line so the cowboy could rope it. The Trailer Loading was wild, with two steers and four ropers. Two roped and tied down one steer while other two men got steer roped and drug into trailer with steer jumping and kicking the cowboy. They were using roping cattle.

At the Convention Center there was the Cattle Barons Trade Show, with a horse and dog sale following day. Downtown the shop/store employees welcomed us, but due to COVID there was no Pendleton Woolen Mills Tour, or Round Up Museum being open.

There were 98 registered for the meeting, so you can imagine the hugs and smiles everyone gave and received. Oregon and Washington CattleWomen were incredible hostesses with attendees from Montana, Colorado, Wyoming, and California. Oregon President Diana Wirth is from Klamath Falls, and Washington President Kady Porterfield is from Ellensburg.

ANCW President Evelyne Greene is from Alabama and Incoming President Reba Mazak is from Florida with another ranch in Texas. I remember meeting Evelyne in either 2004 or 2013 when we educated the public about beef at women’s shows and state fairs in eastern states, and Reba in New Orleans when she arranged a fabulous tour of Louisiana plantations and cattle ranches for ANCW.

The Pendleton Round Up goodie bag must have weighed 10 pounds with awesome treats; edible, drinkable, wearable and useful. The tiny bottle of “sanitizer” with spray top. Keep them germs away. Just spray a little on the tongue and you are germ free, and soon happy after many uses. It  was vodka. A clear plastic stadium bag from Multimin, a wrist watch from Pendleton Whiskey, a Cosmic Crisp apple in red Cougar bag, developed by Washington State University crossing Honeycrisp and Enterprise apples, gloves, jars of mustard with different flavors, a shot glass for shot of Pendleton Whiskey, honey, sachet of lavender,  to name a few things. Glad I wasn’t flying and trying to get it home.

Our welcome reception was enjoyed at Raley House/Sundowner Bar and Grill, outdoors on the lawn during a warm evening in Pendleton. Western music, delicious appetizers and drinks, after we had a 130-mile bus tour of Washington. We had visited 9 Mile Ranch, a family owned and operated 1,000 head cow/calf operation located in Southeastern Washington and Northeastern Oregon.

The ranch we visited was at 400 ft elevation, and 9 inches of rainfall. Saw Red Angus cows and calves on the range, and the well they were drilling for water to be piped to different pastures. Expected to go 800 to 1,000 feet.

Wine tasting was in Walla Walla since wineries were closed. Previous day many enjoyed the Underground Tour and The Working Girls Hotel in Pendleton. Dave Duquette, Western Justice Executive Director was a speaker at the ANCW Region V meeting. Western Sports Industry Coalition is a collective voice, presenting knowledge, experience, and legitimate objective research to lawmakers to preserve and protect the future of western sports events, traditions and to substantiate the industry’s unified commitment to the welfare of animals.

Jean Barton has been writing her column in the Daily News since the early 1990s. She can be reached by e-mail at jbarton2013@gmail.com.

Home Videos The WORLD of WINE – Wine News. Cheap wine, tasting notes and cooking with wine The World of Wine – May 2021 … END_OF_DOCUMENT_TOKEN_TO_BE_REPLACED

How to visit Napa Valley on a Budget. In this video Carson and I explain a few ways to enjoy Napa on the cheap. Tip and advice about how to visit Napa … END_OF_DOCUMENT_TOKEN_TO_BE_REPLACED

Home Videos Get To Know Argentina Wine | Wine Folly If you love Malbec, Argentina is your ultimate wine region. But that’s not … END_OF_DOCUMENT_TOKEN_TO_BE_REPLACED