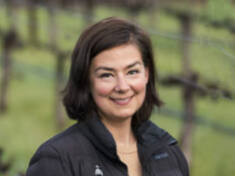 Sarah Ferguson has been promoted to viticulturist at Silverado Farming Company in the Napa Valley.

She was viticulture research manager at Silverado starting in 2017.

In addition to her work at Silverado Farming Company, Ferguson has worked with the teams at Dana Estates, Opus One, Benovia, Sterling Vineyards and Roederer Estates. Her diverse work portfolio illustrates her knowledge not only of Napa Valley cabernet.

Ferguson, who studied metabolic biology at UC Berkeley, went on to receive her master’s degree in viticulture and enology from the UC Davis.

Derr guides his own company John Derr Farming LLC and is a vineyard consultant for such noted wineries as Kapcsándy Family Winery, Ilsley Vineyards and Blankiet Vineyards, the winery stated.

Beverly Hanson has been promoted to director of operations for Willow Creek Wealth Management in Sebastopol.

Before joining Willow Creek, Hanson was the operations director for Sanctuary Wealth Services, where she provided day-to-day operational support to advisers across various custodians and technology platforms. She also had a three-year tenure at TD Ameritrade Operations Panel.

Patricia Murillo has joined Center for Volunteer & Nonprofit Leadership as chief program officer, and Maryam Nabi has been hired as marketing and communications co-director.

Prior to joining CVNL, Murillo served as a consultant to diverse organizations and projects including as the Lead Facilitator for Women Leaders for the World through How Women Lead. She also was executive director of Alternatives in Action where she expanded the programmatic and organizational scope and served as the senior director of Program Services for the Boys & Girls Clubs of San Francisco.

Nabi previously served as the director of Marketing and Communications at the San Francisco Conservatory of Flowers in Golden Gate.Prior to the Conservatory, she spent years in the private sector. She worked as a journalist and editor at publications like SPIN magazine, the Financial Times, and Fox.

Joanne Halliday has been promoted to director of healthy aging at Vivalon, a San Rafael-based nonprofit that promotes the independence, well-being and quality of life for older adults and people living with disabilities.

She joined Vivalon in June 2020 as a business analyst for the organization’s healthy aging programs and services. In that role, she facilitated business plan development and the management of data to drive decision-making.

Prior to joining Sojourn Cellars, Seymour was the senior brand manager as a consultant for Boich Family Cellar, a luxury Napa Valley property, where he oversaw and managed their wholesale partners.

The winery stated that Seymour began his career in wine 20 years ago working for the Robert Mondavi Family of Wines as assistant general manager and assistant winemaker. He left the Mondavi Family to start his own private label of small production California wines in partnership with a Hong Kong-based distribution corporation. He sold his interest in the company before joining Trione Vineyards and Winery in Sonoma County as national sales manager.

The winery was founded in 2001 by Craig Haserot and Erich Bradley.

Kristyn Dunlap had joined WineGlass Marketing, a wine, beer and spirits marketing agency based in the Napa Valley. She is joining the firm as head of Client Services.

The firm stated she has spent the last three years consulting for brands and agencies large and small, both in client service and as a brand and content strategist.

Previously, Dunlap was senior vice president at MullenLowe, serving on the executive team of its Los Angeles office. Before MullenLowe, Dunlap worked at Goodness Mfg. and the Los Angeles office of digital agency Deep Focus. After starting her career at a creative boutique in the Midwest, Dunlap gained much of her agency best practices training during her nearly five years at Crispin Porter + Bogusky, where she oversaw creative development and production for IKEA, Miller Lite, Miller High Life, and Best Buy.

A new fellowship in memory of UC Davis alumnus and Napa Valley winemaker Richard A. Ward has been established in the Department of Viticulture and Enology by his widow, Linda Reiff, to help in the development of a new generation of winemakers.

The fellowship will annually provide financial support to a graduate student in viticulture and enology who will assist with crucial research in the wine industry. Ward was co-founder and managing partner of Saintsbury vineyard and winery in Napa. He died in 2017 following a fight with cancer. Reiff is president and CEO of the trade association Napa Valley Vintners.

Ward earned his bachelor’s degree in engineering at Tufts University in Boston and then followed his dream to make wine in California. After completing his graduate work in winemaking at UC Davis, he and Graves started the Saintsbury winery in 1981.

The Richard A. Ward Fellowship will award $10,000 each year for at least the next decade to help defray tuition and other expenses. Saintsbury also is launching a new wine series to help raise funds to support the fellowship program beyond the initial 10 years.

Home Videos The WORLD of WINE – Wine News. Cheap wine, tasting notes and cooking with wine The World of Wine – May 2021 … END_OF_DOCUMENT_TOKEN_TO_BE_REPLACED

How to visit Napa Valley on a Budget. In this video Carson and I explain a few ways to enjoy Napa on the cheap. Tip and advice about how to visit Napa … END_OF_DOCUMENT_TOKEN_TO_BE_REPLACED

Home Videos Get To Know Argentina Wine | Wine Folly If you love Malbec, Argentina is your ultimate wine region. But that’s not … END_OF_DOCUMENT_TOKEN_TO_BE_REPLACED