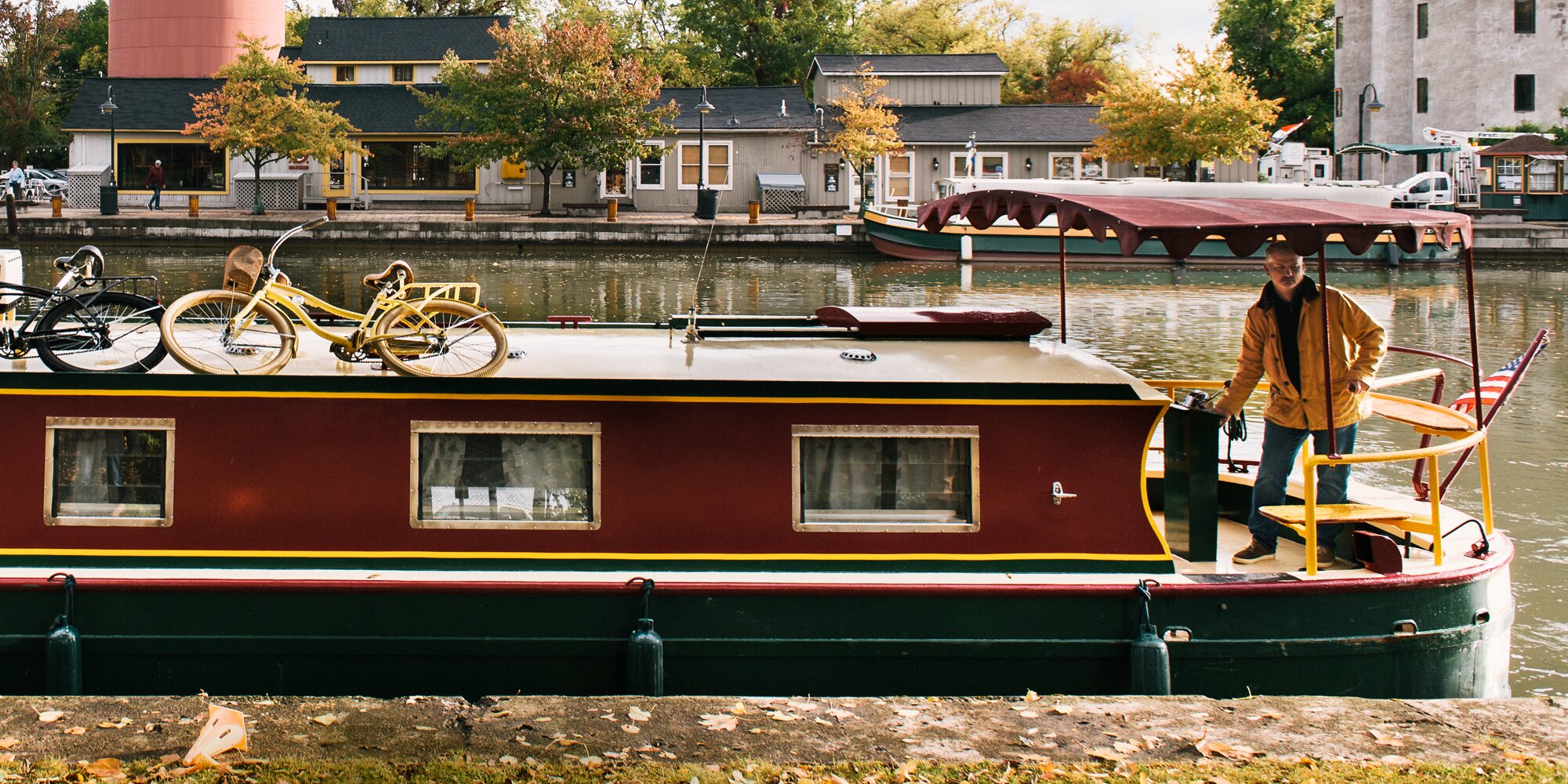 “Upstate Europe, Baby!” my friend Sean Wilsey announced, popping the blue sanitary seal tape on the cabin and scooting below to stow gear. Joining me on deck moments later, he cast off lines while I steered the Cayuga down the Erie Canal toward New York’s emerging food and beverage heartland.

The phrase had been a joke between us since we’d returned from abroad in the late 1990s. Sean had been a Venetian gondolier’s apprentice; I’d written a novel in Paris—experiences that had turned us into lifelong Europhiles. At the height of last summer, both of us sorely missed the Continent. With Europe’s doors effectively shut, we wondered: Was there someplace where we could simulate European-style travel in the American campagne? It turned out there was.

As the old song goes, one can travel “from Albany to Bu-uh-ffa-lo” on America’s most extensive man-made waterway. For us Europhiles, though, Brian Keenan of Erie Canal Adventures recommended the nearly 90-mile stretch from Rochester to Syracuse. Equipped with a two-cabin boat and using the Erie as our Canal du Midi, we’d tour waterside hamlets, tasting our way through breweries, wineries, cideries, and restaurants. Hopes were high, as were apprehensions. Could one truly have a European experience upstate, or was it all a cabin-fever dream?

the former Phelps General Store is now a museum.


Historic towns like Palmyra line the canal; the former Phelps General Store is now a museum.

While training me on mooring the boat and crash-avoiding, Keenan explained that our Euro fantasy was not an unusual request during this pandemical summer. “People are desperate to get away. We don’t want to take advantage of the situation, but we think we have a story to tell. You can have an adventure and still be safe. It checks a lot of boxes.”

Training complete, we motored to Pittsford to check the first box: a canal-side craft beer tasting at Seven Story Brewing. Beer and the canal have had a profitable symbiosis since the canal became a way to mainline barley and hops into Manhattan two centuries ago. But it took state legislation in 2012 and 2014 to revive regional beer making after Prohibition nearly killed it. Now, most canal towns have their own breweries. At Seven Story, freshly picked hops from New York farms made our flight tangy and distinct. Afterward, we tied up the Cayuga for the night, plugging her in at a shoreside charging station, and fell asleep to the lapping of waves.

the author and his friend in a vineyard


The author and friend Sean at Casa Larga Winery.

The next day, we bought pas- tries from Pittsford Farms Dairy & Bakery and headed east to Fairport. There, we pulled bikes off the boat’s roof and cycled to Casa Larga winery, which pro- duces highly drinkable Cabernet Franc blends, Rieslings, and—OK, OK—wine slushies. Founder Andrew Colaruotolo came from Gaeta, Italy, in the 1950s and started the winery with sweet native Concords and Isabellas.

But when the Finger Lakes wine pioneer Dr. Konstantin Frank figured out how to grow European vinifera grapes upstate, Colaruotolo followed suit to positive effect. We particularly liked Casa Larga’s Meritage blend of Cabernet Sauvignon, Cabernet Franc, and Merlot. And because of regulations mandating that food be served with wine, our tasting came with superb local charcuterie and cheese.


Luke DeFisher of Rootstock Ciderworks in his family’s orchard.

If the story of the region’s vineyards is the tale of a 100-year evolution from Welch’s grape juice to fine Rieslings, a similar evolution can be seen in its orchards, which are looking past the Mott’s applesauce of their early days. After piloting the Cayuga through a lock, we pulled up in Palmyra to meet with Luke DeFisher, the bright young heir to a century-old family business, Rootstock Ciderworks. “In the Old World,” DeFisher told us, “people approach cider like beer. But here, we changed the vocabulary.” Using yeasts traditionally associated with winemaking, Rootstock aims for a “transformation of the whole fruit,” producing a range of hard ciders and spirits, like apple brandy with “notes of fresh, fermented, cooked, and caramelized apples.”

What to eat with this good drink? One afternoon, we made use of the kitchen on board, catching a white perch from the canal and grilling it on the barbecue. But we also made forays to local restaurants. Because regional COVID rates were low, we traded barge for car on our last day and looped Cayuga Lake and Seneca Lake. You can drop in at a place like Dano’s, which follows the Austrian heuriger tavern tradition of serving crisp Rieslings with schnitzels and spaetzle in an elegant dining room. Restaurateur Christopher Bates has turned up the volume on Finger Lakes food even further by transforming an entire block of Geneva with his restaurants F.L.X. Table, F.L.X. Provisions, and F.L.X. Fry Bird. But by far the most exciting compromise between upstate and Europe was Eric Bolyard and Caleb Ganzer’s pop-up, Supernatural Lake.

The proprietors of Manhattan hot spot wine bar Compagnie des Vins Surnaturels established this chic-but-rustic complex of cottages and a restaurant on Cayuga Lake as a refuge from the pandemic. Sip- ping excellent wines lakeside after enjoying Super- natural’s Friday pig roast, we at last had that nostalgic feeling we remembered from our European jaunts. “This place is on a knife’s edge,” Ganzer said, pouring us one last glass of fragrant Gewürztraminer. “Lots of people came up during the pandemic. Some of them were like, ‘This place is nice, but I’m never coming again.’ But a lot more said, ‘It is awesome here, and I can’t wait to come back.'”

Wined and dined and beered and cidered, Sean and I rolled into the Mirbeau Inn & Spa in Skaneateles for one last European delusion. Turreted and honey-colored, with a board-for-board simulacrum of Monet’s bridge at Giverny arcing gracefully over, yes, a lily pond, Mirbeau could be the seat of power for an upstate duke if there were one. As we departed, I held up my arm as if it were a dial and asked Sean to make a ruling. “What do you think overall?” I asked, indicating right for Europe and left for upstate. Where would he put the Euro-meter on this trip? “Right in the middle, baby!” Sean laughed. “But I’m definitely coming back.”


A stunning pool at Lake House on Canandaigua.

If you’re adding a few days to your canal trip, the Mirbeau Inn & Spa in Skaneateles (rooms from $250, mirbeau.com) will keep channeling the Euro vibe. Or check in to the design-forward Lake House on Canandaigua (rooms from $181, lakehousecanandaigua.com), opened in 2020, with stunning views and a luxurious spa.

The Erie Canal and Finger Lakes wine region are about a five-hour drive from New York City. Or fly into Rochester and rent a car; from there, it’s a 30-minute drive to Erie Canal Adventures. The company has a fleet of barges equipped with full kitchens and dining nooks, allowing travelers to cook and dine on board, with options to reserve boats for three-, four-, or seven-night charters (from $1,850, eriecanaladventures.com).

Before casting off in Pittsford, grab pastries and bread at Pittsford Farms Dairy & Bakery and beer for your barge journey at Seven Story Brewing. In Fairport, you can bike to Casa Larga for a tasting or to grab lunch at the winery’s food truck. When docking in Palmyra, take a car or cab to the beautiful farmstead cidery Rootstock Ciderworks for otherworldly hard ciders.

With Finger Lakes wines winning international competitions, you’ll want to do some wine tasting on your boattrip. Once moored, take a taxi or car to the west side of Seneca and Keuka lakes. Try the Rieslings and Gewürz- traminers at Hermann J. Wiemer, ditto at Weis Vineyards, and the scintillating Rieslings at Dr. Konstantin Frank. Stop at F.L.X. Fry Bird in Geneva for a fried chicken sandwich, or visit F.L.X. Table for an upscale dinner. Join the Finger Lakes wine CSA, run through Ithaca Wine Ventures, to taste the wines at home.

To explore the Cayuga and Seneca lakes area, rent a car and start your day with a perfect diner breakfast at Auburn Diner (64 Columbus St., Auburn) before tasting the Chardonnay and Riesling at Standing Stone Vineyards and the dry Riesling at Lamoreaux Landing Wine Cellars. For lunch, stop in at Dano’s for real-deal schnitzel, and then consider nipping up to Lively Run dairy farm and creamery, north of Trumansburg, to sample some goat cheeses. You’ll find a much-needed espresso pick-me-up between wine tastings at Gimme! Coffee in Trumansburg.

Home Videos The WORLD of WINE – Wine News. Cheap wine, tasting notes and cooking with wine The World of Wine – May 2021 … END_OF_DOCUMENT_TOKEN_TO_BE_REPLACED

How to visit Napa Valley on a Budget. In this video Carson and I explain a few ways to enjoy Napa on the cheap. Tip and advice about how to visit Napa … END_OF_DOCUMENT_TOKEN_TO_BE_REPLACED

Home Videos Get To Know Argentina Wine | Wine Folly If you love Malbec, Argentina is your ultimate wine region. But that’s not … END_OF_DOCUMENT_TOKEN_TO_BE_REPLACED