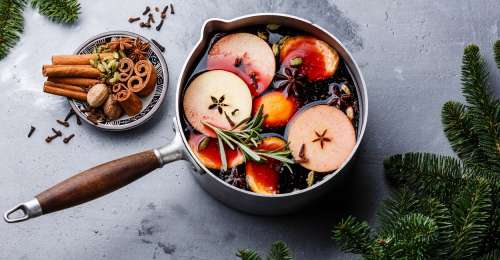 WhIle the season of mulled wine may have passed officially, we aren’t quite over it yet. Generally cherished during the Christmas season, mulled wine traces its roots back to ancient Europe. Traditionally, this classic blend of spices and wine finds its way to tables in the form of a warm, comforting winter drink.

Also known as spiced wine, it is essentially made with red wine diluted with water, sweetened with sugar, flavoured with spices such as cloves and cinnamon, and served hot. However, home wine makers and chefs across the world have often added their own twist to it, adding or replacing some of the ingredients. Post 16th century, winemakers began adding fruits such as oranges, apples, lemons, etc. It is a drink that is known for its medicinal properties as well.

Now, an Indian brand is giving it a fresh, desi twist.

Grover Zampa Vineyards have taken the mulled wine game a notch higher with the One Tree Hill Mulled Kadha Wine. Not only is it India’s first bottled mulled wine, but it has age-old ingredients derived from the Indian kitchen.

Read: When Christmas Comes, can Mulled Wine be Far Behind?

Post the pandemic, many have been drawn towards immunity-boosting products. Markets are full of these right now. Playing along similar lines, the team at Grover Zampa decided to take the plunge, and India’s first ever bottled mulled wine infused with wholesome properties of a good ol’ kadha was launched last month.

“In the world of new normal, consumers and situations are changing and evolving each day,” explains Jaiswal. “With the onset of the coronavirus, there was a rise in consumption of Ayurvedic remedies and herbal immunity boosters in India. Kadha undoubtedly has been “The Drink of 2020” replacing all the possible drinks in the market. This very thought struck my mind on the similarities of a few common spice ingredients used to make mulled wine and kadha. The concept of mulled wine best complemented the winter season. There wasn’t a better time to introduce this wine in India.”

As north India battles one of the harshest winters this year, and close-knit gatherings become increasingly common, the wine serves as a concoction of warmth, friendliness and familiar flavours all served in a glass.

The wine has been in the market for exactly a month and according to Jaiswal, the response has been phenomenal. “I believe that the momentum will be there till March, post which the weather will get warm. But given the benefit of wine drank in moderation, and the concoction of herbs and spices, maybe the drink can become an all-season champ.”

On asking about the changed outlook towards alcoholic beverages, Jaiswal says, ”Global Alco Bev markets and brands have been subjected to massive volatility, including the mass shutdown of the on-premise stores in many countries. Owing to lockdown and travel restrictions, a lot of wine connoisseurs have developed a taste for local premium wines. I believe that a lot of imported wine consumers will swiftly move towards fine domestic wines such as our La Reserve, VA Collection, Chene, and Insignia promoting the concept of consuming local wines.”

With an eye on consumers between mid-20s to mid-40s, the wine is currently available at top retail stores in Karnataka, Maharashtra (Mumbai and Pune), Delhi and online stores. It will be available in other markets soon. Cacio e pepe with the Qutub Minar for a view anyone?

Looking for holiday gift inspiration? These 11 gift ideas — all Bay Area made or inspired — offer all sorts of ways to help your favorite foodie, … END_OF_DOCUMENT_TOKEN_TO_BE_REPLACED

Well, anything that French wines can do, the muscadine can do better. Studies at Mississippi State University indicate that two fluid ounces of … END_OF_DOCUMENT_TOKEN_TO_BE_REPLACED

When decision-makers consider implementing Internet of Things (IoT) solutions, they typically want assurance that their investments will pay off and … END_OF_DOCUMENT_TOKEN_TO_BE_REPLACED