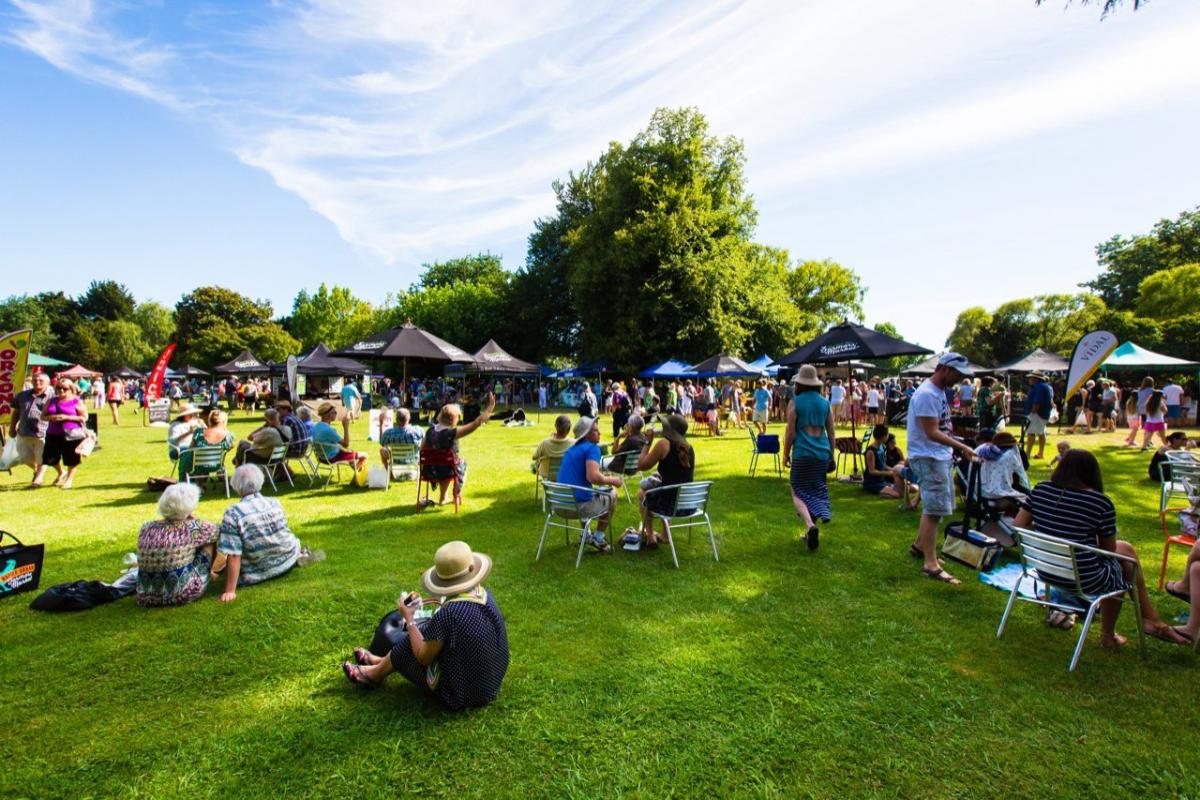 Like many other New Zealanders this summer we’ve been travelling around the country and have been fascinated by the regional variety of what is available at farmers’ markets and roadside stalls.

On recent North Island travels in our motorhome, melons and blueberries were the offerings round Whakatane in early January, a couple of weeks later in Gisborne almost every roadside stall offered oranges, mandarins, tangelos, avocados, cobs of corn and sometimes eggs, while in Hawke’s Bay melons, berries of all sorts, stone fruit, free-range eggs and again corn, as well as more niche produce such as figs, artisan cheese and chocolate.

Hawke’s Bay celebrates its food and wine perhaps more than any other region. ‘‘Great things grow here’’ is a motto seen in many places.

Drive or cycle around the fertile plains of Hawke’s Bay and you’ll see food growing almost everywhere — apple orchards are popping up all over the place, often replacing vineyards on lesser sites. Large wooden crates stacked along fence lines proclaim they are ready for harvest. Rows of neatly trimmed grapevines, many already covered by nets in mid-February, march through the vineyards, maize stands tall and green, and cows and sheep graze quietly in dry paddocks.

Driving between the twin cities of Napier and Hastings and the surrounding settlements such as Clive or Esk Valley, you come across stalls selling fruit — peaches, nectarines, apricots, plums, pears, apples, melons, strawberries, blueberries and figs, or vegetables, eggs, cheese, or honey.

This bounty and more can also be found in the three local farmers’ markets, where you can explore the flavours and products of the artisan producers and growers.

The main one, which recently celebrated its 20th anniversary, is in the Hastings showgrounds on Sunday mornings. With between 60 and 65 stalls spread around a large grassy area, it attracts around 3500 people who enjoy coffee or brunch in the lazy Sunday morning picnic atmosphere while doing their shopping.

There’s also a smaller urban market in Clive Square in Napier on Saturday mornings with between 18 and 24 stalls. This is more of a shoppers’ market although people still relax and enjoy coffee and the buskers while doing their weekly shopping.

Just outside Havelock North, also on Saturday mornings, is a boutique growers’ market at Black Barn, a vineyard complex which also has a cafe, deli, function centre and an amphitheatre for performances.

I particularly loved exploring the range of flavours and types of cheese offered by the three artisan cheese makers at the markets.

Origin Earth, a small milk, yoghurt and cheese producer, started about 10 years ago. Its whole, non-homogenised milk can be found in some local supermarkets and its cow and sheep cheeses at the farmers’ market. Their Pink and White Terraces washed-rind cheese is deliciously pungent but not too strong, and the pecorino sheep’s cheese aged and flavoursome.

Annie and Geoff Nieuwenhuis make farmstead goat’s cheese, from the grass they grow, the goats they raise and milk and the cheese they make and sell. Their cheeses range from fresh, pure white and delicately flavoured, through brie styles, washed rind and a delicious aged cheese.

Hohepa makes cheese from its own biodynamic dairy farm. The semi-soft, yellow danbo is its signature, but there are many others, including a delicious creamy blue and a hand-stretched mozzarella ball, ideal for caprese salad of tomatoes, basil, mozzarella and extra-virgin olive oil — all of which can be found at the market in summer. Hohepa also has its own farm shop just north of Clive.

At the market you’ll also find meat and charcuterie, sausages, salamis, bacons and other cured products, several bread bakers as well as patisserie and sweet treats, freshly squeezed juice, avocados, oranges, olives, olive oil, hemp oil and wine. Several of the region’s smaller wine producers, such as Maison Noire, Hawkes Ridge, Tukipo River Estate and Petane Station, use their market stalls as their cellar doors where you can taste and buy wine.

However, I didn’t see a fish stall. Nevertheless local, sustainably caught fish can be found at Tangaroa Seafoods down by the Ahuriri waterfront.

But above all, Hawke’s Bay is known as a wine destination, and around the region, linked by flat, well-signposted cycle trails, are a number of cellar doors offering tastings and food.

The region is known for delicious chardonnays and red wines, merlot, cabernet sauvignon blends and syrah but there are many other varieties to explore also: pinot gris, sauvignon blanc, malbec, cabernet franc, and even lesser-known ones like chenin blanc, the southern Italian fiano, and the Spanish duo, albarino and tempranillo.

It’s been hard for Hawke’s Bay to sell its bigger reds recently as fashion has veered towards lighter reds like pinot noir, according to John Hancock formerly winemaker of Morton Estate and later Trinity Hill. Now with his son Willie he is working at Moana Park Estate, which is under new ownership, and has also launched his own small label, Hancock and Sons.

However, producers are responding by producing lighter styles, especially very drinkable cabernet franc, and of course lots of rose, which is hugely popular.

In any case, cellar doors both in Hawke’s Bay and Gisborne have generally been busier than in previous summers because of the numbers of New Zealanders holidaying in their own country.

Home Videos The WORLD of WINE – Wine News. Cheap wine, tasting notes and cooking with wine The World of Wine – May 2021 … END_OF_DOCUMENT_TOKEN_TO_BE_REPLACED

How to visit Napa Valley on a Budget. In this video Carson and I explain a few ways to enjoy Napa on the cheap. Tip and advice about how to visit Napa … END_OF_DOCUMENT_TOKEN_TO_BE_REPLACED

Home Videos Get To Know Argentina Wine | Wine Folly If you love Malbec, Argentina is your ultimate wine region. But that’s not … END_OF_DOCUMENT_TOKEN_TO_BE_REPLACED