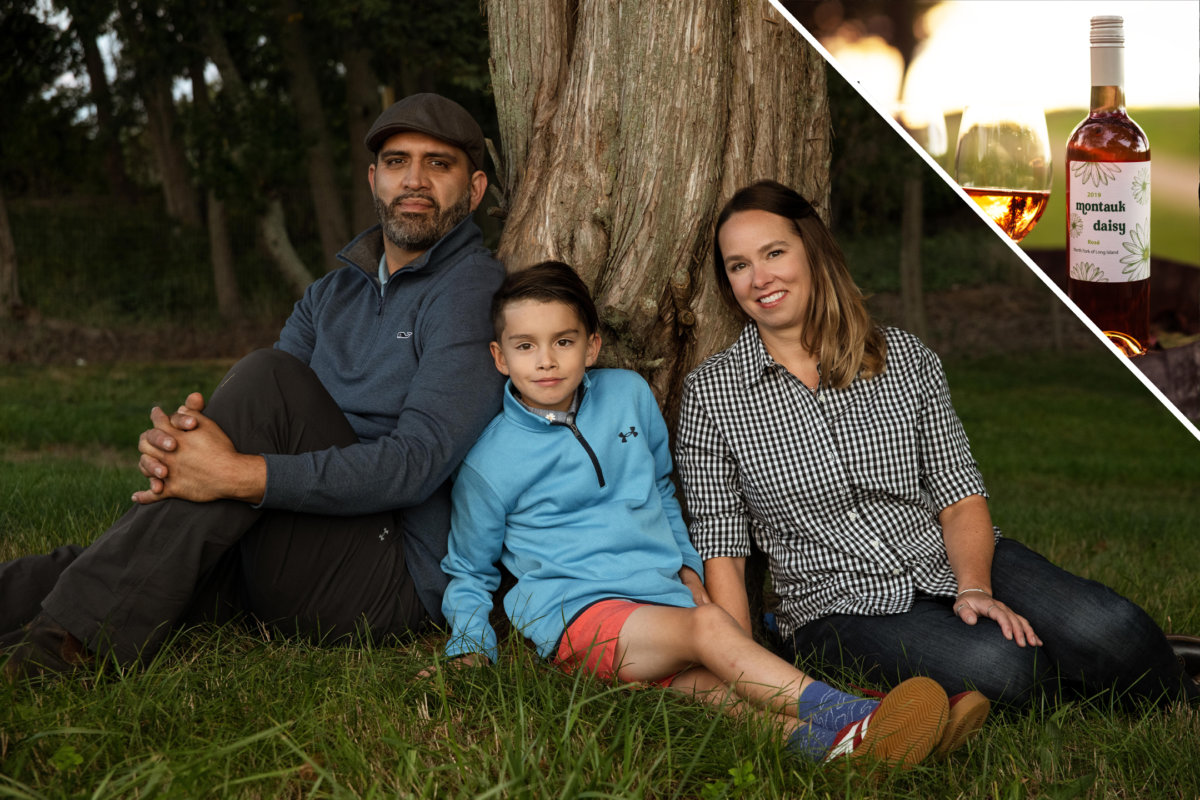 At the heart of the East End’s newest wine label, Montauk Daisy, lies a story of two partners in business and in life who spent over a decade at Pellegrini Vineyards, Martha Clara and other local wineries gathering the skills they’d need to create a wine label uniquely theirs.

Juan Micieli-Martinez jumped into the wine industry right after graduating college in 1999 when he took a job at the Pellegrini Vineyards tasting room. There, he quickly moved into the cellar before switching to Southampton Publick House, where he became Assistant Brewmaster in 2000. His time away from wine was short-lived though, as he joined Mattituck’s Premium Wine Group the next year. After working a harvest at Houghton Winery in Australia, he returned to Pellegrini Vineyards in 2002, now as the production winemaker.

Born and raised in New Orleans, Bridget first visited New York as an art major scouting the land with her Long Island-based boyfriend and decided to move to the island post-college. Her art aspirations evolved into a desire to learn more about the wine industry, which flourished during her time working at the Pellegrini Vineyards tasting bar.

“Pellegrini was the foundation of the interest, because I realized that this wasn’t just an intoxicating beverage, this is a living entity in a bottle, and it’s going to change and age,” Bridget says. “I found that really interesting and wanted to learn more about it.”

Juan and Bridget first met during her tenure at Pellegrini, at which point they were both seeing other people, and sparks didn’t fly right away. “Let’s just say we did not have a very good first encounter. In fact, we both very much disliked one another,” Juan says with a chuckle.

“He was a little bit serious and reserved, and I was a little bit loud and excitable,” Bridget adds, noting that it was some time before they reconnected and developed a friendship. “It was definitely a Jane Austen kind of thing.”

By the time they started dating around 2003, Bridget had joined the newly formed Martha Clara Vineyards to manage their PR and events, hosting grand festivals of more than 2,000 people with acts including the legendary Jimmy Buffett. After three years at Martha Clara, Bridget was wooed by Bob Palmer to join Palmer Vineyard, where she worked for nearly a decade as Hospitality Manager and Business Manager until a new opportunity to work at the more education-focused Clovis Point Vineyard opened up in 2015.

The Clovis Point chapter was short-lived, however, as Bridget wanted to devote more time to raising their young son, Benicio. “In my 12 to 14 years or harvests, I got to experience different business models, different marketing strategies, different brand development…I feel very fortunate that I got to work with a lot of very talented individuals who were very open to change and suggestions and new ideas.”

During Bridget’s tenure at Martha Clara, Juan became acquainted with the founding Entenmann family, which eventually led to him being brought on as production winemaker, then head winemaker. Throughout his time there, he received numerous accolades including the Jefferson Trophy for the best wine on the East Coast and the Governor’s Cup awarded for the best wine in New York State. While Bridget was there at the beginning of Martha Clara, helping them establish themselves in the East End wine region, Juan was there at the end, with his 10-year tenure concluding with the sale of Martha Clara in 2018.

“I grew a lot as a winemaker and as a person, and I eventually became the general manager, as well. It was a great run,” Juan says. “When it concluded, I knew I’d be starting my next phase, but I didn’t know what that would be….  When you get involved in the wine industry there’s always this kind of dream in the back of your head to have your own brand or have your own winery, and we’ve embarked upon that now. Had I still been with Martha Clara—had things not changed—we probably wouldn’t be doing what we’re doing now.”

With the push they needed to begin concocting their own wine label, Juan reached out to fellow Premium Wine Group members Mineo Shimura and Theresa Dilworth, owners of Le Clos Therese Vineyard in Aquebogue, who had been looking for someone to partially take the vineyard over. The four comprise the Montauk Daisy team, each serving a unique function in the operation—Juan is the winemaker, Bridget is skilled at marketing and PR, Shimura is devoted to the care of the vineyard and Dilworth is an expert at the legal side of the wine industry. “We all bring this unique skill set to the table, which really makes Montauk Daisy have a better chance of succeeding,” Juan says.

Le Clos Therese is set up similarly to a meter-by-meter European vineyard, with rows too narrow for mechanical tools, requiring most work to be done by hand, and a higher overall vine density than many local vineyards. While each vine holds less fruit, it allows for a smoother ripening process. “Sometimes people look at a vineyard like that and say, ‘Oh, I want nothing to do with that,’” Juan says. “Well, that’s exactly the reason why I love it, because it’s not like other vineyards on Long Island.” There is currently no tasting room, but the team hopes to remedy that in the future.

Montauk Daisy’s two debut wines, a 2019 rosé and a 2019 Chardonnay, hit the market in the final weeks of 2020 and quickly set themselves apart from the similar varietals. The rosé is a blend of merlot and cabernet sauvignon made with a technique that, rather than picking each grape variety as they ripen and fermenting them, picks the fruit around the same time (late for merlot and early for cabernet sauvignon) and blends them in the fields as they’re getting picked. The Chardonnay is incredibly expressive and savory for its kind and encapsulates the overlooked potential of the varietal. “Chardonnay is one of the varietals that’s not in demand and not popular, but on Long Island, and it’s just so special,” Bridget remarks. The 2019 red wine is expected to be released by late summer, with the 2020 class of white, red and rosé on the horizon for 2021, as well.

“When you go into a wine shop, you’re really competing with some big producers out there, so it’s a daunting task—the wine industry—but you do it because you love it,” Juan says, adding that, “for somebody to take their hard-earned dollars and buy something from you, and then tell you how good it is, that’s worth 20 awards!”

Juan and Bridget hope to maintain wine education as one of the cornerstones of Montauk Daisy, and they have plans to provide wine lovers the chance to learn about the winemaking process and industry, as well as beekeeping lessons courtesy of Dilworth. And rumor has it that a private vine club will kick off in spring/summer 2022.

“It’s really satisfying to be able to work with my husband on something that I feel like I have very little creative restrictions on,” Bridget adds. “I have a job where I get to be creative, hang out with my best friend, come up with ideas and try to illustrate those ideas. That’s pretty fun, and not only that, but we get to share it with people!”

Visit montaukdaisy.com to purchase wine and subscribe to the newsletter for news about wines events, new releases and more.

Home Videos The WORLD of WINE – Wine News. Cheap wine, tasting notes and cooking with wine The World of Wine – May 2021 … END_OF_DOCUMENT_TOKEN_TO_BE_REPLACED

How to visit Napa Valley on a Budget. In this video Carson and I explain a few ways to enjoy Napa on the cheap. Tip and advice about how to visit Napa … END_OF_DOCUMENT_TOKEN_TO_BE_REPLACED

Home Videos Get To Know Argentina Wine | Wine Folly If you love Malbec, Argentina is your ultimate wine region. But that’s not … END_OF_DOCUMENT_TOKEN_TO_BE_REPLACED