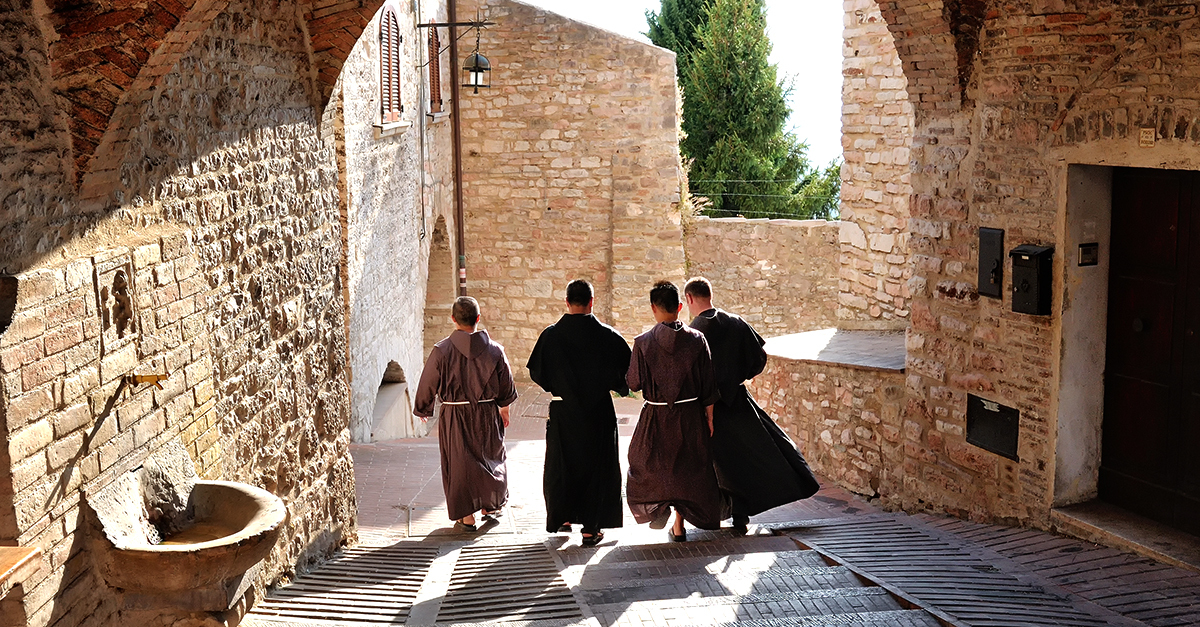 Praying. Contemplating. Spending time in silence. Monks live a simple life, one some of us can be hard-pressed to relate to.

Think your life bears no parallels to these men of God? Think again — and thank them for some of your favorite beverages. Centuries after they first began making alcoholic beverages and caffeinated brews, modern monks are making ancient feel new again with fresh takes on whisky, wine, coffee and beer.

The shift many distilleries have made during the global pandemic, producing hand sanitizer instead of spirits, is coming full circle. Back in 1494, when the earliest written reference to what’s now known as whiskey — apparently made by Friar John Cor — was recorded in the Scottish king’s tax record, monasteries were producing the stuff as a health tonic for the sick. Monks wrote long lists of its health-giving properties during the 15th century, including the “miraculous things” it could do if you rubbed it on your hands. Human nature being what it is, some monk must have said “Let’s taste it” along the way — and from there, they started perfecting it.

Perfecting what’s known as Scotch whisky today is exactly what Andrew McKenzie Smith, founder of Lindores Abbey Distillery, has set out to do. He’s not a monk, but he resides on the farm where the first whisky-making monks lived. When his great-grandfather first bought the land, the family was “blissfully unaware” of the connection back to 1494, says Smith. Then, they started receiving emails from whisky groups asking why a place with such history was, with no disrespect, “a falling down old farm,” Smith explains. He agreed, and that’s what sparked him to lead a fundraising effort to return “the spiritual home of Scotch whisky” to its roots and open a new distillery there.

“With the weight of that history behind me, raising about 10 million pounds [about $13 million] wasn’t that difficult, purely because of where we were,” Smith says.

All the stars aligned to make it happen. This December, Lindores Abbey Distillery’s first Scotch whisky will be released to its members (and next summer to the public). It’s been selling its base spirit, aqua vitae, which was first made at Lindores Abbey centuries ago, since it opened in 2017. Smith likes to think the taste is remarkably similar to that which was first made here in 1494.

“We’re growing barley in the same fields the monks tended, we’re using the same water, and we’re under the same sunshine,” says Smith. “As close as possible, we’re reliving what Friar John Cor did back in 1494.”

During the pandemic, Lindores Abbey Distillery made and gave away hand sanitizer to a nearby village. It also donated extra distiller’s yeast, which would have gone to waste when distilling was halted, to village bakeries. “You had all this bread,” says former chef Smith, “that smelled slightly of alcohol.” But it was delicious, nonetheless, he says.

Holy Wine You Can’t Get Outside of Cannes

While Smith is reading history books to fine-tune his recipe and replicate the original Scottish monks’ spirits, the monks of Lérins Abbey on Saint-Honorat island in the south of France need not look further than their own ancestors. The 21 monks who today make up the Cistercian Congregation of the Immaculate Conception are still very much involved in the monastic tradition of making wine that’s spanned more than 16 centuries.

Across the Abbey’s 8-hectare (about 20 acres) wine estate, the monks grow grapes such as Chardonnay and Viognier to produce four white wines, and Syrah and Mourvedre for three different reds. Production is around 35,000 bottles a year, according to Dominique Vion‚ head sommelier at La Palme d’Or at Hotel Martinez, a two-Michelin-star restaurant in Cannes (just two minutes away by boat, Vion says).

Vion first tasted wines from Lérins Abbey early in his career as a sommelier about 20 years ago. He loved them immediately, which is why they’re still on the menu at La Palme d’Or. “The wines are good compositions, complex in their youth and rich, which [gives] great aging potential to the vintages,” he says.

While the technology has evolved (for instance, the winery now has modern equipment, employs organic farming techniques, and works with a civilian oenologist), the monks remain active in their work in the vineyard, and the wines retain their exclusivity and a keen sense of place. Take-away sales from the restaurant are not allowed, but you can buy the bottles at a few merchants in Cannes, as well as from the Abbey directly. The first Friday of every month, they offer an excursion that takes guests via boat from Cannes to Saint-Honorat for a 15-minute vineyard tour, followed by a tasting of several wines. Seasonally, guests can also enjoy lunch on the island at the monks’ La Tonnelle restaurant.

Across the pond, at New Clairvaux Vineyard in tiny Vina, Calif., Aimée Sunseri is also enlisting the help of monks. As a fifth-generation winemaker, she’s been the head winemaker here for 17 years but works closely with the vineyard manager, Brother Luis Cortez, who’s part of The Abbey of Our Lady of New Clairvaux. The 16 monks who live here happily cultivate the vineyard, handle the harvesting, and crush the grapes used to make everything from Tempranillo to Sauvignon Blanc wines.

“We try to be as involved as we possibly can because manual labor is a key Cistercian principal — a spiritual source of empowerment and glorification for God,” says Brother Luis. They worship by participating and collaborating in creation, and making wine is part of that divine collaboration, he adds.

Though they follow many of the same principles of winemaking developed by the Cistercians during medieval times, they’re also bringing in fresh perspective (another Cistercian principle: bringing new ideas to new lands). Sunseri says it’s the first vineyard in the United States to plant two Greek varietals, Assyrtiko and Moschofilero. The pandemic has also forced them to get creative, including moving their tasting room outside.

Brother Luis, who says he starts each day in prayer and communion with a sip of New Clairvaux’s Angelica, says the change has been a positive one for customers, who appreciate being outside and hearing the birds while tasting their wines. “We’ve always embraced that tranquil environment, but it’s amplified with us being forced to be outside,” he says. “[Being outdoors] is a huge part of our life here, so this is a beautiful thing that came out of struggles of the pandemic.”

Yes, Monks Are Even Making Coffee

As legend goes, according to the National Coffee Association, it was a goat herder in Ethiopia who first discovered the power of coffee, noticing his goats were too energetic to sleep after eating beans from a particular tree. He shared his findings with a local monastery, where the monks then made a drink from the berries — the first known coffee — to keep them alert through long hours of evening prayer.

You better believe monks are keeping this tradition alive today, and none are more enthusiastic about it than the modern Carmelite Monks, a Roman Catholic community residing in northwestern Wyoming. They pay homage to monks’ history with coffee by roasting and selling their own beans as a means of supporting themselves, a business that began back in 2007.

The monastery claims that 85 percent of orders are from repeat customers, which is why they’ve expanded their offerings through Mystic Monks Coffee beyond the original bagged beans. They offer coffee-of-the-month subscriptions (in flavors like chocolate cherry, butterscotch cream, and Snickering Monk Candy Bar), as well as single-serve pods called Monk-Shots, loose-leaf tea, and unique double-handled mugs, representative of the Carmelite tradition of drinking coffee with both hands in celebration of the harvest.

Of course, beer is perhaps the best-known lifeline among enterprising monks. But beyond Belgium and the Trappist breweries throughout Europe, there’s one right here in the States. After making and selling jams and jellies for more than 60 years to support their community, the monks of Saint Joseph’s Abbey outside Spencer, Mass., began to realize that to stay on the property with 50 monks, they’d need an alternative source of income. That’s where beer came into the picture. When it came time to decide whether to take the plunge, “we had the greatest majority vote for anything we ever did,” recalls Father Isaac Keeley.

In case you’re wondering, monks do drink beer (though they don’t eat meat). But before they had their own brewery, the monastery would enjoy alcohol only sparingly, at big feasts or holidays, says Father Isaac. Once he got into researching beer — in particular, after enjoying a tall glass of St. Bernardus at a local tavern — he realized what they’d been missing. “I scandalize some beer aficionados, but that was the day I discovered beer can really be a lot more than the ‘Clydesdales beer,’” he says.

The monks enlisted the help of a few local brewers — as well as a monk who trained at a Trappist brewery in Belgium — to help them build a process and brewery that would align with the traditional Trappist rules. The first brew they released, Spencer Trappist Ale, was inspired by patersbier (Latin for “father’s beer”). Normally, this style has a low alcohol content around 4.5 percent, but Father Isaac says he knew that if they wanted to sell any to the public, they’d need a higher alcohol content. The result was a 6.5 percent beer that he describes as having a hue “the color of sunrise at Nauset Beach on Cape Cod on the third Monday of September.”

Needless to say, he’s learned a lot about beer since growing from a “helper” on the project to director of Spencer Brewery. He’s also had to get creative during Covid-19 when sales of draft beer came to a screeching halt, he says. The upside is that for the first half of 2020, packaged-beer sales were slightly ahead of the same period last year, and they’re continuing to bring in revenue for the monastery by contracting out their brewery space, currently larger than they need, to other local brewers.

The monastery itself is still closed at press time, but Father Isaac is already brainstorming how he can expand when things begin to normalize. “It’s a crazy journey for a contemplative monk to be doing this,” he says, “but it’s stretched me so much.”

Home Videos The WORLD of WINE – Wine News. Cheap wine, tasting notes and cooking with wine The World of Wine – May 2021 … END_OF_DOCUMENT_TOKEN_TO_BE_REPLACED

How to visit Napa Valley on a Budget. In this video Carson and I explain a few ways to enjoy Napa on the cheap. Tip and advice about how to visit Napa … END_OF_DOCUMENT_TOKEN_TO_BE_REPLACED

Home Videos Get To Know Argentina Wine | Wine Folly If you love Malbec, Argentina is your ultimate wine region. But that’s not … END_OF_DOCUMENT_TOKEN_TO_BE_REPLACED