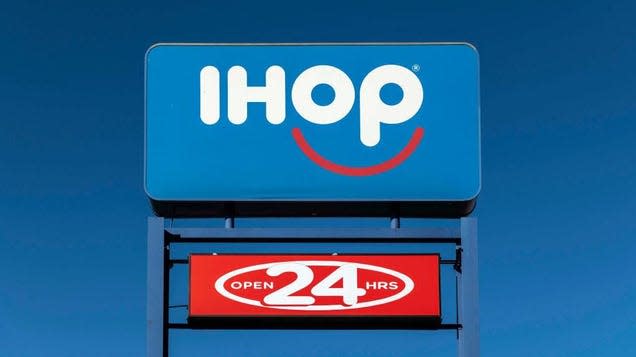 In a move that’s sure to delight way too many people, IHOP is adding booze to the menu at select locations. But settle down—there won’t be bloody Marys just yet. For now, the restaurant chain will serve beer, wine, and bubbly. (Toss some seltzer in, please.) CNN reports that for the very first time, IHOP is giving its franchise owners the option to add an alcohol menu designed by the company.

It’s worth noting that some IHOP franchisees have already been selling alcoholic beverages on their own, but it’s been their responsibility to pick the menu and manage the offerings themselves. If this beverage program rolls out at a location near you, expect to see beer like Blue Moon, Bud Light, and Corona, along with Barefoot wine varieties such as Bubbly Brut, Bubbly Chardonnay, and Cabernet Sauvignon. There will be no hard liquor, as IHOP is trying to preserve the family restaurant feeling and avoid a bar-like atmosphere. No pancake fights for you!

IHOP’s hope is to get more business during non-breakfast hours, and if you remember, it has already tried various strategies to do this: most recently, it announced a Chipotle-style pancake bar concept called Flip’d. Then there was that whole jokey-looking “IHOB” rebrand that we all secretly knew, deep within ourselves, couldn’t be real—but the brand’s expansion into burger territory showed a desire to break out of its breakfast rut.

Right now the booze concept is in testing mode, and the first three restaurants to adopt the alcohol menu are doing so on a voluntarily basis. Two are in New Mexico, and one location in San Diego will be offering alcohol in September. I wouldn’t be surprised to see if this took off in many markets; alcohol has a higher profit margin than food, so franchise owners stand to make some money.

IHOP President Jay Johns confirmed to CNN Business that if this test run goes well, “we’ll hit the gas pedal and we’ll go much faster.” It’s likely not every restaurant will be suited to carry alcohol; Johns estimates that up to 1,000 out of 1,750 locations might eventually serve booze. It’s not just a plug-and-play operation, because IHOP has to convince franchise owners that the additional investment on their part is going to be worth it, with liquor licenses and staff training. And if that involves hiring new staff members, that might not be so easy at the moment. Are there any other chain diners you’d like to see serve alcohol? Denny’s? Waffle House? Waffle House is a good one.

Home Videos The WORLD of WINE – Wine News. Cheap wine, tasting notes and cooking with wine The World of Wine – May 2021 … END_OF_DOCUMENT_TOKEN_TO_BE_REPLACED

How to visit Napa Valley on a Budget. In this video Carson and I explain a few ways to enjoy Napa on the cheap. Tip and advice about how to visit Napa … END_OF_DOCUMENT_TOKEN_TO_BE_REPLACED

Home Videos Get To Know Argentina Wine | Wine Folly If you love Malbec, Argentina is your ultimate wine region. But that’s not … END_OF_DOCUMENT_TOKEN_TO_BE_REPLACED