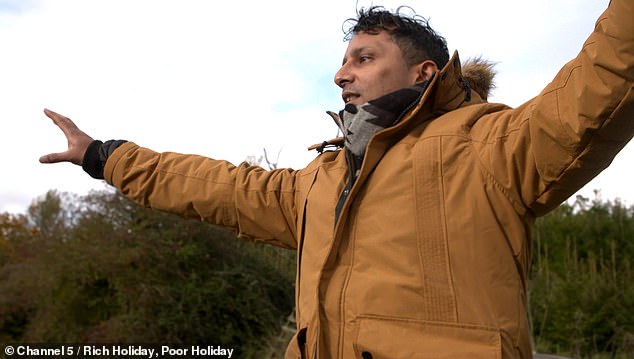 A multi-millionaire used to the finer things in life is forced to spend a week at a rainy campsite as he and his friend swap holidays with two unemployed single mothers in Channel 5’s Rich Holiday, Poor Holiday.

Sunil, 32, who splits his time between the UK and Dubai, is joined by best friend Nilesh on the £780 getaway in Wiltshire, while friends Suzanne and Ursula, who usually have to count the pennies at home in London, enjoy a lavish £8,000 trip to Portugal.

Sunil and Nilesh try to stay positive after struggling to pitch their tent in a muddy field but end up cheating with a night in a nearby hotel after failing to start a fire while spending a night in the woods on a survival course.

Meanwhile, Suzanne and Ursula are shocked that their ‘boring’ stay in a luxury manor house with a wine tasting experience and gourmet seven-course meal costs nearly £9,000, and say they could have put that money to better use.

Sunil, 32, from Kingston, left, made his millions in the car business and while he grew up in poverty, he and his best-friend Nilesh, right have grown accustomed to expensive tastes. However, the pair swap their expensive holiday for a camping trip in Wiltshire, where they attend a survival course

The two men are using to five-star hotels, but Sunil’s scrambled eggs under the rain will have to do on their skint trip where they have a budget of £130 for the week

Introducing himself, Sunil explains he is like an eagle who ‘flies in his own lane, never flies with the chickens.’

Having lost both his parents at a young age, Sunil had to step up and learn how to pay the bills, which taught him resilience that stood him in good stead as he built a career in the car industry.

He and Nilesh explain they think nothing of spending £10,000 on a week away and say they have forgotten how to slum it on a budget holiday.

‘I can be reminded of the holidays I used to go with my mates, 20, 30 years ago when they were low budget,’ he admits while preparing for the trip.

Ahead of his getaway, Sunil says his worst holiday would be to be ‘stuck in the rain, having chores to do, like camping.’

Unfortunately for him, his nightmares come true. The pair drive Sunil’s Bentley to a campsite in Wiltshire, where they are given a budget of £130 to entertain themselves for the week.

‘We just need some good weather, it’ll be a laugh,’ Sunil says, trying to be optimistic.

Nilesh, left and Sunil, right, are more used to three-piece suits than pitching their tents in the wilderness

Sunil and Nilesh spend four hours trying to pitch their tend in a field, but the tent end up falling overnight

The businessman, pictured, who had a tough upbringing, rises to the challenge and compares himself to Rambo

Sunil and Nilesh struggle with their camping trip, even though they try to keep a positive attitude throughout and even befriend the local animals

The two men start to pitch their tents as it starts to get dark but are not successful, and after four hours, the tents are still nowhere near ready.

Finally, the pair settle for the night, with Sunil saying: ‘Even the Egyptians who built the pyramids would be proud of those two tents.’

However, the next day, he admits the tents fell on them overnight. Sunil’s prayer for good weather is not answered, and the friends wake up to the rain and are forced to eat breakfast outside in the drizzle.

They are not impressed with the muddy field, with Sunil saying, ‘hippos and pigs would love it.’

Things go from bad to worse when the pair head to the woods for a survival course. They are shown how to build a shelter out of scavenged materials and light a fire to survive the night.

Suzanne and Ursula, who hate extreme sport, struggle through some extremely fast driving in the Portuguese hills

After several tries, neither Sunil nor Nilesh managed to light a fire without a match, and the pair decide to retreat to a comfortable hotel nearby

However, after a sound night and a hearty English breakfast, the pair decide to head back to their campsite to finish the experience.

‘Everything I do, I finish strong,’ a determined Sunil tells a less convinced Nilesh.

Upon returning to their campsite, Sunil is dismayed to find animals found their way into his tent overnight.

At the end of the trip, Sunil says: ‘I’m definitely proud of the achievement we’ve done as a team. We made a life-long memory, the best we could have done with the resources we’ve had.’

AUrsula admits she is born by a wine-tasting course during the expensive £9,000 holiday, and says she’d rather get a drink with the locals

Meanwhile Nilesh adds: ‘The most I enjoyed in this holiday is the company of my brother Sunil.’

But best-friends Suzanne and Ursula are less impressed with their expensive Portugal getaway, which amounts to £8,995.

The two women, who are currently unemployed, came together after dating ‘bad boyfriends.

Ursula lost her job in March last year due to the coronavirus pandemic and has been applying to jobs ever since. Meanwhile, Suzanne explains she went from being with the same partner for 14 years and holding a good job in the city to being a single mother scraping for cash.

The two friends are used to small getaways and say they love to experience the local culture.

Ursula is scared of heights and struggles through a hot air balloon trip. After an emergency landing due to adverse winds, the two friends land in Spain and laugh the whole thing off

The view is incomparable, but Ursula and Suzanne admit they would have rather spent their holiday doing something else than their hot air balloon trip

They are put up in a five-star manor hotel in Portugal and say they love the ‘amazing’ view but find an exclusive wine tasting class they attend ‘boring,’ and admit they’d have had more fun getting a drink with the locals at the nearby village.

The pair, who don’t enjoy extreme sports, are put to the test on a driving quad course in the hills and later sample a seven-course tasting menu that leaves them feeling ‘peckish’ and longing for more ‘authentic’ cuisine.

The pair are also left dissatisfied with a hot air balloon trip which results in an emergency landing on the other side of the Spanish border and a taxi back to the hotel.

Their favourite moment of the trip, however, is when they encounter a group of traditional dancers around the hotel, and get to enjoy an impromptu show.

When the price of their Portugal trip is revealed, Ursula is not impressed.

‘I wouldn’t pay eight grand, I could put that money to a lot more use,’ she says.

However, in spite of their set-backs, the two women head back to London feeling ‘re-energised’ and motivated to get back on the job market, with Ursula saying she’s taken ‘a lot of positivity’ from the experience.

Home Videos The WORLD of WINE – Wine News. Cheap wine, tasting notes and cooking with wine The World of Wine – May 2021 … END_OF_DOCUMENT_TOKEN_TO_BE_REPLACED

How to visit Napa Valley on a Budget. In this video Carson and I explain a few ways to enjoy Napa on the cheap. Tip and advice about how to visit Napa … END_OF_DOCUMENT_TOKEN_TO_BE_REPLACED

Home Videos Get To Know Argentina Wine | Wine Folly If you love Malbec, Argentina is your ultimate wine region. But that’s not … END_OF_DOCUMENT_TOKEN_TO_BE_REPLACED