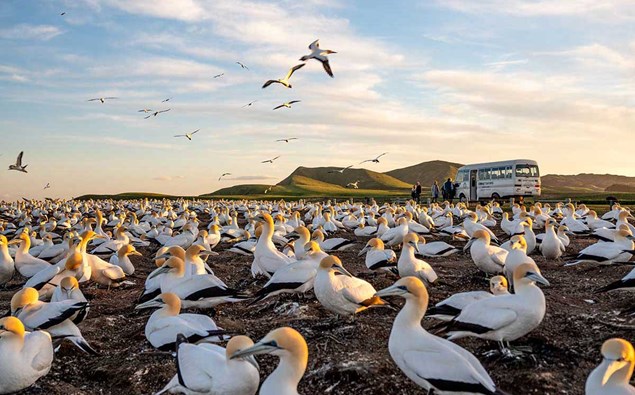 It’s a feathered frenzy of preening birds, theatrical mating rituals and rampant adultery. Pinned to the ocean edge of Cape Kidnappers, it’s the largest and most accessible mainland gannet colony in the world. Its very name is steeped in historic drama, stemming back to Captain Cook’s visit in 1769 and the young Tahitian he had on board the Endeavour, employed as his translator. As the young Polynesian interpreter tried to negotiate with local Maori for fresh provisions and water, they wrongly assumed that he’d been imprisoned. Tragically the misunderstanding forced Cook to fire his cannon, killing two Maori warriors, as they tried to kidnap him. The young Tahitian managed to escape, making his way back on the ship, prompting Cook to name it Cape Kidnappers. I explored the cape with Gannet Safaris, the award-winning sightseeing company.

My guide for the day was David, a fabulously informative font of wisdom and wit, who had my vanload of fellow passengers in the palm of his hand as he unfurled a wealth of knowledge and incisive anecdotes about the cape. From Te Awanga, as you turn off the coastal road into the station entrance, you’ll discover Julian Robertson and Cape Kidnappers Lodge has invested mega-bucks on tar-sealing and upgrading twenty bridges to tame the rigours of romping across this craggy peninsula. The eastern side of the cape, studded with a 10.5km –long predator proof fence boasts New Zealand’s largest private wildlife sanctuary. Run by 2 fulltime staff and over 300 volunteers, the 5000-acre sanctuary sports the most diverse range of birds, insects and reptiles, including the prized treasure –  a 150-strong kiwi refuge, most of which are brown kiwi and also little spotted. David remarked that since the fence was built in 2007, over 1500 feral cats have been shot on-site.

David stopped to show us the vertiginous cliff named Bank Manager’s Corner, after a banker who was reluctant to lend money for the early development of the farm was ushered closer and closer to the cliff’s edge until he agreed to the loan!  But the tour de force is the intimate encounter with the heaving hordes of Australasian gannets, 20,000 squawking, fornicating and nesting birds. They are members of the Booby family, with distinctive black eye markings and a pale gold crown. The gannets, known as takapu in Maori, have been nesting here since the 1870s. Their lifespan ranges from 25 to 40 years, but their lives are launched in dramatic fashion. The 16 week old chicks, who’ve never been airborne before, ambitiously embark on a 2,800 kilometre Tasman Sea crossing, which averages about 8 days. They will fly to Australia either north of New Zealand or to the south, but they won’t fly overland or through Cook Strait. If they land in their first days of the attempted crossing, they’ll be too fat to fly off again, so it’s a high-stakes trip!

After successfully crossing the Tasman, the birds will stay in Australia in 3-4 years, before attempting the return flight. Only 15% successfully make it home. The boys apparently arrive first, in July, tidying up the nest before the girls start descending.  Not dissimilar to men presenting women with roses as a romantic gesture, the young boys will fly around the girls dangling seaweed from their beaks, slapping it across the girls as a lust-laden offering. How kinky. Our group saw some of the boy birds flapping about with the most ridiculous over-laden hauls of seaweed dangling from their mouths as part of the mating ritual. Apparently the birds don’t nest in earnest until they reach five years of age.  The quaint old saying, like gannets in a gut truck, is vividly brought into sharp and sensory focus, 4D-style, at Plateau Colony, where we stood in awe, just metres from these birds, with their striking black eye markings and pale gold crown.

While many nested in serried rows, some preened and performed various recognition rituals, while others swooped and dived, bringing fish back from the deep sea. The view down to the windswept and wave-lashed Saddle Colony is majestic. David shared a stream of insightful nuggets with us, like the fact that when James Cook came here, his crew had gannet for Christmas, nicknaming it colonial goose. But the biggest and most scandalous discovery was that adultery, divorce and remarriage is rife amongst the gannets. The birds can be seen from September to early April, so the clock is ticking on this season. In September they return from their winter escape to build their nests ready for the arrival of the chicks during December and January.

The chicks are then fattened up ready for their first and departing flight in late April when they go off on their annual ritual to warmer climates. Watch these champion seabirds soar, swoop, dance and dive right before your eyes, before their April departure. Twice daily tours depart at 930am and 130pm from Te Awanga, priced from $88 for adults. www.gannetsafaris.co.nz

Elephant Hill Winery is just a few minutes down the road from Gannet Safaris Overland Depot, so after your tour unwind from your day with a wine tasting and/or a delicious dinner at this beautiful winery. You can sit inside or outside and enjoy fine dining and beautiful Hawkes Bay wine while taking in vineyard and seaviews. I adore their Syrah and Pinot Noir. They’re passionate about caring for the land, treading as lightly as possible on the earth. Elephant Hill has installed their own state-of-the-art biological water treatment system that allows them to recycle winery waste water back into valuable clean water. Wildflowers are planted in the vineyards and creek banks to contribute to the beauty of the property and attract beneficial insects for biodiversity. All Elephant Hill vineyards are 100% accredited by Sustainable Winegrowers of New Zealand. If you fancy having a serious splurge to remember, spoil yourself with a night of supreme luxury at The Farm at Cape Kidnappers. Set on 6,000 acres of stunning pastures in Hawke’s Bay, this world-acclaimed Julian Robertson lodge boasts 180-degree ocean views, a wine cellar with a tasting room, open fireplaces and an infinity pool with a hot tub. Guests enjoy complimentary pre-dinner drinks with hors d’oeuvres, gourmet dinner, full breakfast and a complimentary in-room minibar with domestic beer only.

Strung across rolling farmland and rugged cliffs that give way to vast sea views, this is not just a lodge and spa, but the property also boasts an award-winning Tom Doak-designed golf course and a sanctuary for some of New Zealand’s most precious flora, fauna and endangered animals. The main lodge overlooks the working farm, golf course and Pacific Ocean, and houses the guest lounge, library, wine cellar and snug, providing a variety of options of dining locations. And never short on incredible experiences, activities include exploring the expansive estate on horseback or Can-Am and hiking any of the many walking trails.

The main lodge features lounge and dining spaces, outdoor entertainment areas, a fully equipped fitness centre and a day spa. The luxurious 5-star accommodation options include private suites and a 4-bedroom self-contained cottage. All are air-conditioned and feature a private balcony with views over the ocean and 18-hole golf course. All include an LCD TV, DVD player and in-room safe.

Relax under the shaded poolside cabana, or indulge yourself at The Spa which offers ocean views and a variety of spa treatments such as massages, reflexology, body wraps, facials, pedicures, manicures and hair care. You’ll enjoy gourmet restaurant cuisine from award-winning chefs, showcasing the finest New Zealand lamb and beef, as well as the best local produce and seafood. It’s perfect for honeymoons, special anniversaries and romantic getaways.  Take advantage of the Summertime Special, knocking $420 off the nightly rate per guest, available until 31 March 2021, inclusive, for a minimum two-night stay. Exclusively priced for New Zealand residents only, from $825 + GST per person, per night, on a double/twin occupancy basis. https://www.robertsonlodges.com/

I picked up my Avis rental car from Wellington Airport to free-roam the North Island. The Avis Safety Pledge allows customers to pick up and drop off vehicles with minimal contact. This has been complemented with the Digital Check In option, dramatically speeding-up time at the counter. With so much to explore in New Zealand, if you’re planning a cheeky long weekend road-trip, Avis is currently “third day free” weekend rentals. www.avis.co.nz

Home Videos The WORLD of WINE – Wine News. Cheap wine, tasting notes and cooking with wine The World of Wine – May 2021 … END_OF_DOCUMENT_TOKEN_TO_BE_REPLACED

How to visit Napa Valley on a Budget. In this video Carson and I explain a few ways to enjoy Napa on the cheap. Tip and advice about how to visit Napa … END_OF_DOCUMENT_TOKEN_TO_BE_REPLACED

Home Videos Get To Know Argentina Wine | Wine Folly If you love Malbec, Argentina is your ultimate wine region. But that’s not … END_OF_DOCUMENT_TOKEN_TO_BE_REPLACED