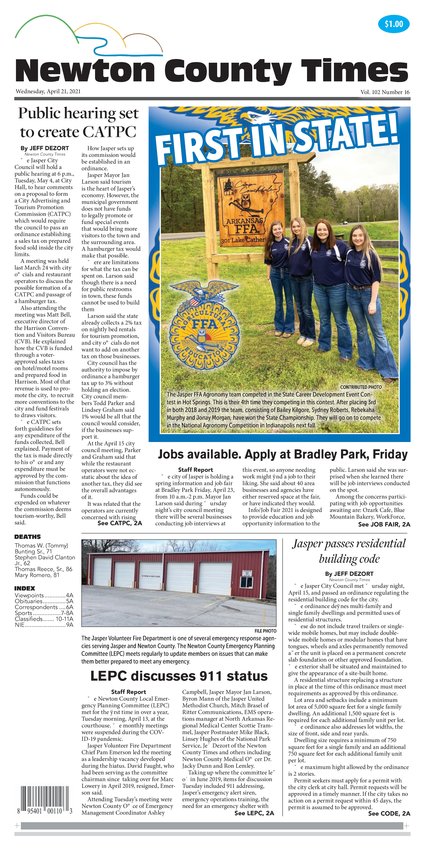 By Mary Hightower U of A System Division of Agriculture

FAYETTEVILLE — In a quiet lab at the Milo J. Shult Agricultural Research and Extension Center, surrounded by wine glasses, Renee Threlfall and John Clark spent time listening — listening for the aromatic and flavor notes Indulgence, Dazzle, Opportunity and Enchantment wines were playing on their palates.
Clark, fruit breeder for the Arkansas Agricultural Experiment Station, developed the grapes from which the wines were made. Threlfall, experiment station research scientist for enology and viticulture, made them into wines to learn how they fared through fermentation and how their color, taste, aromas and mouth feel evolve over time. Together, they brought the grapes to market for Arkansas vineyards and wineries.
The Agricultural Experiment Station is the research arm of the University of Arkansas System Division of Agriculture.
The wine grapes are rooted in the efforts of two distinguished professors and Arkansas natives: the late James N. Moore, founder of the Arkansas fruit breeding program, and the late food scientist Justin Morris, renowned enologist and viticulturist. Opportunity and Enchantment, the first wine grapes developed for Arkansas’ growing conditions, were released in 2016.
They were a long time coming. Moore made the initial selections in 1991 for Opportunity and 1993 for Enchantment. Evaluations of wine production for these grapes has been ongoing for almost three decades.
Clark and Threlfall worked hard toward the patent and release of Opportunity and Enchantment, and followed up with Dazzle and Indulgence, both white wine grapes, in 2020.
“Even though the grapes have been released, there is research ongoing about how the wine changes during storage and how different winemaking techniques impact the wine,” Threlfall said. In the April wine testing, “we evaluated the 2018-2020 Dazzle, the 2017-2020 Indulgence and Enchantment, and the 2020 Opportunity.”
“Renee has refined her winemaking to get them to express themselves,” Clark said.
Tasting the wines from lightest to most substantial, Threlfall said she and Clark began with Opportunity.
“This wine has slight tree fruit aromas and flavors like peach and pear,” she said.
Wines made from Dazzle “have Gewürztraminer attributes, with tropical fruits and sweet spice aroma with a subtle fruity flavor and balanced finish,” Threlfall said. “The aroma was stronger in the 2020 and 2019 wines than the 2018 wine.”
Indulgence wine has a prominent Muscat — also known as Moscato in Italian wines — or sweet floral aroma. Threlfall said Indulgence shows these “especially in the more recent years with floral and fruity flavors and balanced finish.”
“What was pretty nice in our tasting is how the Muscat flavor is holding up over several years. That’s something you don’t know” when that first wine is made from a new grape, Clark said.
Dazzle’s grapes have the perfect chemistry for wine production and potential for late harvest grapes.
“Dazzle, like most white wines, is a wine that can be made and sold quickly without storing too long,” he said. While age is often associated with wine, “not all wines are intended to be made to sit around and age.” White wines fit into the latter category, he said.
“Dazzle and Indulgence are distinctly different in flavor,” Clark said. “They’re two very nice products and that’s important. Businesses need diversification of products.”
Opportunity represents a more mainstream white, he said. “Dazzle has its Gewürztraminer, and Indulgence, its Muscat, but Opportunity is more in the middle of the white category, something like a Chardonnay. It’s much like the Seyval grape, a very popular French-American hybrid. Part of its appeal is that it’s a stable producer and a mainstream wine.”
By contrast, Enchantment, the single red wine grape from the program, produces a wine that has an intense dark purple color and rich flavors.
Enchantment “is a powerhouse of a wine with smoky, dark berry aromas and flavors with vegetative, peppery and smoky notes,” Threlfall said. “We also evaluated this wine with tannins and oak added, finding that this elevated the aroma and flavor of the wine.”
Even with tastings of wines from all four grapes, there is more work to be done, she said. “John and I look forward to showcasing these wines at the Arkansas Association of Grape Growers Conferences in November and other workshops and conferences in the region.”
“The evaluations of the winemaking styles will continue with the 2021 harvest, so luckily there is more wine tasting in our future,” Threlfall said.
Clark added to the ambiance during the tasting. An accomplished composer and guitarist, Clark accompanied the tasting by playing parts of his new themes for Dazzle and Indulgence. Over the years, Clark has composed the music for education videos about new fruit varieties. Those videos can be found https://www.youtube.com/user/TheAAES.

Home Videos The WORLD of WINE – Wine News. Cheap wine, tasting notes and cooking with wine The World of Wine – May 2021 … END_OF_DOCUMENT_TOKEN_TO_BE_REPLACED

How to visit Napa Valley on a Budget. In this video Carson and I explain a few ways to enjoy Napa on the cheap. Tip and advice about how to visit Napa … END_OF_DOCUMENT_TOKEN_TO_BE_REPLACED

Home Videos Get To Know Argentina Wine | Wine Folly If you love Malbec, Argentina is your ultimate wine region. But that’s not … END_OF_DOCUMENT_TOKEN_TO_BE_REPLACED