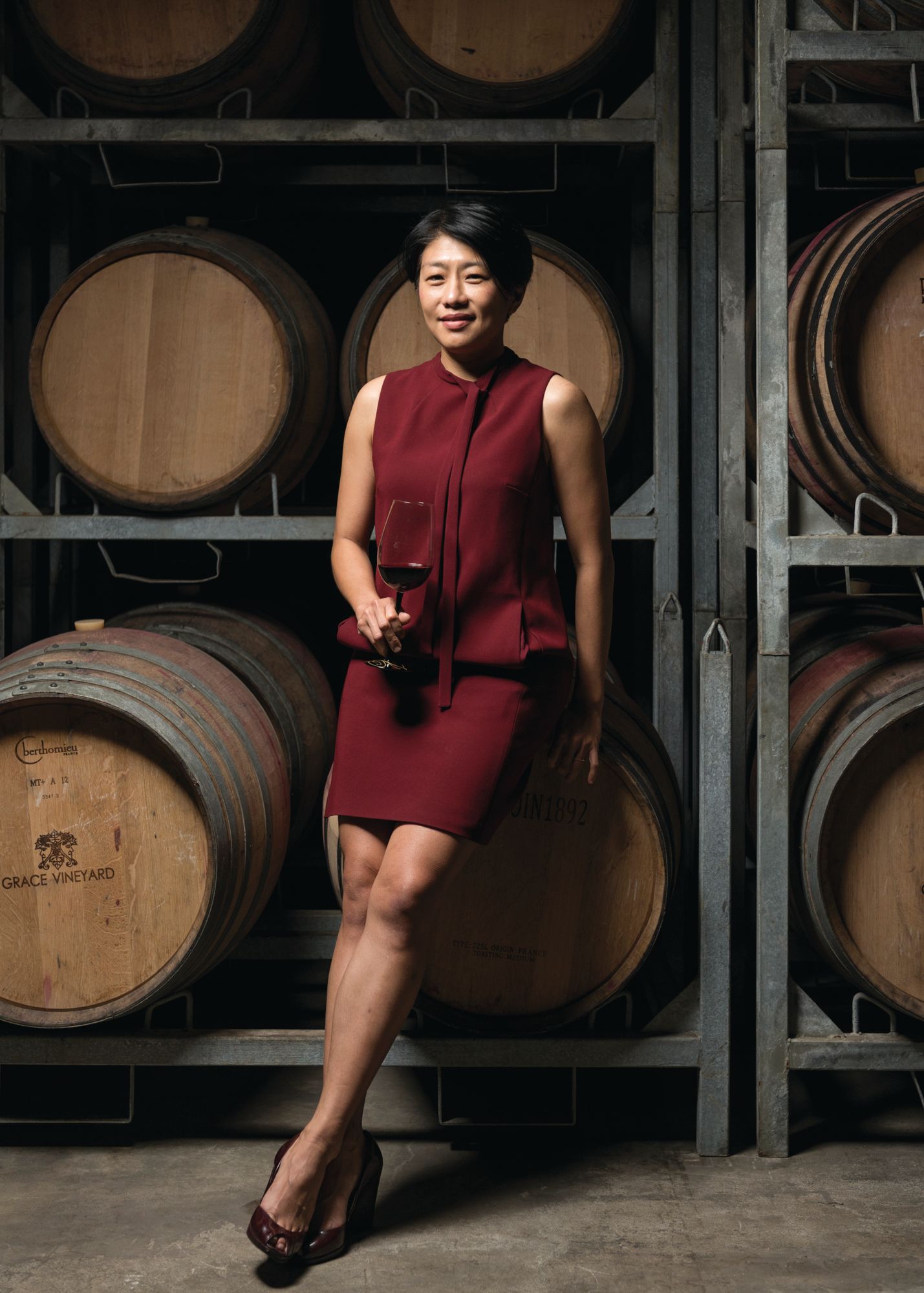 As the landscape of Chinese wines has expanded considerably over the last decade, it’s time to meet the ambitious vintners who are defining the taste of a nation

Writing concisely about Chinese wine is much like trying to write about China itself—a task for the foolhardy. This wouldn’t have been the case a mere decade ago, when producers worth mentioning might have been counted on two hands (and perhaps a foot). The 2009 book The Vineyards of Greater China by Houghton Lee featured a mere 14 producers. However, every passing year makes the topic less appropriate for an article than a tome.

Today, about 450 wineries span the Chinese landscape in 12 regions, from lush plateau to blazing desert. This is not to say that the story of Chinese wine has been an unbridled success, as profitability has remained elusive for many wineries. Production has actually dropped in China every year since 2015, when it hit a peak of 1 billion litres, to 450 million litres in 2019. However, what seems to have accompanied this drastic drop is a substantial hike in quality. Still, much is yet to be determined: a signature grape or style; whether to focus on quality, volume or national distinctiveness; whether to court domestic consumers alone or strive for plaudits overseas.

Thus, attempting to create a “best of” list—my original goal for this piece—felt like an act of hubris. Instead, I chose to highlight a handful of wineries from across the nation to deliver something of
a snapshot of where the Chinese wine industry is heading today. Their stories are about origins, the “why” of each extraordinary person or group that embarked on an undertaking to make wine, and also how they are achieving their next set of goals.

See also: These Alcohol Delivery Services In Hong Kong Will Bring The Bar To You

The LVMH team aimed to create a world-class fine wine in a region never before known to do so and in the process reimagine “Made in China”.

The mountainous southwestern region is distinctive within China for its milder climate, with a long, languid growing season and low humidity permitting organic practices. However, the remote, precarious sites make logistics challenging.

Maxence Dulou, estate director and winemaker of Ao Yun since 2012, cites French vision, wine expertise and attention to detail, as well as the local Chinese team’s creativity and fearlessness in facing change, as keys to learning and moving forward quickly. That makes for a strong pairing.

Although 2013 was Ao Yun’s inaugural vintage, the 2014 was the first I tasted that made me a believer. Classically structured, it delivers a concise palette of green pepper, paprika, black cherry, graphite and steel. Though 90 per cent cabernet sauvignon and 10 per cent cabernet franc, I found the overall effect more redolent of the latter.

This vintage incorporated tiny amounts of syrah and petit verdot, lending it an extra shade of depth. Commencing with green olive and a flash of herbal vigour, it soon serves up black cherry and strawberry on a well-proportioned tannic frame sharpened with lucid acidity.

See also: Why You Need A Wine Fridge––And How To Choose The Perfect One

Hong Kong-born CEO Judy Chan, who took over Grace Vineyard from her father nearly two decades ago, is a much admired figure. In 2018, when the company listed on the Stock Exchange of Hong Kong, Grace’s production capacity was nearly 2 million bottles.

The prescient 1997 investment by CK Chan was both rational (Chan says her father felt China had entered a different era and more people would want to enjoy the fine things in life) and personal (he wanted to give back to the region, where he had attended college, and thought retiring in a winery would be fantastic). Sitting on a well-drained plateau, a six-hour drive from Beijing, sunny, dry Taigu seemed immensely promising, and today it is the region’s most important winery.

When asked about her guiding principles, Chan shares the motto: “Live with Grace”, reflecting her goal to deliver “happy things, the nice things in life”.

Named for the book Blue Ocean Strategy, which helped guide Chan when she took over Grace at the age of 24, Deep Blue’s sticky black fruit beckons on the nose. After a plush, fruit-filled entrance, the palate encounters a wall of sweet, fine- grained tannins that soon peel away again to reveal soft fruit and spicy oak. The blend incorporates merlot, cabernet sauvignon and cabernet franc from Ningxia and Shanxi.

Grace’s first estate wine from Ningxia, Interval is predominantly syrah with 10 per cent cabernet sauvignon. It starts somewhat reticent, wafting a seductive Chinese five spice blend. The fruit beneath is like a cherry stained-glass panel, sheer and lucent despite ample alcoholic heft.

Tasya’s Reserve varietal wines are named for Chan’s daughter Anastasya. The aglianico, a grape best known in southern Italy’s Campania, shows a cheerful, juicy face here in Shanxi. The nose is all base notes of leather and macchia, but then the palate drops a bright, lip-smacking punch of dried cherry fruit and tart acidity.

Founder “Crazy Fang” (aka Wang Fang) is the daughter of Wang Fengyu, planter of the first vines in Ningxia’s Helan Mountain sub- region and one of the founders of Helan Qingxue, producer of the history-making Jia Bei Lan 2009, which won Decanter’s 2011 Red Bordeaux Varietal International Trophy and cemented Ningxia’s reputation as “China’s Bordeaux”. You might think this would predispose Fang to make great Bordeaux blends and you wouldn’t be wrong (her Wild Pony and Pretty Pony blends are much beloved). But it was the allure of making riesling, which she grew to love in her former life as a German housewife, in a picturesque virgin plot across the street from her father’s vineyard, that lured Wang back to China in 2010. Hence, her nickname.

However, the name “Kanaan” also reflects Wang’s belief that the plan wasn’t hers, but God’s—it echoes Canaan from the Bible. Without winemaking or viticultural experience, and relying only on her seasoned palate, which she describes as “like a European old papa’s”, she has spent the past decade building what has become one of the country’s most respected wineries.

Ten years in, Fang doesn’t yearn to expand (she has about 70 hectares) and isn’t chasing new varieties like industry darling marselan. Her strategy is to be “younger”. She’s encouraged by young people sharing wine culture and drinking more at home in the pandemic’s wake. “Wine should be joyful, for sharing,” she says.

The Kanaan labels are some of China’s most recognisable with their stunning horse head profiles, representing the region’s Helan (“beautiful horse”) people. This cabernet sauvignon with 10 per cent merlot is the winery’s flagship red. Over time it has evolved fennel pollen and earthy smokiness that give way to a luminous wash of red cherry. Clenching tannins and flinty acidity show grit despite the overall finesse.

Combining cabernet, merlot and the occult-sounding “snake dragon pearl”, Wild Pony is emblematic of the region’s wild climate and tastes the part: almost a little gamey, with goji berries, a witch’s brew of medicinal bitter herbs, smoked paprika, pebbly tannins and a bright dose of acidity. It is characterful and intriguing.

This is bone-dry and more reminiscent of Austria than Germany, with an intense burst of pineapple sharpened up with flinty, ethereal white pepper and lime blossom. The acidity is a razor-sharp slash through the middle and 13.5 per cent alcohol hardly registers in this precise, angular, extremely smart riesling.

What quickly emerges from speaking to the people behind Chinese wineries is that everyone is ambitious, but each in a unique way. According to director Clara Wang, when her father, Hong Kong businessman KK Cheung, decided to invest in the winery now called Puchang in 2008, he had no less a goal than changing the world’s perception of winemaking in China.

For Cheung, making “healthy” wine was as important as making the best wine. The western region of Xinjiang with its millennia of wine history and a scorching, arid climate struck him as perfect for clean, organic farming. In 2013, nearly 40 years after its first vines were planted, Puchang began producing Ecocert organic wine. Using locally adapted grape varieties like beichun, bred in Xinjiang in 1954, as well as rkatseteli and saperavi from fellow Silk Road stop Georgia, is another pillar of the family’s dedication to regional authenticity and stewardship.

The wine has only been available to the public since 2016, when Wang joined the business upon returning to Hong Kong from Italy. She and Puchang’s Italian chief winemaker Loris Tartaglia share an affinity for natural living and experimentation, dabbling near the edges of “natural wine” (they are currently trialling a rkatseteli orange wine). Puchang’s wines are exotic but never funky; slightly alien in quality (in a good way) but always earnest and pure: exactly the experience you crave when discovering a new region.

The quintessential Georgian white, usually used in orange wines, rkatsiteli shows a gentler face here as a white wine, with lush notes of green melon, honey, aromatic woods and ambergris. The texture is oily and sensuous with fresh but not overbearing acidity.

Georgia’s favourite red, a deeply- coloured, syrah-like grape, delivers what at first seems like a fairly conventional bouquet with alluring, musky purple grape notes that quickly give way to anise, leather and a chilli-like heat. Texturally it’s soft and yielding with body and acidity that are both moderate.

A hybrid of wild, Chinese-origin grapes from Jilin and muscat from Xinjiang, beichun’s heritage left me more curious than clamouring to taste. Imagine my surprise upon opening this moderately aromatic (think pinot noir or grenache), satin- textured wine, bright in acidity and light-footed even at 14.5 per cent alcohol. Sheer and melodic with red currants and breezy florals, this was an unexpected delight.

In a tale resembling those of California’s garagistes and Australia’s weekend wine warriors, 31-year-old former Amazon China wine buyer Ian Dai started his brand Xiao Pu in 2017 with his girlfriend, another couple and a small investment from a friend. Lacking the capital he says it would take to invest in a physical winery, Dai’s peregrinations have seen him make wine in a different facility every year, and even sent him to Yunnan’s Shangri-La for a trial batch.

Dai says his motivation for starting was the dearth of appealing domestic options at the time: “I wanted to make something I wanted to drink.” Not only was quality modest, but the Bordeaux style of most Chinese wines didn’t inspire him. He was attracted to lower extraction, natural wines, orange wines, Pét-Nat (Pétillant Natural, an ancient sparkling wine technique where dead yeast cells aren’t removed from the bottle) and other novelties. As one can imagine, the audience for such wines is generally of Dai’s age or younger, but natural wine is gaining broader appeal across China.

Dai’s plan is to build his brand, then a physical winery and finally plant a vineyard. Is he ambitious? “I want to make the best Chinese wine, meaning: best terroir, highest rating, most expensive.”

This 12.5 per cent alcohol red immediately entices with its dewy, carbonic red-berry fruit. The prettiness continues on the palate, which is like eating raspberries in a rose bush. The acidity is moderate and tannins virtually absent but for a washed, silky dustiness on the finish.

Xiao Pu Light Orange 2020
This light orange wine brings together chardonnay, riesling and petit manseng in a cloudy concoction that initially gives off hints of apricot and quince jelly and soft, cottony florals. On the palate it’s more brothy, with a miso-like savouriness, moderate acidity and a loose, powdery texture.

See also: The Best Dishes To Pair With Champagne

Looking for holiday gift inspiration? These 11 gift ideas — all Bay Area made or inspired — offer all sorts of ways to help your favorite foodie, … END_OF_DOCUMENT_TOKEN_TO_BE_REPLACED

Well, anything that French wines can do, the muscadine can do better. Studies at Mississippi State University indicate that two fluid ounces of … END_OF_DOCUMENT_TOKEN_TO_BE_REPLACED

When decision-makers consider implementing Internet of Things (IoT) solutions, they typically want assurance that their investments will pay off and … END_OF_DOCUMENT_TOKEN_TO_BE_REPLACED