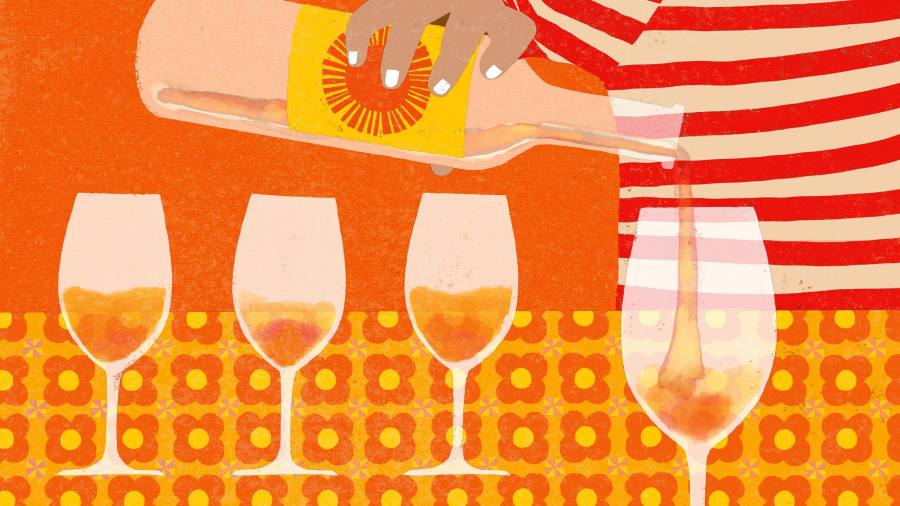 The first time I set eyes on the wines of Slobodne – an orange-wine specialist in the heart of Slovakia – they were ranged against the wall of a cowshed, glowing all the colours of a sunset. Rose-gold, pink, bronze, cloudy and creamy as lemon curd, they were a kaleidoscope of colour and flavour. Some of them tasted fruity and floral, others more spicy, even a little smoky. But they all shared a visceral quality, a funk and a fragrance, at once edgy and original.

Clad in fedoras and Breton stripes, winemaker Agnes Lovecka and her brother-in-law Miso Kuropka look like members of an east London art band (Agnes is a drummer in her spare time). But when it comes to making wine, they favour the old ways: fermenting in the open air, ageing in clay amphorae, eschewing filtration, chemicals and sprays.

“Slobodne means ‘freedom’ in Slovakian,” said Agnes, pouring me a glass of their signature cuvée Cutis Deviner. This wine was the colour of topaz, and tasted of orange peel, lychee and oolong tea. They told me about the estate’s history: how the family lost it all to the second world war and the communists, only to wrest it back, and rebuild it, following the Velvet Revolution in 1989. Later that night we raided the cellar and ate lamb cooked over an open fire.

Slobodne was where my love of orange wine was ignited. And it was where Santiago Lastra, the acclaimed Mexican chef behind Kol, which opens in the West End this week, fell in love with orange wine too. “Someone handed me a glass and I was like, ‘What is this?’” he remembers. “It was this beautiful orange colour, it smelled of roses and peach, it was fresh and interesting. Up to that point I had never been that focused on wine, but that moment changed me.” All four house wines at Kol have been created by Slobodne to pair with Lastra’s “modern Mexican” menu: langoustine tacos, kohlrabi ceviche, cheese and truffle quesadillas. And the wine list, overarchingly, is an ode to the heartlands of orange winemaking: Slovakia, Slovenia, Friuli, Georgia, Austria, the Czech Republic. “The kind of places,” says Lastra with a smile, “that usually get filed under ‘The Rest of the World’.”

Orange wine and Mexican food might sound like a funny match. “But that combination of freshness, sourness and bitterness has a lot in common with the hibiscus and lime- juice agua frescas that you drink with food in Mexico,” says Lastra. “They’re wines that go so well with spicy flavours.”

Orange wines are not to everyone’s taste – there are plenty who regard them as pretentious, unrefined or even plain faulty. Their image has not been helped by a scandal that broke in Italy in July, when accusations were made about the illegal use of migrant workers on the farming magnate Settimio Passalacqua’s land in Puglia. His daughter, maker of hipster favourite Calcarius, was swept up in the scandal. She maintains that her winery operates independently of her father and has said “he should be punished if he did what he is accused of”. It wasn’t enough, though, to stop of slew of retailers de-listing them.

It’s a genre that’s become freighted with ideological baggage. In reality, it’s just another winemaking technique. Orange wines – or “skin-contact wines” as they’re properly known – are simply white wines that have been fermented, and sometimes aged, with the skins still in the mix. Those skins impart aroma, flavour and colour. And they give the wine an exciting texture – a tannic grip more like tea or cider that can be wonderfully appetising. Most early wines would have been made this way: just a jumble of grapes left to ferment in a pot. But as winemaking modernised, and ideals for white wine changed, those characteristics were ironed out.

Orange wine is made all over the world these days, from England to Japan. But among devotees, it’s revivalists such as Pheasant’s Tears in Georgia, and Radikon and Gravner in Friuli Collio, on the Italy/Slovenia border, that are deemed the most authentic. Fermented and aged on the skins, sometimes for months, in oak or amphora-like terracotta qvevri buried in the ground, these richly coloured wines are big and bold, with broad textures and tastes that combine mouthwatering acidity with intense, earthy nuttiness.

Few know them better than Doug Wregg, marketing director and buyer for the leading orange-wine merchant Les Caves de Pyrene. “The influence of these winemakers cannot be underestimated,” he says. “They have introduced people to a style, a taste and a texture in wine they didn’t know existed.” He recommends Okro Rkatsiteli 2017: “Seven months on skins, properly amber, with ‘corduroy’ texture and that trademark bitter-orange, warm, apricot-skin flavour.”

Another quintessential orange is the 2013 Rebula from Slovenian winemaker Mlecnik, “one of the original skin-contact growers,” says Wregg. “Deepest amber, huge depth of flavour. A wine that can age for 30 years and that you can have open for days – a work of pure art.”

Pierre Malouf, wine buyer for the Ottolenghi restaurant group, believes it’s time the image of orange moved on. “We need to get away from this idea that orange wines are faddy or hipster,” he insists. “If you go to the British Museum and look at the paintings, all the wines used to be amber.”

He pours me a glass of the deep-orange Ageno La Stoppa 2013, a biodynamic blend of malvasia, ortugo and trebbiano from Emilia Romagna: it’s spicy and marmalade-y, with a spooky touch of eucalyptus. Less like a wine, and more like an amber vermouth.

“Wines like these got stuck behind the Iron Curtain for so long, people were discouraged from making them,” says Malouf. “But now winemakers are getting bolder again – resurrecting traditional varietals and reviving old techniques. We’ve had decades where wine has been about drink, drink, drink. Now we’re drinking less, maybe, but thanks to wines like these, there’s much more thinking to be done.”

Home Videos The WORLD of WINE – Wine News. Cheap wine, tasting notes and cooking with wine The World of Wine – May 2021 … END_OF_DOCUMENT_TOKEN_TO_BE_REPLACED

How to visit Napa Valley on a Budget. In this video Carson and I explain a few ways to enjoy Napa on the cheap. Tip and advice about how to visit Napa … END_OF_DOCUMENT_TOKEN_TO_BE_REPLACED

Home Videos Get To Know Argentina Wine | Wine Folly If you love Malbec, Argentina is your ultimate wine region. But that’s not … END_OF_DOCUMENT_TOKEN_TO_BE_REPLACED