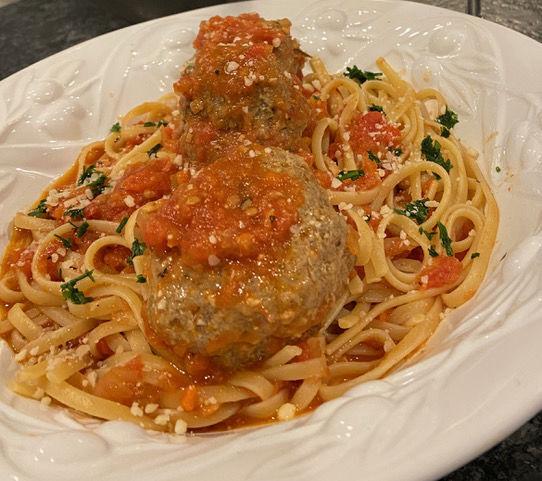 I was raised in a working class neighborhood where the adults were very unambiguous. Subtlety and nuance were not among the tools in their communication toolbox.

So, on those occasions when I made a particularly egregious error in judgment, I was quickly and loudly admonished for my blunder in oftentimes colorful language.

However, if my transgression was minimal, the verbal remonstration would likewise be less vociferous and profane. For example, when I did something that only slightly offended my Italian immigrant grandfather, he would often shake his head and begin his criticism with the words: “Hey Meatball.”

I fondly remember those days of yore and the many family gatherings that always revolved around meals which many times featured — you guessed it — meatballs.

Notwithstanding this rather awkward segue, today I’m going to explore the world of meatballs, give you my own favorite recipe and tell you about a wine to accompany this all-American dish!

And while some of you may think the meatball has its origin in Italy, it really is an Italian-American culinary creation. The great Italian immigration to America began around 1880 and lasted until the mid 1920s. These hardy souls were very poor, and they came to our country to find work and a better life for their families.

They left a place where meat was not plentiful and also very expensive, particularly beef. There was no culinary tradition for the meatball as we know it today in America.

In Italy, meatballs are called polpettes and can be made with just about any kind of meat or seafood. They’re usually eaten as a separate dish or added to soups, but none of them resemble our American version that are submerged in marinara sauce and ladled onto pasta.

My recipe is a hybrid of one that I inherited from my mother and grandmother. While a combination of beef and pork comprise the meat component, the other ingredients are just as important in the creation of the meatball. My only deviation from the original recipe is that I substitute Italian sausage for the pork portion. Here’s my recipe.

In a large mixing bowl, combine the milk and bread for 10 minutes and then squeeze and discard all the liquid from the bread. Add the remainder of the ingredients to the bowl and mix together with your hands. Take a small portion of the mixture, sauté it and then taste, adding salt or seasoning if necessary.

Form the mixture into meatballs (mine are usually two inches in diameter). While many recipes call for frying the meatballs until done, I prefer to bake them in a 350-degree oven for 20 minutes, turn them and cook for another 20 minutes. Then I add them to a steaming pot of marinara sauce to simmer at a low temperature for two hours before serving them with pasta.

My favorite wine to accompany this dish is barbera (which is also the grape from which it is made). From the Piedmont region in northern Italy, barbera makes a medium-bodied red wine full of bright cherry flavors and excellent balancing acidity.

It pairs exceptionally well with meatballs in marinara sauce. Barbera is widely available and also very reasonably priced (usually between $15 and $25 a bottle). Among the best barbera producers are Vietti, Chiarlo, Prunotto and Pio Cesare.

You’re going to love this food and wine pairing.

Take it from a real Meatball!

John Brown is also a novelist. His latest book is “Augie’s World” which is a sequel to his debut novel, “Augie’s War.” You can find out more about his novels at wordsbyjohnbrown.com

Home Videos The WORLD of WINE – Wine News. Cheap wine, tasting notes and cooking with wine The World of Wine – May 2021 … END_OF_DOCUMENT_TOKEN_TO_BE_REPLACED

How to visit Napa Valley on a Budget. In this video Carson and I explain a few ways to enjoy Napa on the cheap. Tip and advice about how to visit Napa … END_OF_DOCUMENT_TOKEN_TO_BE_REPLACED

Home Videos Get To Know Argentina Wine | Wine Folly If you love Malbec, Argentina is your ultimate wine region. But that’s not … END_OF_DOCUMENT_TOKEN_TO_BE_REPLACED