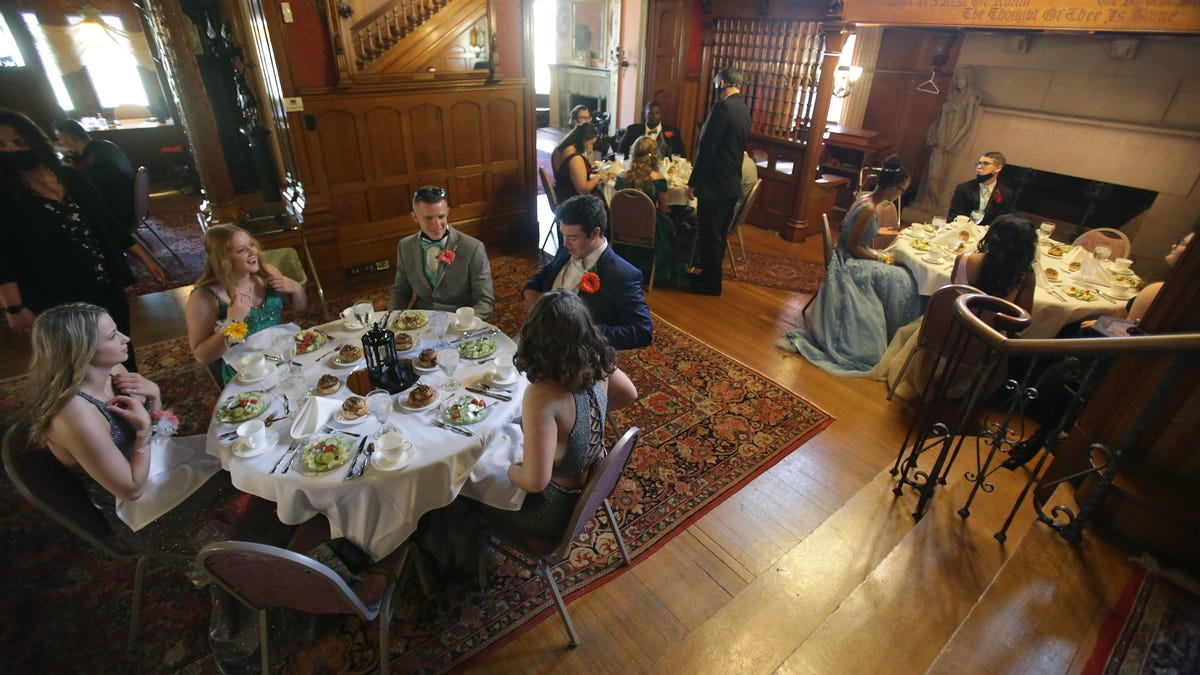 MASSILLON – 2020 was a tough year for Massillon Woman’s Club.

After celebrating its 100-year anniversary in 2019, club members were looking forward to the momentum for the following year. They had big plans.

The pandemic had other plans. Forced to close its doors during the shutdown, the historic Five Oaks mansion has mostly sat empty.

But that hasn’t stopped the utility bills or the maintenance needs for the 127-year-old home.

There were no grand parties or typical club gatherings. Weddings planned for the home were pushed back again and again.

The closure has taken a toll on not only the club coffers but also membership.

Club manager Sharon Eslich said the club has lost about 25% of its membership during the past year. Many just didn’t renew, she said.

The club is going to be fine, Eslich said, and slowly the Woman’s Club is beginning to host small events, including last week’s Miss Massillioan and Outstanding Senior Boy luncheon.

“We used to host them all the time,” she said. “This is the first week we’ve done any events since last March.”

What’s next for the Massillon Woman’s Club in 2021?

The mansion has been reserved for baby showers and small parties in the coming weeks.

The Woman’s Club board recently held its first meeting since the pandemic. On the agenda, how to to keep things going, she said.

“We had a great 100 years. The 101st year was rough. How can we make the 102nd better?” Eslich said. “The club was actually started at the end of the last pandemic. We hope to make it through this one.”

In order to keep the club moving ahead, it must build its member base.

Membership information will be going out in May for the upcoming season that begins in September, Eslich said.

Board member Joan Camp said joining the historic group was more than she could have expected.

The historic mansion piqued her interest after visiting it during the annual Community Candlelight Walk. She joined the club’s history.

“I love being there,” Camp said. “There are wonderful speakers that are amazing and lunch afterward is always so good. It’s all homemade.”

Being a member has enriched her life, she said.

“I’ve made some really good friends,” Camp shared. “Being in that house is medicinal. It really is for me. There is a peace and it’s just so beautiful.”

This summer, the Woman’s Club will host Arts in the Garden from 10 a.m. to 6 p.m. June 26 along historic Fourth Street and at the home.

The event will feature local artists, crafters, florists and gardeners, live music and food trucks. The club is taking applications for vendors.

The fundraiser will hopefully draw community members to learn more about the club and drum up new members, Eslich said.

While the club’s budget is looking dreary, Eslich said, they were able to raise some funding through some events including the holiday stroll in December, which featured timed tours of the home decorated for Christmas and a raffle for a gourmet dinner.

That, coupled with private donations, helped pay the bills.

“We did everything we could to keep the house going,” she said. “Right now we have no staff expenses. We have a couple people on board for an hour or two a month costing us about $200 per month.”

Eslich volunteers her services because she loves Five Oaks.

Members have stepped up to lend a hand wherever they can.

After the shutdown, Eslich said, food in the freezer and pantry was donated to the Salvation Army, Refuge of Hope in Canton and other smaller charities.

“Our philanthropy never stopped,” she said.

After coming off their best year in 2019, Eslich said, the group had planned to expand section offerings. They started a wine tasting section and have plans to start a craft beer section and a mystery section, where they will solve a mystery every month.

Club members hope to begin meeting at local craft breweries or restaurants. In June, an outing to Cherry Road Winery will allow club members to get a taste of a wine named for the Woman’s Club.

“We are progressing and adding new things,” she said.  “We’re kind of like the women that found us. We are resilient and we are fighters.”

Home Videos The WORLD of WINE – Wine News. Cheap wine, tasting notes and cooking with wine The World of Wine – May 2021 … END_OF_DOCUMENT_TOKEN_TO_BE_REPLACED

How to visit Napa Valley on a Budget. In this video Carson and I explain a few ways to enjoy Napa on the cheap. Tip and advice about how to visit Napa … END_OF_DOCUMENT_TOKEN_TO_BE_REPLACED

Home Videos Get To Know Argentina Wine | Wine Folly If you love Malbec, Argentina is your ultimate wine region. But that’s not … END_OF_DOCUMENT_TOKEN_TO_BE_REPLACED