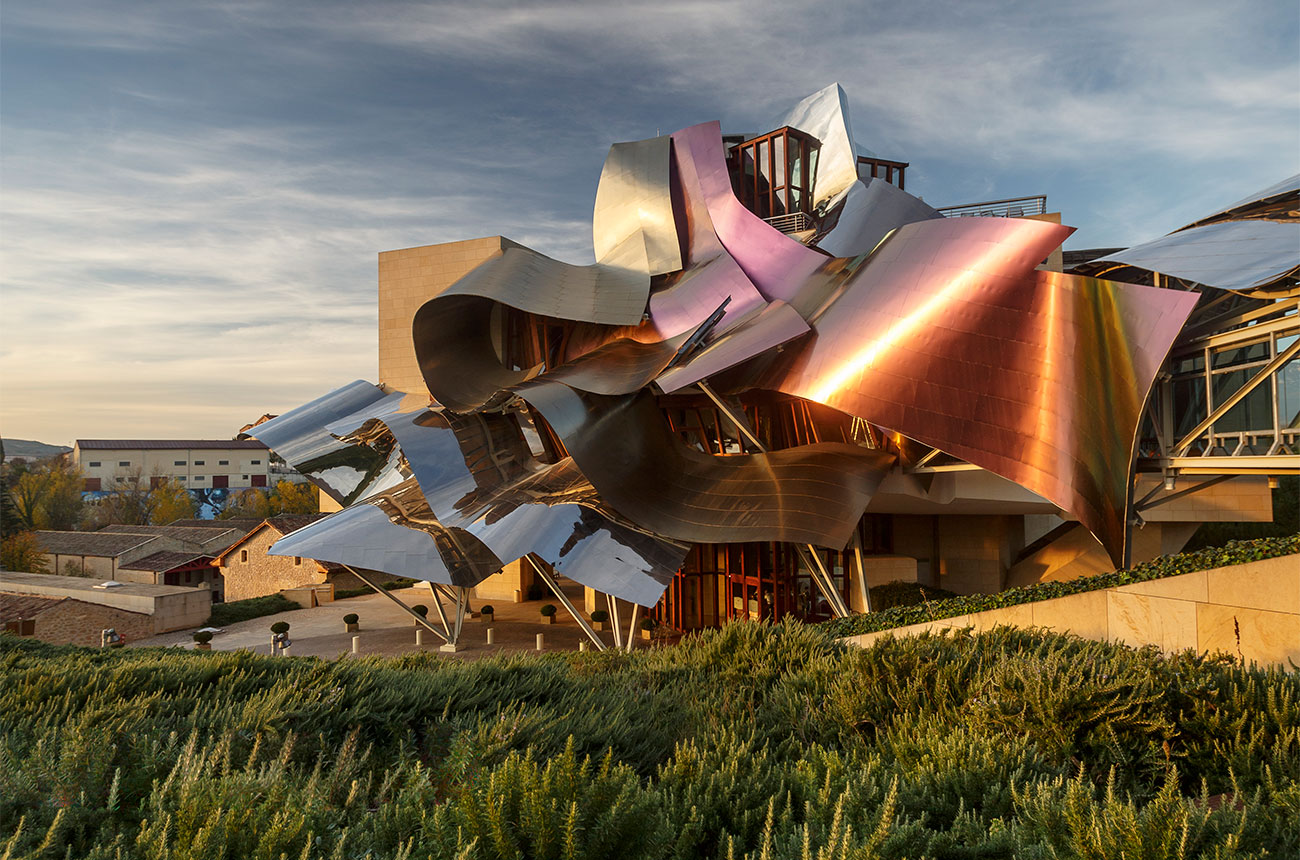 Marqués de Riscal has always been a winery of firsts. When it launched in 1858, founder Don Guillermo Hurtado de Amezaga insisted on selling his wines in bottle rather than barrel – the first winery in Rioja to do so. A guarantee to his customers that they were getting what they paid for, it followed the practices of the great estates of Bordeaux and was a powerful statement of intent.

It was clearly justified: in 1895 Marqués de Riscal became the first non-French winery to win a Diplome d’Honneur at the influential Bordeaux Exhibition. The certificate is still on the label of the Reserva today. The Bordeaux win brought Marqués de Riscal a lot of attention, so to protect from forgeries, the winery started to deck its bottles in the gold mesh chain-mail that’s very much part of the wine’s signature look.

Today Marqués de Riscal Reserva is one of Rioja’s best-known wines. It has the advantage that it’s easy to get hold of, extremely well-priced for the quality and excellent with many types of food.

At the heart of the wine lies Rioja’s flagship grape: Tempranillo. In the 2016 Reserva, it makes up 96% of the wine, partnered by a little Graciano. There’s more Tempranillo in here than would have been the case 100 years ago, but otherwise, it’s made more or less with techniques first developed 150 years ago and perfected over time.

All of the grapes for Marqués de Riscal’s wines come from the Rioja Alavesa sub-region. North of the River Ebro and running into the foothills of the Sierra de Cantabria, it is home to the DO’s highest vineyards. This altitude, combined with free-draining chalk/clay/limestone soils gives the wines a characteristic brightness and lift; a poise and perfume that are quintessentially Riojan.

Marqués de Riscal has made a firm commitment to convert its vineyards to organic viticulture, which means no herbicides or pesticides. Leaving vines to fend for themselves makes for stronger, healthier plants and, with less intervention, a more pure expression of terroir.

To attain its trademark balance, Marqués de Riscal Reserva requires quality fruit but also sensitive handling in the winery. It spends a relatively short time on skins (no more than 12 days) so that it is not over-extracted, followed by two years’ ageing in American oak and one year in bottle.

The result is a wine of concentration but also elegance; it can age for many years, but is ready to drink on release. It’s well structured, but also supple, so matches everything from casseroles and red meat to cheese and poultry, making it a reliable choice in any restaurant.

The XR Reserva is similar in many ways. From the villages around Elciego, it has an almost identical varietal make-up (95% Tempranillo, 5% Graciano) and spends two years in American oak. Yet it’s noticeably different.

Whereas the Reserva is all about softness and roundness, the XR is tighter and more taut; its tannins slightly more to the fore. Food-wise, it’s more in the red meat spectrum. In short, it’s a bit more Bordeaux-like in feel, which is no accident.

There is a long history of interaction between the two wine regions, and for much of the 20th century Marqués de Riscal winemakers followed the tradition of Bordeaux cellar masters by keeping a record of barrels that showed unique characteristics (marked as XR on the selected barrels). XR pays homage to this tradition. Still made in the original winery from 1883, it’s a fascinating counterpoint to the traditional Reserva.

The years from 1985 to 2005 saw some major innovations by Marqués de Riscal, among them a new winery, the construction of the iconic Frank Gehry-designed City of Wine hotel and the creation of Baron de Chirel.

It was the first of a new breed of deluxe Riojas that changed the rules. It’s two-thirds Tempranillo and one-third ‘other’ varieties.

It’s made from the very best fruit from vines aged between 80 years and 110 years, and is aged for just under two years in French oak. That gives a wine of extraordinary concentration, finesse and elegance that is crying out for powerful food: venison, game, lamb shoulder.

It’s been described as a ‘Riojan first growth’ and deservedly picked up a Platinum medal – 97 points – at last year’s Decanter World Wine Awards. It can be drunk on release, but really this is a wine that should be cellared for many years to allow its full complexities to develop.

From bottling to the Bordeaux Exhibition, and classic Reservas to groundbreaking projects in both winery and vineyard, Marqués de Riscal is a winery that sets trends but follows its instincts; that respects history but never stops looking to the future.

Home Videos The WORLD of WINE – Wine News. Cheap wine, tasting notes and cooking with wine The World of Wine – May 2021 … END_OF_DOCUMENT_TOKEN_TO_BE_REPLACED

How to visit Napa Valley on a Budget. In this video Carson and I explain a few ways to enjoy Napa on the cheap. Tip and advice about how to visit Napa … END_OF_DOCUMENT_TOKEN_TO_BE_REPLACED

Home Videos Get To Know Argentina Wine | Wine Folly If you love Malbec, Argentina is your ultimate wine region. But that’s not … END_OF_DOCUMENT_TOKEN_TO_BE_REPLACED