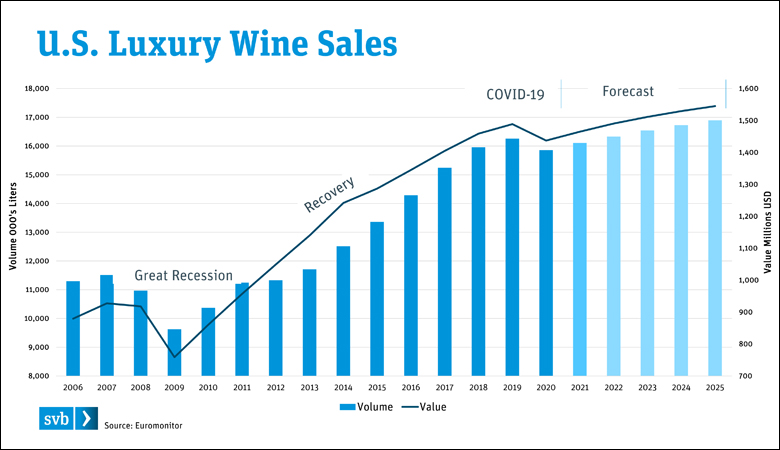 Last month, Silicon Valley Bank broke down some of the major trends of the year within the American wine scene via its annual State of the Wine Industry videocast. The hour-long meeting was the 20th consecutive of its kind and focused on how wine has weathered and adapted to major obstacles like the pandemic and wildfires. The videocast included dialogue from Amy Hoopes of Wente Family Estates, Erik McLaughlin of Metis, Devin Joshua of Merryvale Vineyards and Paul Mabray of Pix.wine. It was moderated by Rob McMillan of Silicon Valley Bank (SVB).

Like much of the news from 2020, the report was fairly sobering, but there were also some interesting developments and business adaptations that indicate a resilience in general. Interestingly, the hospitality gut-punch that COVID delivered helped create a much-needed boost. SVB reported an oversupply and discounting in much of the wine realm prior to the pandemic, but by March and April, panic buying set in and wine experienced a significant uptick in sales.

Even with the burst of sales, wineries were still rattled, and rightfully so: According to the report, off-premise sales sank a staggering 90% in April, just as we were getting accustomed to the new normal of shelter-at-home orders. Some silver linings did emerge, though. Many of the panelists talked about 2020 ushering in the golden era of online wine, and the numbers reflect as much. Between April and November of last year, online sales growth for wine jumped from a 2% increase to 10%. During the heat of that stretch, e-commerce growth that would normally take a decade occurred in just three months’ time. As we like to stay, unprecedented.

Obviously, the tasting room and wine club stats weren’t great, but thanks to e-commerce, new and younger customers were drawn into the scene. Wineries all over the U.S. got creative with virtual tastings, many of which offered an intimate, appointment-only kind of feel. And that tended to translate to bigger sales despite fewer overall customers. Retention was very much a theme of 2020, with wineries working overtime to keep fans and followers, new and old.

Another SVB talking point: Many wineries went outside the usual to hire new staff that could keep the brand afloat. In other words, producers looked to the tech and business realms, among others, for talent that would translate to the wine scene — it’s noteworthy, as the industry has been fairly insular over the years. An increasing number of labels developed roles like tech and data analysts and digital marketing specialists to further adapt to the online side of wine, which is currently bigger than ever.

The tech side of wine is one that will continue to develop and, as the panelists mentioned, was forced to evolve at a lightning-fast rate given the circumstances. Almost overnight, wine went from an engine dependent on restaurants, bottle shops and other retail placements to one of online consumers stuck at home. The pandemic will undoubtedly be quelled, but the attractive nature of purchasing online won’t leave with it. We will continue to explore wines from our comfy couch, donning our well-worn sweatpants.

The wildfire component was interesting, too, but not discussed at great length — the videocast was only an hour long. Certain regions like the Willamette Valley and much of California experienced colossal smoke impact, with some producers unable to make wine or, at least, turn out significantly less. But there was a leveling effect, especially in Oregon. Many argue the state was swimming in too much wine, and the lower yields and resulting wine production of 2020 will create balance.

Credit to SVB for adding a second videocast about 2020, as it was a year for the history books. Sadly, the sequel aired too late for us to mention in print. But, in the spirit of looking ahead, maybe that’s not a bad thing. Last year did more than enough damage, and we’re settling into a new year, one that will surely offer a new slew of challenges but, perhaps, not at the “unprecedented” level.

As the industry knows well, Oregon wine is made of resilient, thick-skinned people. They deal with curveball after curveball every growing season so perhaps they are the best crowd to take something like colossal climate change and a global pandemic head on.

Home Videos The WORLD of WINE – Wine News. Cheap wine, tasting notes and cooking with wine The World of Wine – May 2021 … END_OF_DOCUMENT_TOKEN_TO_BE_REPLACED

How to visit Napa Valley on a Budget. In this video Carson and I explain a few ways to enjoy Napa on the cheap. Tip and advice about how to visit Napa … END_OF_DOCUMENT_TOKEN_TO_BE_REPLACED

Home Videos Get To Know Argentina Wine | Wine Folly If you love Malbec, Argentina is your ultimate wine region. But that’s not … END_OF_DOCUMENT_TOKEN_TO_BE_REPLACED