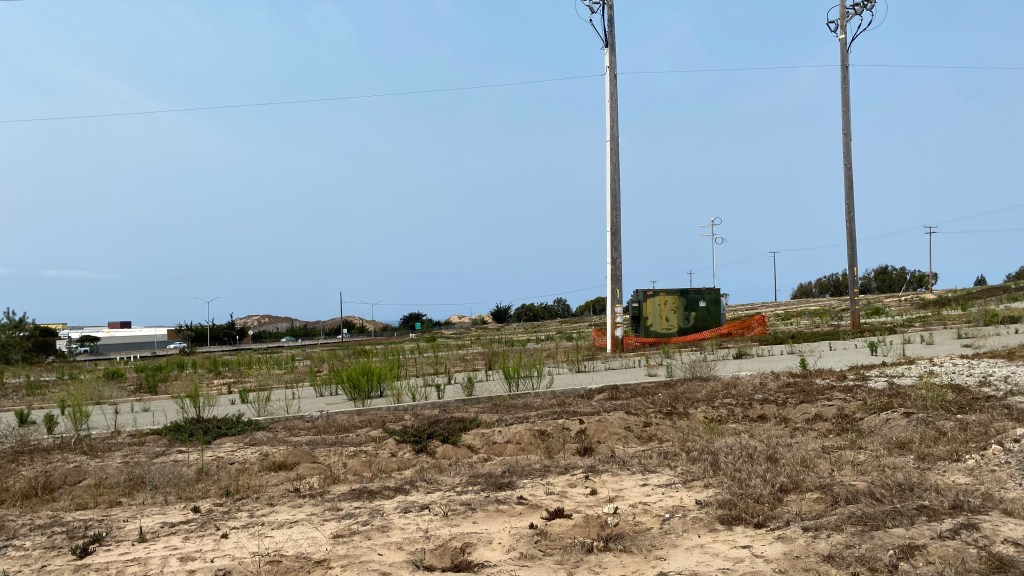 Marina city leaders heard bids during a meeting Tuesday for what would become Marina’s largest hotel, to be located across from The Dunes shopping center on Imjin Parkway next to Highway 1.

Representatives from Blackridge Colorado, Petrovich 53d Partners and Cambria Hotels, Kuber Arizona, and Dadwal Management Group were the four groups that made presentations for their hotel plans to the council.

Marina plans on building its largest hotel at this site at Imjin Parkway and Second Avenue next to Highway 1. (Tom Wright – Monterey Herald)

“We’ve been to the site, we’ve had architectural work done on it, we’ve spent time looking at prevailing wage issues with the project as well as the fees associated with the project,” McChesney said. “We’ve done a detailed pro forma by looking at the hotel performances in the area as well as underwriting all of the associated costs of operating in that market. So we feel pretty confident in the numbers and how we would be able to operate efficiently.”

Paul Petrovich of Petrovich Development Co. said he’s been a developer for 40 years and he provides his own cash equity for his projects. Petrovich said he’s a Monterey Peninsula resident and wants to bring Hilton’s luxury LXR brand to the site. The plan would include a 300-room hotel and a 40,000-square-foot Concours Hall of Fame with rare cars in homage to the Pebble Beach Concours d’Elegance and Classic Car Week.

“We are not wanting nor would we want to take this property and develop … some sort of lower-level Hyatt or Marriott project here,” he said. “This is too precious of real estate and the importance of it, revenue-wise, to the community and what it can bring as a sense of place is our goal here.”

Jason Bass with Kuber Companies said their plan would be to develop an AC Retreat by Marriott with 160 rooms and an Element by Marriott with 140 rooms. The hotels would be paired with an event center, office space and retail sites. He said because of weather and its location next to Highway 1, a luxury hotel would not work best at the site.

“We examined really what is that demographic (of potential customers) and what’s the demand, but we also wanted to balance our decision on branding with the location and demographics of the community,” Bass said. “What made sense to fit with the overall feel of Marina? And what would be the best way to optimize the economics for the city?”

Harvey Dadwal, president and CEO of Monterey Peninsula Hotels Group, was the final presenter. Dadwal is a Monterey County resident as well as the owner and operator of the SpringHill Suites by Marriott at the Dunes On Monterey Bay. His proposal would include an 8,000-square-foot conference center, an organic greenhouse farm-to-table restaurant with rooftop dining and a wine-tasting venue.

“The way I have designed this building and incorporating eco-resort features will make the city of Marina a destination place,” he said. “I have spoken to Marriott, Hyatt and Hilton and we have all kinds of brands available on this site. This is very unique and one of the most beautiful sites on the Monterey Peninsula.”

Long said the discussion will continue on how the hotel plans will fit in with the city in future meetings.

“We’ve heard it from the public as well as our presenters: This is really a unique property on the Monterey Peninsula, one of the last large ones on the coastline to be developed and this can define our city not only in aesthetics and view but also financially in the revenue it will bring,” he said.

Home Videos The WORLD of WINE – Wine News. Cheap wine, tasting notes and cooking with wine The World of Wine – May 2021 … END_OF_DOCUMENT_TOKEN_TO_BE_REPLACED

How to visit Napa Valley on a Budget. In this video Carson and I explain a few ways to enjoy Napa on the cheap. Tip and advice about how to visit Napa … END_OF_DOCUMENT_TOKEN_TO_BE_REPLACED

Home Videos Get To Know Argentina Wine | Wine Folly If you love Malbec, Argentina is your ultimate wine region. But that’s not … END_OF_DOCUMENT_TOKEN_TO_BE_REPLACED