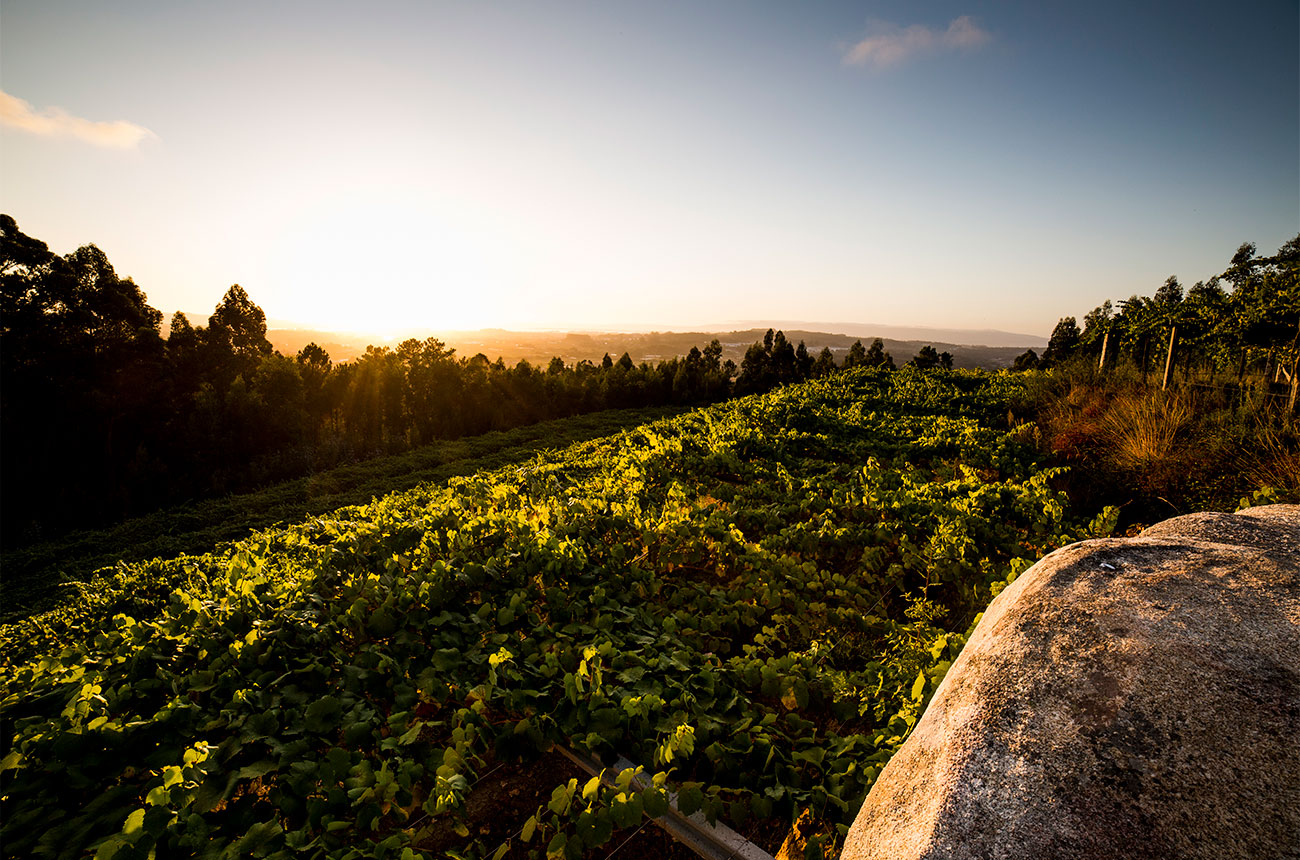 Since its launch in 1987, Mar de Frades has occupied a place at the vanguard of progress for both the Rías Baixas region and its signature grape: Albariño. It has released the first sparking Albariño, as well as creating a dessert wine from the varietal, which will be released in October. Arguably, however, the most prominent aspect of the winery’s pioneering approach is its exploration of the territory of Rías Baixas, seeking out contrasts between its five sub-regions with the goal of expressing these differences through unique wines.

Such efforts were first realised with Finca Valiñas, a wine crafted from vines grown in Salnés Valley, the best-known zone of Rías Baixas. Planted in 1975, Mar de Frades calls this hillside vineyard encircled by eucalyptus trees and facing the sea, its ‘grand cru’. The free-draining, shallow and granitic soils temper the effects of Atlantic-driven rainfall, while the slightly earlier picking and higher altitude further elevate acidity and freshness.

The grapes grown here produce a wine with enough structure to develop in complexity during a long maturation period; the 2016 vintage has only been recently released. Winemaker Paula Fandiño explains: ‘This is an old vineyard which maintains a unique freshness that you do not find in lower parts of the valley, making it possible to vinify wines for ageing.’

Grapes are macerated for 36 to 40 hours at 10°C to 14°C to extract more saline essence and gain aromatic complexity; then after fermentation, the wine rests on its lees for the first year.

‘To begin lees-stirring and ageing the wine straight after fermentation would be a mistake,’ says Fandiño. ‘We need at least one year to be able to know and understand the wine, that is when we really see the varietal expression of Albariño and begin to sense notes of white flowers and fennel.’ What follows is further, slightly more proactive ageing, which is divided between battonage and periods of rest, as well as six months in new French oak.

From October of this year, Finca Valiñas will have a new stablemate, as ongoing research and investigation by Mar de Frades has identified a suitable addition to its ‘Finca’ project. Finca Monteveiga is a plot of vines in Ribera del Ulla, the most youthful of all the Rías Baixas zones, which was only officially recognised in 2000.

Ribera del Ulla is not only marginally further north than Salnés Valley, but the vineyards sit at a slightly higher altitude and receive approximately 25% less annual rainfall. Characterised by the Ulla River, which forms a spine that runs through undulating terrain composed of sandy soils, Ribera del Ulla currently accounts for a mere 5% of total production of Rías Baixas. Although a liqueur called Orujo – produced from grape pomace – has long been made here, this province is known more for livestock than vines.

The slightly cooler conditions mean that Ribera del Ulla is more suited to the growing influence of climate change, while being situated further inland gives the area a notable continental influence, which equals cooler nights, warmer summers and colder winters, plus a longer growing season.

‘Although it is further north and not so close to the coast, Ribera del Ulla’s climate is still marked by the river,’ says Fandiño. ‘Our plots were planted in 2004 using high trellises, with reduced yields and less intensive viticulture. Furthermore, as there is reduced Atlantic influence, we are able to extend the ripening period, thereby increasing the terpenic aromas of the grapes, so the wines show intensely ripe apple and peach notes in addition to more balsamic aromas like mint and eucalyptus. We know that this area has a lot to offer, and that its soils and microclimate will give us elegant, long-lived wines.’

Certainly, with Finca Valiñas, Mar de Frades has already proved that if an uncompromising approach is adopted in both cellar and vineyard, Albariño from Rías Baixas is capable of producing world class wines that can age gracefully for many years. Now, with the imminent release of Finca Monteveiga, Mar de Frades intends to illustrate that Rías Baixas, far from being the homogenous, maritime region of popular opinion, is blessed with both climatic and geological nuances that are only just beginning to be revealed.

Home Videos The WORLD of WINE – Wine News. Cheap wine, tasting notes and cooking with wine The World of Wine – May 2021 … END_OF_DOCUMENT_TOKEN_TO_BE_REPLACED

How to visit Napa Valley on a Budget. In this video Carson and I explain a few ways to enjoy Napa on the cheap. Tip and advice about how to visit Napa … END_OF_DOCUMENT_TOKEN_TO_BE_REPLACED

Home Videos Get To Know Argentina Wine | Wine Folly If you love Malbec, Argentina is your ultimate wine region. But that’s not … END_OF_DOCUMENT_TOKEN_TO_BE_REPLACED