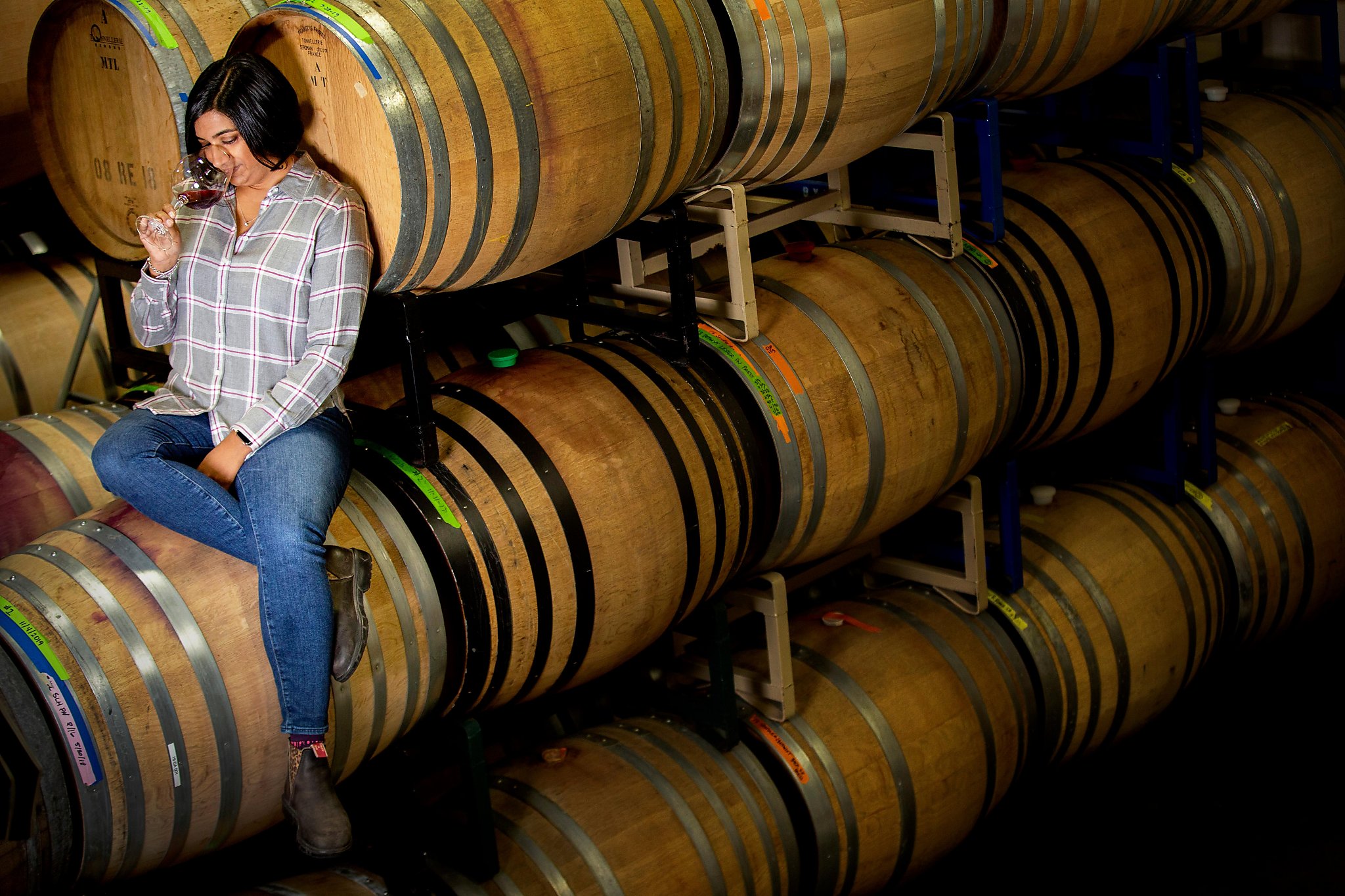 California’s 2020 wildfire season will be remembered not only for its destruction of wineries, homes and vineyards but also for another lasting impact: the unprecedented number of California wineries that have decided, due to wildfire smoke, to make far less wine than usual — or in some cases, to make no wine at all.

Just how much California wine will go unmade in 2020 is impossible to quantify right now, as many farmers and winemakers are still assessing the impact of wildfire smoke, which can imbue wines with unpleasantly smoky flavors and aromas, a still scientifically murky phenomenon known as smoke taint.

But early anecdotal reports from individual vintners paint a dramatic picture. Philippe Melka, consulting winemaker for about 25 high-end California wine brands, most in Napa Valley, said that he harvested just 35-38% of the red grapes he’d planned to. He determined that that wildfire smoke had compromised the balance of the crop. Napa and Sonoma wineries, including Spoto, Neal, Garden Creek, Trombetta, O’Shaughnessy, Somerston, Reeve and Lamborn, have indicated they might make little or no wine.

Other estimates suggest the overall damage to grapes could be lower, though still significant. Atlas Vineyard Management, which manages 3,500 acres of vines, has seen 60-65% of its grapes harvested, said CEO Barry Belli. Linda Reiff, president of the Napa Valley Vintners, a trade association representing 550 wineries, said 80% of her organization’s members will make some amount of wine. 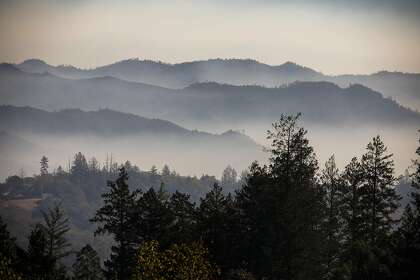 Still, regardless of any individual winery’s fate, it’s impossible for the industry to read 2020 as anything but a wake-up call. Many winemakers are determined to learn from this catastrophic year rather than despair over lost inventory. The threat of fires and smoke to California’s wine industry seems to be here to stay.

“This is the fifth year in a row that a California wine region has been affected by the fires, so it’s not an issue that we can just dismiss,” said Priyanka French, winemaker at Napa’s Signorello Estate, which is in the process of rebuilding after burning in the 2017 Wine Country Fires. “This is part of the reality of making wine in California now.”

Napa Valley saw the bulk of the damage this year in the Glass Fire, which erupted in late September, subsequently damaging or destroying 27 winery or vineyard properties. “I’m not sure the scale overall in Napa,” Melka said of the impact of smoke taint, “but what I can tell you is that in our portfolio, some of the wineries are not going to produce any 2020 (red wine), and that’s a first for me.”

But the issue isn’t confined to Napa and Sonoma, according to Jeff Bitter, president of Allied Grapegrowers, a cooperative of 450 growers throughout the state. With fires affecting wine regions throughout the state this year, there are concerns about the quality of grapes in regions as disparate as Lake County, the Santa Cruz Mountains and Monterey County’s Santa Lucia Highlands.

Statewide, around 3.3 million tons of wine grapes will be harvested this year, a year-over-year decrease of about 15%, Bitter estimated. But, he cautioned, that number doesn’t tell the full story: Because the full intensity of smoke taint is not always apparent early on, some unknown percentage of those harvested grapes will later be deemed unfit for a bottled wine.

That’s not to say no wines will be made. There are vicinities and grape varieties that appear to have escaped the worst. Growers in Mendocino County’s Anderson Valley, for example, are reporting minimal smoke taint. Even in areas that burned, some wine grapes were harvested before the fires began, and those are considered safe. And most white wine varietals, which come off the vine earlier than reds, are out of harm’s way.

But problems with the 2020 vintage began long before the Glass Fire. Some winemakers had already given up on this year’s vintage based on the lightning siege that ignited widespread fires in mid-August.

Most of the decisions at Amici Cellars in Calistoga, for instance, came after August’s LNU Lightning Complex, said John Harris, a producer of single-vineyard Cabernet Sauvignons from some of Napa’s most famous sites, including Missouri Hopper and Oakville Ranch. As anyone who lives in the Bay Area knows firsthand, the air quality in late August and early September was poor — due not only to the lightning-sparked fires, which burned near some of Amici’s vineyards, but also to the compounded effects of wildfires throughout the West Coast.

After those August fires, Harris tried to get his grapes tested for smoke taint. With local laboratories backlogged for more than a month, he sent samples to Australia, Canada and New York, ultimately spending $50,000 in lab fees, he said. By the time the Glass Fire ignited, about six miles from his winery, he no longer needed to see any numbers. He knew intuitively that the wines would be ruined, so decided he would not release any red wines from this vintage.

Others, like Sosie Wines owners Scott MacFiggen and Regina Bustamante, were optimistic going into September. Early test results at some of their vineyards after the August fires “showed some smoke taint but not an enormous amount,” MacFiggen said. It was a situation they could live with, and they planned to start picking Syrah, Roussanne and red Bordeaux varieties from vineyards around Sonoma Valley.

But when the Glass Fire “started dumping black smoke,” MacFiggen said, those plans changed. Sosie will produce no wine at all in 2020.

The Glass Fire, in Bitter’s words, was “a nail in the coffin” for many Napa and Sonoma vintners. In a handful of cases, wines were destroyed by the fire itself: At Spring Mountain wineries Cain and Newton, for example, their just-vinified barrels of 2020 wine went up in flames along with their winery buildings. 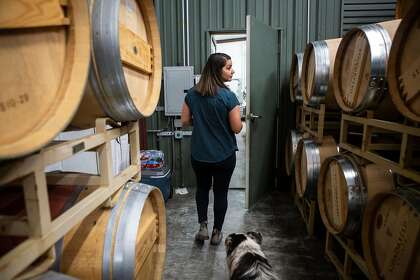 But for the rest of the region, the threat of destruction was more insidious, demanding some tough calculations. Could a winery afford grape purchases and production expenses on a wine that might be unsellable? The dearth of scientific knowledge about smoke taint only complicated matters: Some smoke compounds might not reveal themselves in laboratory tests, and there may be some amount of smoke taint that can exist peacefully within a wine, but no one really knows what that threshold is.

“There has been a lot of gray area,” said Shalini Sekhar, winemaker for boutique Pinot Noir brands including Neely and Waits-Mast. “There will be some wines that have smoke influence but not taint. These really low numbers — can someone taste that? It’s very unclear to me.”

Or, as Peter Molnar, owner of Obsidian Ridge Winery, put it: “We’re all basically in a self-driving clown car. Nobody has their hand on the wheel, and nobody knows where we’re going.”

Molnar understands the danger of smoke taint better than many. Four of the past 12 vintages at his Lake County vineyard have been compromised by smoke taint. In two of those years, the winery released the wines anyway. That was the right decision in 2015, Molnar said, when the smoke influence was barely perceptible, but probably the wrong decision in the smokier 2008 vintage. In both 2018 and 2020, his team decided not to make any wine from their estate vineyard.

Those nuanced decisions suggest that there may be a place in the market for some smoke-touched wines. “If you’re talking about $8 bottles, you can probably make it work,” Molnar said. At the low end, it can probably be diluted away: A little bit of smoke taint will be imperceptible when blended into a large volume of clean wine. But for pricier, single-vineyard bottlings that depend on a reputation for pristine quality, forget it.

“Listen, not making a vintage is sad. But filling your winery full of bad wine would be tragic,” Molnar said. “The first is a country song. The second is an opera by Wagner.”

At its worst, smoke-tainted wine “tastes like someone dropped a cigarette into it,” said French of Signorello. But many examples she’s tasted over the years have been much more subtle. “Some just have an oily texture to them, a very heavy, viscous feeling that lingers on the back palate.” In low concentrations, it may simply make the wine taste muted — less fruity, less aromatic, less expressive.

Many winemakers went ahead and picked grapes that may have been tainted, hoping for the best, and will determine later whether the wine is suitable for release. (If it isn’t up to snuff, the wineries can sell it on a secondary market where it will be made either into industrial ethanol, brandy or vinegar.) Mitigation techniques exist, like reverse osmosis, flash detente and charcoal filtering, though their efficacy is not entirely clear. Since smoke compounds nest primarily in the grape skins, winemakers may be able to diminish the impact by reducing the amount of time that wines macerate with the skins; the ultimate example of this is rosé, made from red grapes that get almost no skin contact.

“My strategy just became to get the grapes off the vine quicker,” said Sekhar. Even if she thought the grapes needed a little more hang time to reach optimal ripeness, she wanted to minimize their time exposed to smoke outdoors. At the Neely vineyard in the Santa Cruz Mountains, “we had a day that was over 400 on the AQI,” she said, air quality as suffocating for grapes as it is for humans.

Sekhar is confident that many of the Pinot Noirs she’s made this year will be delicious, even from places where fires burned nearby. “Consumers may view the vintage in a way that I think is unfair,” she said. “There’s been so much variation (in smoke damage) within regions.” Not everything is lost, she said, and “I’m only going to put out wines that I’m proud of.”

At Signorello, French decided to turn 2020 into one big science experiment. “We harvested all our estate wines, but we’re 100% prepared for it to be a learning year,” she said. She’s carefully monitoring the wines, collecting data at every step of the way and comparing it with previous vintages. If some wines turn out delicious enough to release with the Signorello label, that would be a bonus, but she isn’t counting on it. The primary goal is research — something that winery owner Ray Signorello is willing to invest in, French said. But not every small winery can afford those hefty R&D expenses.

“The biggest question mark is: How do these wines evolve as they get older?” French said.

Molnar, of Obsidian Ridge, is determined to use 2020 as a catalyst for change. He wants the industry to fund larger-scale research and to convince more farmers to sign up for crop insurance. Meanwhile, he’s reconsidering his business model. If his vineyard is going to be affected by smoke taint every four years, on average, he should make 25% more wine in the good years, he said.

In other words, he refuses to dismiss 2020, unprecedented as it may be, as an anomaly. “We live in a fire ecosystem,” he said. “We have planted vineyards inside of that fire ecosystem. We can’t let it put everyone out of business.”

Home Videos The WORLD of WINE – Wine News. Cheap wine, tasting notes and cooking with wine The World of Wine – May 2021 … END_OF_DOCUMENT_TOKEN_TO_BE_REPLACED

How to visit Napa Valley on a Budget. In this video Carson and I explain a few ways to enjoy Napa on the cheap. Tip and advice about how to visit Napa … END_OF_DOCUMENT_TOKEN_TO_BE_REPLACED

Home Videos Get To Know Argentina Wine | Wine Folly If you love Malbec, Argentina is your ultimate wine region. But that’s not … END_OF_DOCUMENT_TOKEN_TO_BE_REPLACED