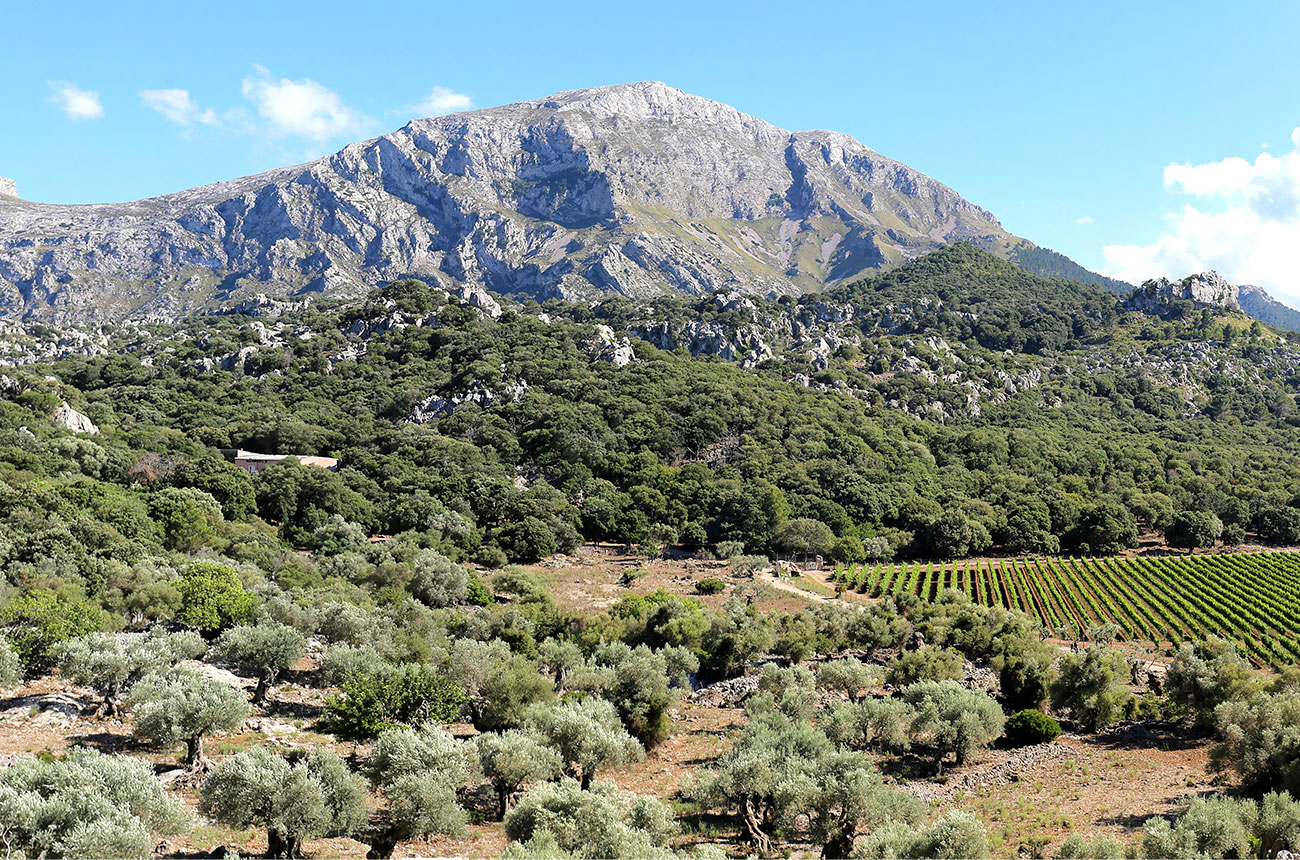 Coronavirus: Be sure to check the latest travel restrictions and refund policies before booking any trips abroad.

The largest of the five main Balearic islands, Mallorca has a reputation as a tourist hotspot for beach-loving sun seekers, but in fact most of the island north and east of its capital Palma is quite tranquil and bucolic, with charming, uncrowded rural landscapes, hamlets and villages. Take the scenic journey on the narrow-gauge railway from Palma to Port de Sóller to explore the Tramuntana mountain ridge, where you can go climbing or hiking, or cycle between wineries across the plain of Es Pla, with its low stone walls and peach and almond orchards.

The arts of viticulture and winemaking on the island go back at least to the Romans, but at the end of the 19th century the vineyards were devastated by phylloxera. Many of them were dug up, and viticulture didn’t really recover until late in the 20th century, when tourist demand for local wines led to the creation of the DOs of Binissalem (1991) on the edge of the Tramuntana, and Pla i Llevant (2001).

This has led to Mallorca having a surprising number of small wineries, now estimated at close to 100, developed by professionals and enthusiasts alike and geared towards quality wines and wine tourism. Palma de Mallorca is a convenient base, as it is easy to get to by plane or ferry – the latter from either Barcelona or Valencia, and a good option if you are already in mainland Spain and travelling by car. Over the past few years, the picturesque old town of Palma has been sensitively restored, so there is plenty to see and do (and taste!). From here, you can rent a car to get around the island. Nothing is too far away, and there are also regular buses and trains to main destinations (Binissalem, Pollença, Manacor or Sóller).

Located in the centre of Manacor on the east side of the island, family-run Vins Miquel Gelabert was founded in 1985, when winemaking in Mallorca was just beginning its recovery. Ex-chef Miquel Gelabert is affectionately known as ‘the madman of Manacor’ due to the sheer number (up to 27) of individual wines that he produces annually, along with his oenologist son. They cultivate more than 30 native and international grape varieties (some in experimentation), spread over 10.5ha of vines in 18 plots in and around Manacor. Not to be missed classics are Gran Vinya Son Caules and Sa Vall Selecció Privada, both DO Pla i Llevant, which you can try by booking a visit and tasting.

Half an hour’s drive from Palma, in Algaída, central Mallorca, you’ll find Can Majoral, founded in 1979 by Andreu Oliver, who is now assisted by his daughter Mireia and their cousin Andreu, also winemakers. In 1994, Can Majoral became the first producer in Mallorca, and second in Spain, to achieve organic certification. Oliver and his team have added a range of native grapes – including Callet, Giró Ros, Gorgollassa and Manto Negro – to the original international varieties to create characterful quality wines under the Pla i Llevant DO.

The estate’s 19ha now produce some 70,000 bottles in two ranges: Can Majoral and ButiBalausí (young wines). They maintain the tradition of a full-moon harvest, with 400-500 mostly local volunteers working until midnight, finishing with a meal in the vineyard. Tastings for up to 25 people are offered by appointment.

Call Francesc Grimalt a weirdo if you will, he doesn’t mind at all. In fact, the winemaker at 4 Kilos Vinícola prides himself on going his own way. One of the founders of Anima Negra in the southeast of the island, with nearly 30 years in the industry, Grimalt joined forces with Sergio Caballero in 2006 to embark on an organic approach to winemaking, creating mini-ecosystems with indigenous grapes and plants working in harmony. Their two signature brands – 4 Kilos and 12 Volts, both under the Vi de la Terra Mallorca designation – produce light, aromatic, terroir-driven wines that have been making a name for themselves both locally and abroad. For an informal straight-from-the-barrel winery experience in a converted sheep barn at their bodega, just outside Felanitx, book a tasting via the email address on the 4 Kilos website.

The first thing to catch your eye as you enter the village of Biniali, just south of Binissalem in the heart of Mallorca, is the striking modern structure that houses the Binigrau winery. In 2005, brothers Matías, Miquel and Sebastián Batle Pastor, having sold the family-run Bodegas Macià Batle in 2003, combined their talents to create a new project that reflected their love and respect for the land where they grew up. Here tradition meets evolution, with 55ha of old and new vines, along with modern technology, producing quality Vi de la Terra Mallorca wines that express the essence of terroir and respect age-old harvesting methods. Native grapes include Callet, Manto Negro and Prensal. Tours are available by appointment and include a tasting of four or five wines with snacks.

Finally, during your stay on Mallorca, keep an eye out for wines from two more standout bodegas that are working wonders with indigenous Callet and Manto Negro old vines. At Anima Negra philosopher-winemakers Pere Obrador and Miquel Angel Cedà are creating expressive Callet whites, designated as Vi de la Terra Mallorca, from their small bodega in Felanitx. Meanwhile, young fifth-generation oenologist Tomeu Llabrés at Ca’n Verdura near Binissalem works his magic with Manto Negro grapes from vines recovered from his grandfather’s estate, producing both DO Binissalem and Vi de la Terra Mallorca wines. Although these humble winery installations preclude visits, you can find both producers’ wines at select shops and restaurants throughout the island, and private delivery can also be arranged via their websites. Worth seeking out.

Luxury five-star hotel on a 40ha estate hidden away in Montuïri in the centre of Mallorca, with its own gardens and orchards. The spectacular Jacaranda restaurant has a daily menu and long list of local and international wines.

A five-star hotel in a 19th-century mansion in Palma old town, with 32 rooms and 10 suites, decorated with original contemporary art and photography. Has a restaurant and a rooftop terrace with a pool.

In the very centre of Palma. Michelin-star chef Macarena de Castro offers local Mallorcan cuisine from her own gardens with a dining room, terrace and bar.

Found in the pretty town of Selva. Enjoy splendid views from the terrace of this 19th-century Mallorcan house where chef Marga Coll was born and raised.

Soak up the local atmosphere by going for an evening stroll and enjoying delicious traditional tapas and excellent local wines at La Fonda.

There are frequent flights from various destinations in Europe to Palma de Mallorca. A rented car is best for visiting the vineyards, but there are regular buses or trains from Palma to many inland destinations.

Where to eat in Spain: Region by region

Home Videos The WORLD of WINE – Wine News. Cheap wine, tasting notes and cooking with wine The World of Wine – May 2021 … END_OF_DOCUMENT_TOKEN_TO_BE_REPLACED

How to visit Napa Valley on a Budget. In this video Carson and I explain a few ways to enjoy Napa on the cheap. Tip and advice about how to visit Napa … END_OF_DOCUMENT_TOKEN_TO_BE_REPLACED

Home Videos Get To Know Argentina Wine | Wine Folly If you love Malbec, Argentina is your ultimate wine region. But that’s not … END_OF_DOCUMENT_TOKEN_TO_BE_REPLACED