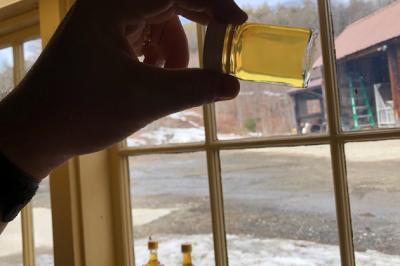 SAINTE-MARIE, Que.—It’s all about the flavor.

Joel Boutin, of Quebec, makes thousands of syrup taste samplings each year including many for a large private maple producers club, which he serves as an extension educator and advisor.

A keen observer in all aspects of maple production, he also teaches high school students at a technical school in his area.

But Boutin’s greatest area of expertise is “Good Flavor Factors,” which was the topic of his presentation during Vermont Maple Conference Week.

Depending on a variety of practices, producers can try to achieve a delicate sweet, vanilla-type taste or the more complex maple flavor that tends to become more caramel-like as the season progresses.

“The taste of the syrup is complicated,” he said. “We always have to strike a balance between what we like and what we should do as producers. There is a question of habits and memories.”

For example, syrup has been made from both sugar maple and red maple trees for many years.

“They both give a different taste, but they are appreciated by different consumer groups,” Boutin said. “If you were born and raised on the farm when you had red maple syrup, this is the one you know and like. This is the one that is best. It’s the same for people who know sugar maple better. Sugar maples have a stronger maple taste, but really we can find a market for both.”

Briefly, he noted that it’s also possible to make syrup from other flowing trees such as silver, black and Negundo maples; along with butternut, black walnut, which has a creamy taste, and beech whose syrup tastes like cherry.

Weather, microbes, tubing color, sugarbush slope and evaporation techniques are just some of the many factors that influence flavor.

Boutin sees maple production as a two-step process, just like cooking other food items in the kitchen.

First comes preparation and fermentation of the sap before boiling, followed secondly by the type of evaporation that’s chosen. “Preparation and type of cooking gives you the final taste,” he said.

He noted that there’s a direct correlation between weather and the presence of microorganisms, some of which are essential to good-tasting syrup.

“Do you have cold or warm weather, a sunny or cloudy week? That can change the condition of sap in the tubing. It will produce a different kind of syrup,” Boutin said.

For example, contamination increases during a stretch of frost-free nights.

“There are lot of little ‘people’ living in our tubing and sap tank,” he said. “They are varied. They are not dangerous. They die during boiling. Syrup is almost perfectly sterile. We should see maple syrup production the same way as making wine, cheese and bread. If there are no microbes we have no success. Maple is the same. You need a minimum of microbes to prepare the sap before it boils.”

“The development of microorganisms isn’t negative,” Boutin said. “If there’s no fermentation, we get no maple taste. If there’s too much, we get very caramelized syrup. If it’s really too much, it’s like molasses and can become ropey. So it’s all a question of balance.”

A photo of two jars of sap taken from the same tree showed the effects of fermentation. Sap just taken from the tree was perfectly clear and would produce a light-colored syrup. Sap that had been allowed to ferment was quite cloudy and would make a dark syrup.

Depending on the fermentation period, a producer could make 10, 15 or 20 different tasting syrups, which could be blended to achieve a desired flavor. “Don’t try to do just one kind of syrup,” Boutin said.

The technological advance of airtight tubing in recent years has resulted in the negative side effect of less microbes, which are essential for making good-tasting syrup.

However, there are two types of microbes.

“We need to improve the sap of very air tight tubing system by adding oxygen to promote tastes that we like,” Boutin said.

This can be done several ways, such as simply pumping it through a hose to the other side of the tank; the use of bubblers; or putting holes in PVC pipe and running sap through it under pressure into the collection tank.

“An air injector in the sap tank will increase microbial development, also,” he said.

But how does a producer know when sap is ready to boil?

One way is by using an Accu-Chek Active glucometer, a medical device designed to evaluate glucose concentration in blood, which will also tell the invert sugar level in sap.

“Evaluate the sap and find your own preferences,” Boutin said.

He also pointed out that vacuum level has no effect whatsoever on flavor. But passing sap through reverse osmosis twice instead of once will increase brix, resulting in more caramelizing.

Once sap is fermented and prepared, it’s ready to boil.

The liquid level in the pan has a major impact on taste.

In the sap pan, a half inch to an inch results in quick evaporation and a light syrup. One to two inches yield slightly caramelized syrup, and two to four inches is much more caramelized

“As you change the level you will have a big impact on color and taste,” Boutin siad.

Also, producers can increase cooking time and caramelizing by making syrup wait in the pan, and not opening the valve as soon as it’s ready.

Lastly, Boutin advised producers to get in the habit of tasting their syrup every day. If they think it always tastes good, it might be a good idea to get an outside opinion to make sure it’s really as good as the producer thinks it is.

Home Videos The WORLD of WINE – Wine News. Cheap wine, tasting notes and cooking with wine The World of Wine – May 2021 … END_OF_DOCUMENT_TOKEN_TO_BE_REPLACED

How to visit Napa Valley on a Budget. In this video Carson and I explain a few ways to enjoy Napa on the cheap. Tip and advice about how to visit Napa … END_OF_DOCUMENT_TOKEN_TO_BE_REPLACED

Home Videos Get To Know Argentina Wine | Wine Folly If you love Malbec, Argentina is your ultimate wine region. But that’s not … END_OF_DOCUMENT_TOKEN_TO_BE_REPLACED