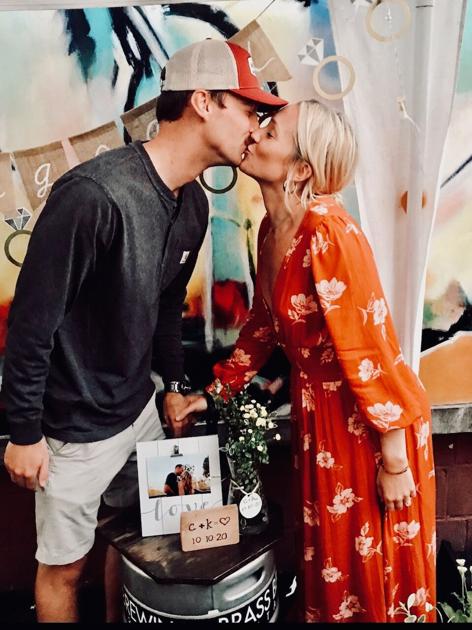 Whether you’re looking for that special someone, going steady with the one you love or celebrating an anniversary, getting into that loving feeling comes with challenges during quarantine. In this four-week series, we hear from four couples on how they created romantic moments and proved that a pandemic is no match for love.

Last fall, Carpinteria native Kelsey Whittaker thought she was headed for a quiet day of wine tasting when her boyfriend, Connor Bitzer, surprised her with not only a proposal but a micro-engagement party.

During the weeks leading up to the Oct. 20, 2020 proposal, Whittaker hadn’t noticed Bitzer’s sly trips to the jeweler or calls with her closest friends and family members, but a slip from Bitzer’s mother about “a ring” had gotten her thinking. On the drive up to the Lafond Winery in Buellton, she thought a few times about it. “I was super excited and even though I thought he might do it, I didn’t know how or when,” Whittaker said.

As they sat down outside the tasting room, Whittaker caught a glimpse of a familiar face. It was her sister, Caitlyn Damron, who was waiting with her two-year-old daughter Nora for the couple to appear. “My niece ran the ring over; it was so cute. She had the little ring box in her hand. They had rehearsed it weeks before. Connor was saying that he was super busy working but he was out designing the ring and planning the proposal,” Whittaker said.

Because of Covid-19, Bitzer had to be selective with who to invite, but he managed to have everyone who is “super important to us” – a small handful of close friends and family – “they were all hiding and popped out once he proposed!”

Among the guests was Whittaker’s mother Anne Whittaker, who locals might know as the human companion of Oliver, a popular Jack Russell in Carpinteria’s canine community.

“It was such a fun day,” Whittaker said. “Because of Covid, we did have masks on and off throughout the day and had to be very mindful and respectful of all the regulations. But we managed to still have an amazing and super special day that we both will never forget.”

Whittaker and Bitzer met at their mutual friend Dylan Hathaway’s Halloween party in 2018. Whittaker doesn’t remember exactly what either of their costumes were (she was one of the characters from Riverdale and he was a character from Breaking Bad), but she does remember the moment she first saw Bitzer. “He was standing by himself,” she said. “I asked my friends who he was, and nobody knew, so I just went over and started talking to him. I started introducing him to everybody and it went from there.” After that night, they began seeing each other every weekend and before long were living together in Summerland.

The couple hasn’t set a date yet but is thinking of a simple wedding in June 2022. “Definitely somewhere local in Santa Barbara County, definitely an outdoor wedding,” Whittaker said. “We haven’t gotten into the details yet, but I know we want it to be outdoors, simple, pretty and nothing too crazy.”

Home Videos The WORLD of WINE – Wine News. Cheap wine, tasting notes and cooking with wine The World of Wine – May 2021 … END_OF_DOCUMENT_TOKEN_TO_BE_REPLACED

How to visit Napa Valley on a Budget. In this video Carson and I explain a few ways to enjoy Napa on the cheap. Tip and advice about how to visit Napa … END_OF_DOCUMENT_TOKEN_TO_BE_REPLACED

Home Videos Get To Know Argentina Wine | Wine Folly If you love Malbec, Argentina is your ultimate wine region. But that’s not … END_OF_DOCUMENT_TOKEN_TO_BE_REPLACED