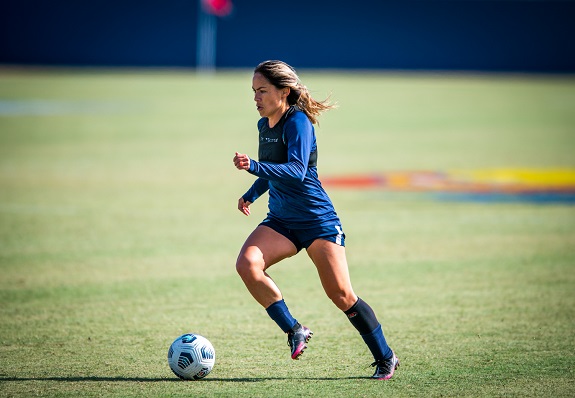 To describe last season as eventful for Lo’eau LaBonta and her Utah Royals FC teammates would be an understatement. The club dealt with COVID-19, hosting the NWSL Challenge Cup, and the Dell Loy Hansen disaster, which led to a new ownership group taking over and moving the club to Kansas City ahead of this season. “Looking back at last year, I don’t think any team had more of a roller coaster of a year than we did in Utah… on and off the field,” LaBonta told BGN. “The public maybe saw some bits and pieces, but unless you were in that locker room everyday with us you will never get the full story and experience. That year truly brought this team together because we went through it together.

“Having addressed that, I think the team is beyond motivated to be successful this upcoming Challenge Cup and season. We have players on this team who have won at every level, so we are hoping to now bring that success to Kansas City.”

The club will be known as Kansas City NWSL before establishing a permanent name and crest ahead of the 2022 NWSL season. When asked if she has any great ideas for the new name, LaBonta said, “Someone the other day threw out the name KC Heat and I was like girl you do not even know…just wait! I thought it was very fitting for part of the year, but what about the other half where we are freezing our toes off out at training?”

Lo’eau is one of the players that was a part of the FC Kansas City version of the club before they made the move to Utah. “It was bittersweet leaving Kansas City to Utah, and likewise being moved back to Kansas City from Utah,” she explained. “But now that we are back, I’m hoping this team gets the support from the city that they always deserved.”

“I’ve always said that I love Kansas City for the people and the love they have for their (male) sports teams…I hope that they give us a chance this time around.”

With her previous experience in Kansas City, LaBonta is able to play tour guide for her teammates new to the city. She said, “In terms of places in Kansas City, I’ve given numerous recs to my teammates about coffee (Broadway Café is my favorite), restaurants (Extra Virgin is a go-to), and plant shops (I’m in a love triangle with Virgil’s Plant Shop and Paradise Garden Club). Andy’s Frozen Custard is also up there with most frequently visited spots – like every other night to be exact!”

Kansas City is also where Lo’eau met Sporting Kansas City midfielder Roger Espinoza, who became her fiancé earlier this year. “The engagement took place in San Diego at one of Roger’s soccer buddy’s vineyard,” Labonta recalled. “What I thought was just a fun sunset wine tasting with Roger, Papi Chulo (Roger’s English Bulldog), and my family, turned into an absolute beauty of a ring (that Roger designed himself) on my finger. Everybody from Kansas City knows and loves Red Card Roger, but I fell in love with the softy off the field with the big heart.”

No we will not be having a soccer themed wedding pic.twitter.com/FC85fJ5KGX

How exciting is to get to play in the same city as her future husband? “Roger was supporting me and the previous KC women’s team before we even started dating, so I think he is beyond stoked to have a team back here,” she said. “He is already asking me where the best seats are at the stadium, and trying to get his teammates to invest in season tickets as well.”

Lo’eau and Roger have the unique bond of having the same occupation as one another and understanding what it’s like being a professional soccer player. “To have a partner for life who shares the same passion and love for the game is definitely for better or for worse,” LaBonta explained. “Everything is a competition. Wherever we travel in the offseason (ideally to a beach), we always pack a soccer ball just to have some fun juggling together.”

“We are currently trying to figure out how to put a Teqball Table on our wedding registry as well…ball is life!”

LaBonta and Kansas City NWSL will kick off the 2021 NWSL Challenge Cup on April 9th against Portland Thorns FC. Kickoff at Providence Park is set for 9:30 PM Central and the match will be streamed live on Paramount+.

Home Videos The WORLD of WINE – Wine News. Cheap wine, tasting notes and cooking with wine The World of Wine – May 2021 … END_OF_DOCUMENT_TOKEN_TO_BE_REPLACED

How to visit Napa Valley on a Budget. In this video Carson and I explain a few ways to enjoy Napa on the cheap. Tip and advice about how to visit Napa … END_OF_DOCUMENT_TOKEN_TO_BE_REPLACED

Home Videos Get To Know Argentina Wine | Wine Folly If you love Malbec, Argentina is your ultimate wine region. But that’s not … END_OF_DOCUMENT_TOKEN_TO_BE_REPLACED