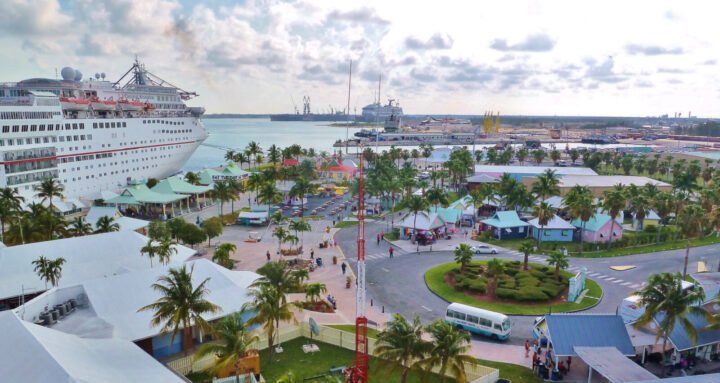 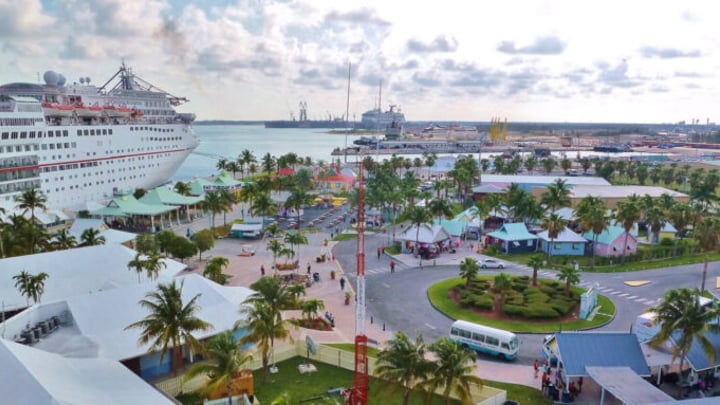 Our embarkation process from West Palm Beach, Florida, was delayed by the late release of the previous passengers by the police! Yes, the whole cruise was detained on arrival in port by police investigating the suicide of one of its passengers overnight. Apparently he had been seen jumping overboard and the ship had turned around to search for him, in vain.

Thankfully there were no such dramas on our cruise. We had purchased it as part of a timeshare/holiday club promotion. It involved an overnight on the ship, two nights at the Flamingo Bay Resort and another overnight cruise back to West Palm Beach. During the embarkation process, we were offered a chance to sign up for the specialty restaurant or book ahead for the formal dining room. There were also offers of discount wine packages, so we took that one. We also signed up for an ‘Around the World’ wine tasting, so as soon as we had put our gear in our cabin, we headed off for a very pleasant hour or so of sampling wine from the US, Spain, Argentina, France and Italy – even before the cruise departed. Other cruisers had immediately descended upon the pools and poolside deck, where there was live music and a crowd doing line-dancing! People were committed to having fun and not wasting a minute of this weekend.

Cabins on this ship were either inside or ocean view. There were no balconies. The cabins were much smaller than the ones we had been familiar with, but since you spend most of your waking hours in other parts of the ship, it does not matter. The ship was also a lot older and seedier, but perhaps we had been spoiled on the Celebrity line. Although it was a much smaller ship, there were bars, a theatre, a buffet and formal dining. Unfortunately, due to the Covid-19 crisis, this ship has since been withdrawn from service and sold for scrap.

The song “Kokomo” had always inspired me to go to The Bahamas, with its connotations of sun, sea, snorkelling and holiday vibes. Apart from that, I knew nothing about it, so I was surprised to learn The Bahamas was not actually in the Caribbean, but in the Atlantic, with Grand Bahama about 163 kilometres south-east of West Palm Beach. It is an independent country with a British heritage and is still a member of the Commonwealth of Nations. There are 16 major islands and hundreds of cays in the group, but the main ones are Grand Bahama and New Providence, of which Nassau is the capital.

Home Videos The WORLD of WINE – Wine News. Cheap wine, tasting notes and cooking with wine The World of Wine – May 2021 … END_OF_DOCUMENT_TOKEN_TO_BE_REPLACED

How to visit Napa Valley on a Budget. In this video Carson and I explain a few ways to enjoy Napa on the cheap. Tip and advice about how to visit Napa … END_OF_DOCUMENT_TOKEN_TO_BE_REPLACED

Home Videos Get To Know Argentina Wine | Wine Folly If you love Malbec, Argentina is your ultimate wine region. But that’s not … END_OF_DOCUMENT_TOKEN_TO_BE_REPLACED