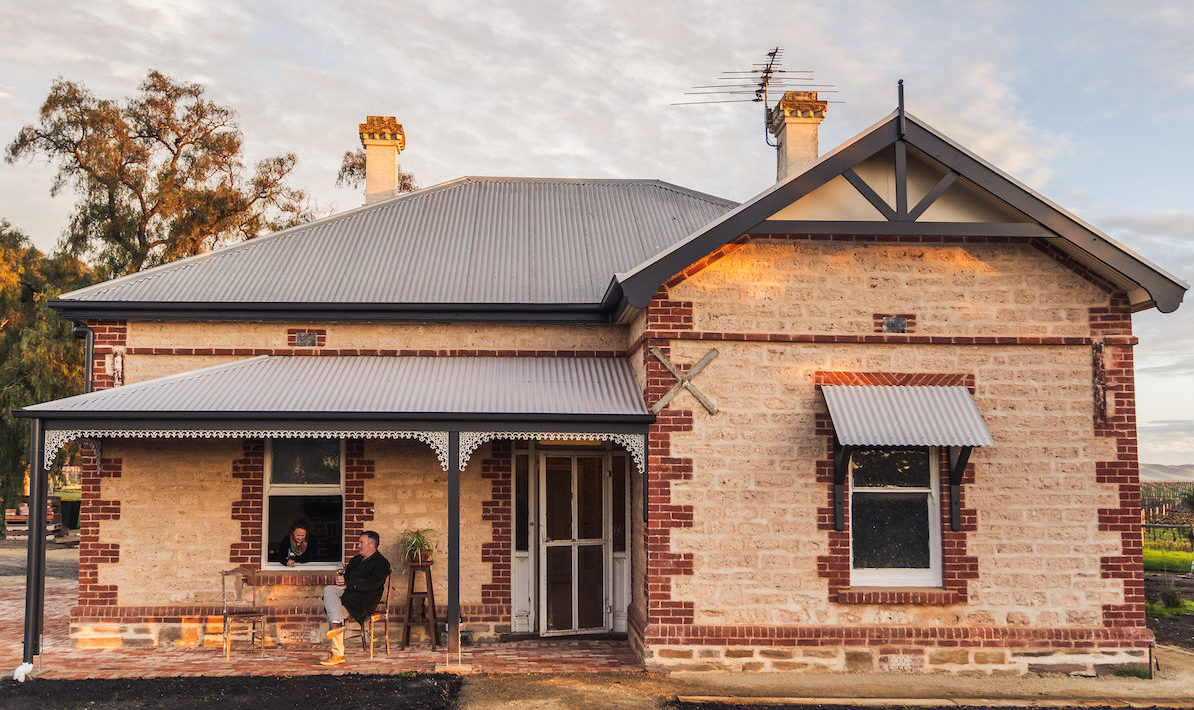 The sandstone cottage at 148 McMurtrie Road is steeped in more than a century of local history which goes back to the Sparrow family, who once owned Wirra Wirra winery.

Many McLaren Vale locals have a connection with the cottage, where friends of the Sparrows spent their summers playing tennis or swimming in the pool.

“It was actually none other than Jack Sparrow, believe it or not,” says Lino Ramble winemaker Andy Coppard.

“He wasn’t the pirate of the Caribbean, but Connor Jack Sparrow – or Jack as he was known – owned Wirra Wirra and his family built the cottage at 148 McMurtrie Road.”

Coppard is the winemaker behind Lino Ramble, a pioneering McLaren Vale label that has signed a lease with the cottage’s new owners Drew and Rae Noon, who have recently restored the charming 1897 structure.

Lino Ramble will be the first of three producers to move into the refurbished cottage, set to open as a cellar door in early September, with a date yet to be announced. Bondar Wines and Sherrah Wines will follow suit, setting up their own cellar doors in the venue.

Visitors will be able to explore the three brands at the one cellar door, which is dubbed, simply, 148 McMurtrie Road.

“I think every cellar door needs to have a point of difference and ours is to have three small producers under the one roof,” says Coppard.

Lino Ramble was established in 2012 when Coppard teamed up with friend Angela Townsend. The pair had worked together for several years at Kay Brothers where they struck up a friendship through a shared taste for lighter wine styles that steered away from McLaren Vale’s traditional full-bodied flavours and big reds.

“She’s the engine driver and I’m the winemaker,” says Coppard, who has years of experience making wines for producers such as Kay Brothers and Chalk Hill.

“I can’t count the toes on my feet; she’s much more into budgets and keeps me in line with all that.”

Lino Ramble has a focus on Spanish, Italian and Portuguese varieties, some of which are relatively new to the southern vales. These include pinot grigio, grillo, fiano, nero d’Avola, and bastardo, “which is literally bastard with an ‘o’ on the end – it is a genuine grape variety from Portugal,” says Coppard.

“We’re the first producer here to make grillo, which is a Sicilian white variety. The reason why we love Sicilian varieties is that Sicily at sea level is climatically identical to McLaren Vale,” he says.

“Climate change is something that has a massive effect on the wine industry, particularly in a warm, dry climate like McLaren Vale and we’re stoked to play our part, exploring some of these more alternative varieties that certainly have a bright future in front of them.

“We’re looking at more unique varieties that are climate-appropriate, trying to be more sustainable for the future.”

Establishing Lino Ramble enabled Coppard the creative freedom to work with styles that are new to the region.

“At Kay Brothers, I was very much a custodian of a style that had been established a long time before I’d walked the face of the earth,” he says.

“To me, McLaren Vale was just so much more than just Shiraz. We have a range of different soil types, topography, climates, stretching from quite high elevated sites in Clarendon all the way through to very hot, dry exposed sites in Sellicks Beach.

“Shiraz is still the most widely planted variety and the star of the show in McLaren Vale, but I knew that we could be doing so much more than that.

“Once upon a time, we were chardonnay, shiraz, cabernet, sav blanc sort of drinkers in Australia, but of more recent times people are much more open-minded about what they drink.

“When you look at the diversity of foods that we eat, that’s no surprise whatsoever at all.”

For the past three years, Lino Ramble has operated a pop-up cellar door at Port Noarlunga, open only on the weekends and operating out of the back of Noddy’s Antiques and Curios. The new cellar door at 148 McMurtrie Road will be open seven days.

“The response to our cellar door at Port Noarlunga was fantastic. That’s enabled us to increase our following and brand awareness, while growing our database,” he says.

“Until now, we’ve kept our day jobs and slowly built this up to a point where now we can work for ourselves.”

The new cellar door is in close proximity to producers such as Mitolo, Wirra Wirra, Primo Estate, and Hugh Hamilton.

“It is a genuine, heartfelt privilege to be a part of the history of the space going forward as well. I’m incredibly grateful for the opportunity.”

The cottage may have the potential for another small business to join, with the possibility of catering or food to service events.

“We have a pergola to go up, a bit of landscaping to do out the front and we’re ready to rock and roll. It’s very exciting times, and I can’t wait to get the door open and say hello to everyone.”

Make your contribution to independent news

A donation of any size to InDaily goes directly to helping our journalists uncover the facts. South Australia needs more than one voice to guide it forward, and we’d truly appreciate your contribution. Please click below to donate to InDaily.

Home Videos The WORLD of WINE – Wine News. Cheap wine, tasting notes and cooking with wine The World of Wine – May 2021 … END_OF_DOCUMENT_TOKEN_TO_BE_REPLACED

How to visit Napa Valley on a Budget. In this video Carson and I explain a few ways to enjoy Napa on the cheap. Tip and advice about how to visit Napa … END_OF_DOCUMENT_TOKEN_TO_BE_REPLACED

Home Videos Get To Know Argentina Wine | Wine Folly If you love Malbec, Argentina is your ultimate wine region. But that’s not … END_OF_DOCUMENT_TOKEN_TO_BE_REPLACED